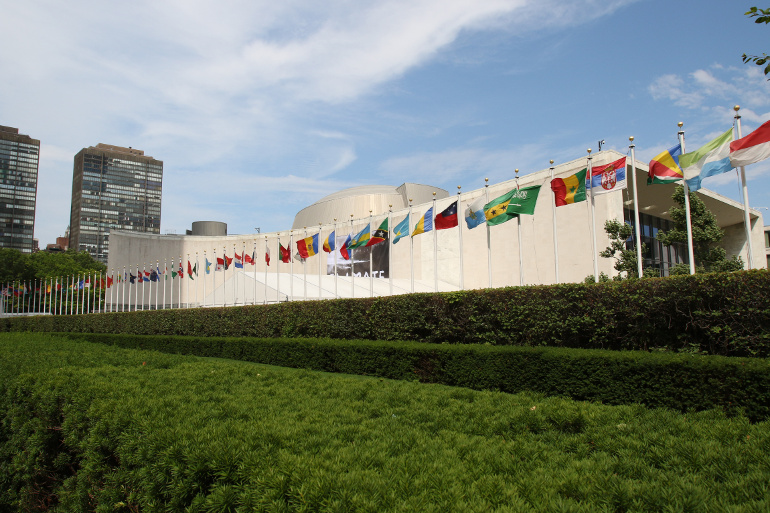 Flags of some of the 193 full member-countries of the United Nations are seen outside the U.N. General Assembly building in New York City June 30. (CNS/Gregory A. Shemitz)

The occasion of Pope Francis addressing world leaders gathered here at the United Nations Friday morning will only begin a busy week for the international body in the midst of its 70th year.

A day after addressing Congress, Francis will address the U.N. General Assembly, in what has become somewhat of a tradition when popes make their way to America. His speech comes as the U.N.’s 193-member states prepare to adopt the post-2015 Sustainable Development Goals and less than three months before the body meets in Paris for a potential binding agreement to address climate change.

It’s within that context that Francis will address the global community, in addition to the growing migrant crisis of Syrian refugees and the continued threat of the Islamic State terrorist group.

“I think there’s a lot of hope around here for his visit,” said Congregation of Notre Dame Sr. Stacy Hanrahan, one of numerous women religious working at the U.N. through non-governmental organizations. Hanrahan is part of UNANIMA International, a coalition of roughly 20 women religious congregations representing more than 20,000 sisters around the globe.

Dominican Sr. Margaret Mayce, chair of the NGO working group on social development, said Francis will come to the U.N. not to tell people what to do, but to bring “a very clear moral voice to the issues,” something often absent from the body’s discourse.

“That’s part of what NGOs try to do, we try to lift up that level. But I think he’ll speak to it loudly and clearly,” she said.

The U.N. speech has been projected to be one of the venues of Francis’ six-day U.S. visit in which he may speak to the issue of climate change and environmental protection, a central theme of his encyclical “Laudato Si’, on Care for Our Common Home.”

Those wondering what the pope might say on the topic received a sneak peak Wednesday during his welcoming ceremony at the White House. After telling President Barack Obama he found it “encouraging that you are proposing an initiative for reducing air pollution” -- likely a reference to the U.S. Environmental Protection Agency’s Clean Power Plan -- Francis went on to say, “it seems clear to me also that climate change is a problem which can no longer be left to a future generation.

“When it comes to the care of our ‘common home,’ we are living at a critical moment of history,” the pope said.

Beyond Francis’ address, the agenda for U.N. Week is loaded for its 70th year. The Sustainable Development Goals are first on the docket, set for adoption following the pope’s speech. And it’s expected that climate conversations will continue ahead of the U.N. climate change conference in Paris in December. Add to that the first address to the U.N. General Assembly from Chinese President Xi Jinping on Monday.

But it’s the Sustainable Development Goals, also known as Agenda 2030, that along with Francis’ address will grab the attention of the religious sisters.

Aimed at extending and building off the Millennium Development Goals, which expire this year, the agenda presents 17 goals and 169 targets pointed toward ending poverty and hunger, promoting education and gender equality, ensuring access to water and sustainable energy and taking action to address climate change and protecting biodiversity. Later on, indicators will be developed to measure progress made by individual nations.

While the Millennium Development Goals came up short of the objective to eliminate global poverty, they saw significant progress: in 1990, the extreme poverty rate was 47 percent; by 2015, it dropped to 14 percent.

A letter, organized by the Catholic international development agency CISDE and signed by more than 50 leaders in the area, commended many of the aims of the Sustainable Development Goals but also challenged world leaders to address the gaps and limitations. In particular, to set limits on natural resource extraction and to make a series of financial reforms.

The new set of goals was borne out of greater collaboration with the global community. Said Ursuline Sr. Michele Morek, UNANIMA coalition coordinator, “We’ve had more input into this whole process than probably ever before, in terms of being invited into the process.” She credited the greater role for civil society to U.N. leadership, in particular Secretary-General Ban Ki-moon, who sought the world’s involvement in developing the next chapter of global sustainable development.

“That’s what to me is exciting about the goals, in that so far it’s the most interconnected effort I’ve seen here,” said Hanrahan, who sits on the committees for social development and disarmament. “People are seeing these things are so connected. Everything tends to be very separate at the U.N.”

Interconnectedness is something indigenous people have stressed, the sisters said, as well as a central point Francis highlighted in his encyclical on the environment and human ecology.

“A sense of deep communion with the rest of nature cannot be real if our hearts lack tenderness, compassion and concern for our fellow human beings. … Everything is connected. Concern for the environment thus needs to be joined to a sincere love for our fellow human beings and an unwavering commitment to resolving the problems of society,” he wrote.

“The U.N. loved Laudato Si’,” Morek said. “That’s all they could talk about when it first came out [in mid-June].”

Part of the reason was while much of what he said was not necessarily new ideas -- particularly to those within the U.N. community -- he wove the concepts, critiques and questions into a cohesive, digestible document, she said, and in a way that placed his “stamp of approval” on it.

“He’s saying what we’ve been saying, but there are number of member states who really, as you can well imagine, some people just don’t want to hear it, especially in terms of the issue of climate,” Mayce said.

Some of those in NGOs saw Francis’ speech as ensuring adoption of the Sustainable Development Goals, with nations perhaps reluctant to reject an agenda largely backed by the pope; others, though, saw its passage a formality after member states signed off on the goals following intense negotiations in July.

Asked what words or phrases Francis might use that would raise eyebrows among the general assembly, the sisters cited “leave no one behind,” “integrated sense of creation,” “participation,” as well as raising the issue of women or his now-common refrain critical of unbridled capitalism. Addressing the latter point, Morek said, would be particularly significant given the growing power of corporations at the U.N.

“NGOs are worried about how in-bed with the large corporations the U.N. is getting and having to get in terms of being funded,” she said.

Francis will become the fourth pope to address the U.N., with Pope Paul VI the first to do so in 1965, when he made his famous plea for “No more war, war never again.” Pope John Paul II spoke twice to the General Assembly, in 1979 and again in 1995. Pope Benedict XVI stressed the importance of respect for human rights to the global body in 2008.

The sisters agreed that each pope spoke in different moments in time, through Mayce said Francis comes at a time when the world is “in a much more precarious state.” Issuing his encyclical before the speech -- and strategically before the Paris climate talks, which Francis said he hoped the document would influence -- gives his visit more prominence, said Notre Dame de Sion Sr. Celia Martin, another sister with UNANIMA.

“It’s such a different time right now that we’re in, and Francis seems to understand that, I think. … It’s time for bold movement and a time for him to do what he does, and that is really relate to people, the ordinary people,” Hanrahan said.