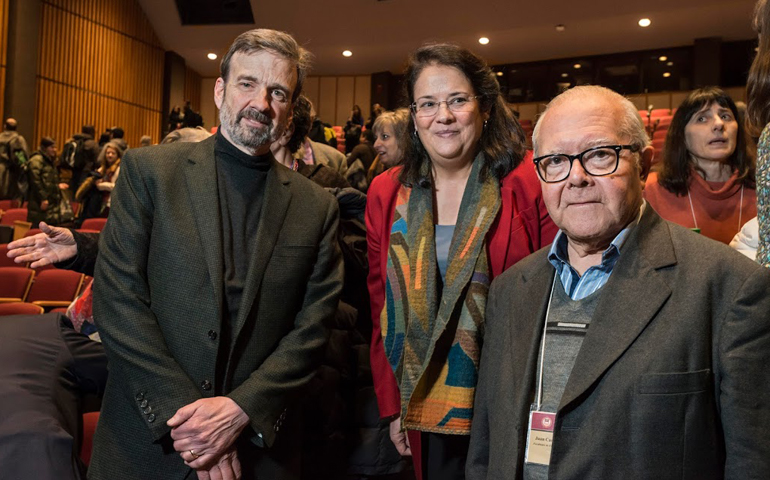 More than 40 theologians and scholars from Latin and Central America, the Caribbean, Spain and the United States gathered in a Boston College retreat center Feb. 6-10, united in their Spanish, their readiness to share each of their countries' pastoral and political realities, and their authority on liberation theology.

The gathering was an exercise in "theology with open eyes," as opposed to keeping participants "shut inside our own academic worlds," Jesuit Fr. Gabino Uríbarri from Comillas Pontifical University in Madrid told NCR.

The inaugural meeting was guided by three key issues: globalization, social and economic exclusion, and the challenge of interculturality and integration.

The conference was held entirely in Spanish, which the attendees celebrated as a unique opportunity to discuss their works in their — and the pope's — native language. This allowed participants to "shape our collective theological imagination in some new ways," explained Nancy Pineda-Madrid, associate professor of Latino theology at Boston College.

The conference demonstrated the pope's shared worldview with his fellow Latin Americans, as his unwavering preference for the poor is a product of Argentine liberation theology. And the movement's founders — his seminary professor and founder of liberation philosophy, Jesuit Fr. Juan Carlos Scannone, and Dominican Fr. Gustavo Gutierrez, regarded as the father of liberation theology — attended the conference, and later led a public forum at Boston College's Robsham Theater, Feb. 8.

"We've felt the presence of the pope" throughout the gathering, said Jesuit Fr. Carlos María Gallí, dean of theology at the Pontifical Catholic University of Argentina in Buenos Aires, Argentina. Gallí also worked as a close collaborator with Pope Francis when he was archbishop and chancellor of the university.

"Here we built bridges between theologians in different regions of Latin America and the Iberian peninsula, but it's now our turn to build bridges in our own lives and continue the message of Pope Francis," he told NCR.

Presentations throughout the week covered a range of issues, including populism, evangelization, the environment, theology in politics and acculturation.

For 31-year-old Raúl Zegarra, a Peruvian doctorate student of theology at the University of Chicago, the conference struck him in its demonstration of plurality with unity.

"In the discussions you see such different tones, orientations, colors, types of theologies," he said. "But they're all working within the same key points: preference for the poor, enculturation, how we think of the reform of the church, and how we think of lay theologians joining the structures of the church in ways.

"Being in the younger generation, it was great to see how these people work on different things yet are unified by the core set of values that they see in Francis' papacy."

Fr. José Caamaño of Catholic University in Buenos Aires said the conference took doctrines that they all know "in the abstract" and had them "translated in concrete experiences" throughout various Latin American frontiers.

"Those in the United States seem to think that Latin Americans can interpret [Francis] quickly. I'm sure that someone from Boston or [Washington] D.C. might wonder, 'What's this guy trying to tell me? What are the injustices he's referring to?' So, Francis' thinking is like an agenda for this gathering and serves as an articulation of a universal message," he said.

Kicking off the first full day of the conference, Gutierrez — from Lima, Peru, but now the John Cardinal O'Hara Professor of Theology at the University of Notre Dame in South Bend, Ind. — discussed poverty and the importance of the pastoral, quipping that "theology is like frozen meat: everything you need is there, but you can't eat it."

While poverty was a common theme among the group's presenters, Gutierrez and several others also touched on populism — a creeping worldwide trend and a backlash to globalization.

"You can't talk about a global populism," Emilce Cuda, a research professor at Catholic University in Buenos Aires, told NCR. "It could be from the right, as is the case in the U.S., or the left, like in Bolivia — but they are each particular. You can't apply a global rule because the conditions (like the economy, its history, or the social situations) are so different."

This is where theology can come in handy, she said, arguing that mixing religion and politics is not the same as mixing theology and politics. Cuda invoked Pope Benedict XVI, who (before becoming pope) argued that religion alone is free of philosophical arguments, and serves as more of a support system. Theology, in turn, takes on elements of Greek philosophy and becomes a critique of religion.

"What Christian theology does is it displaces religion as a form of collaborating with the state to achieve political ends. … Theology says that what is divine is not immanent to the Earth, but transcendent," Cuda explained, pointing to a time when Roman emperors were seen as consecrated figures.

"Theology must desecrate law," she said, because laws are manmade and therefore modifiable. Legalized abortion, for example, is not sacred simply because it's legal. Nor is public opinion sacred, which may fuel governments to act for the popular vote.

"Politically, I think theology is applicable to this specific moment in history, as we see a shift toward populism."

Though conflicts may be shared throughout the world, theological discernment must be localized, said Jesuit Fr. Luis Guillermo Sarasa, from the Pontifical Xavierian University's School of Theology in Bogotá, Colombia.

Poverty, inequality, lack of education, health and social services are all common problems in Latin America, he said, and "ones we can attack and counter together. But we need context."

"Colombians need to be who fix Colombia — not Mexicans."

But connections can be drawn between locales, he added. For example, Colombians have already lived through the tragedies brought by narco-trafficking, and could provide assistance to Mexico's current war with drugs. Likewise, Colombia, in reaching its recent peace accords, has learned from countries who have already established peace treaties, including El Salvador, Guatemala, South Africa and Northern Ireland.

"That's the way we can connect ourselves, by helping each other with realities we've already tackled … That's what Laudato Si' [Francis' 2015 encyclical on the environment] is about: everything is connected. We're all responsible for everyone, to a certain extent and with certain limitations."

Just as countries can find connections through sharing realities, Olga Consuelo Veléz, a professor at the same university in Bogotá, would like to see theologians from different disciplines find points of connection. For example, she says, a feminist theology should consciously deal with impoverished and indigenous women, too.

Veléz encourages theologians to take that step, "so that contextualized theology can permeate and respond to these needs from various complex realities. The pastoral approach can't be the same everywhere," she told NCR.

"We know the face of the poor, but one needs to put a visible face on theology, especially since communities are pluralistic. You have indigenous communities living in the cities, and LGBTs now live explicitly in the universities — so how do you incorporate them in the conversations? These are questions we need to ask ourselves."

For Pineda-Madrid, this weeklong gathering at Boston College especially brought the question of gender "sharply into the fore."

"In many ways, gender was the elephant in the room," she said, noting that all the major plenaries were delivered by male theologians, despite a number of women theologians present who have made significant theological contributions.

While many U.S.-Latino theologians demonstrated a greater comfort in discussing the issue of gender and had "identified it as of vital import to our conversation," she said, "it was likewise clear that the majority present were not interested in the conversation."

"Without attention to gender, the preferential option for the poor, which everyone wanted to discuss, becomes an abstraction. An overwhelmingly disproportionate number of the poor are women. And if we're going to take the poor seriously, we have to deal with gender."

On the subject of enculturation, Carmen Márquez Beunza, a professor at the Comillas Pontifical University's School of Theology in Madrid, drew from what she witnesses living in Europe. She spoke on migration, identity crises, and the tension between multicultural and nationalist politics.

She, too, invoked Francis, a man "who came from the peripheries, and who had the experience of being the son of immigrants. He's carried keys which give clues as to how the church should respond and act as a church in the future."

Bishop Raúl Biord Castillo of La Guaira, Venezuela, one of two papal delegates who are to present the group's work to Francis, reminded those attending the conference that "the church doesn't have a mission; the mission has a church."

In the case of the church, he told NCR, "Our mission needs to come from a theological place."

"When a diocese says, 'What's our mission this year?' that's a reductive concept of mission. Oftentimes we think that a mission is something we have to do, and that's how it's been assumed at various organizations and think groups, etc. — the 'what to do.' Mission isn't even about having more people enter the church. It's about being witness to God's love that includes all people."

"Nobody is baptized a priest, or baptized a bishop," he continued. "We're all baptized as laypeople. And as baptized laypeople, we must be God's missionary disciples. So in that spirit, which Pope Francis invites us all to be a part of, we must all consider what that mission consists."

Though the gathering heard from people who live thousands of miles apart, their deliberations were laced with common themes. In a statement issued at the end of the conference (See related story), they invoked Pope Francis, saying that like a shepherd with his flock, "theologians must smell like their people and their streets; thus the need to pay back the pastoral debt that professional theology has with our poor people."

What does this meeting portend for the future? "It's difficult to say how this meeting might affect the trajectory of liberation theology," Gutierrez told NCR. "We have to take this experience and continue it. Sometimes you can have interesting meetings, but they stay there. Clearly that's not the intention here."

"This gathering was very communal, and that's how liberation theology was born."