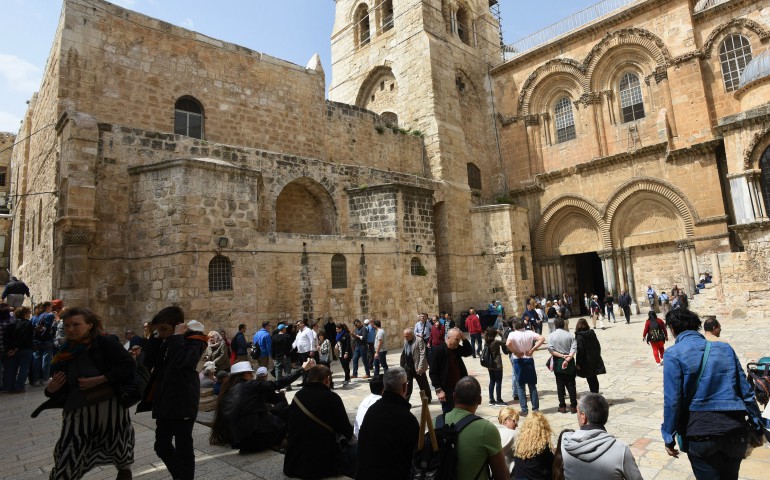 Tourists are seen outside the Church of the Holy Sepulcher March 23 in Jerusalem. U.S. President Donald Trump is expected to visit the site after the Western Wall. (CNS/Debbie Hill)

The Middle East has never been the center of stability and certainty, but President Donald Trump's visit to Israel and the Palestinian territories May 22-23 has pundits and politicians encountering an entirely new level of uncertainty.

"I can't remember a time when there was such a lack of knowledge on such a central subject to the Israeli public," said Yedidia Stern, the vice president of the Israel Democracy Institute and a long-term observer of Israel-U.S. relations. "No one knows even how to guess what could happen," Stern added.

In a series of high-profile meetings, visits, and an anticipated speech at the Israel Museum, Trump is expected to lay out his plan for how he will approach the Israeli-Palestinian conflict during his administration.

One of the major issues he could address is moving the U.S. embassy from Tel Aviv to Jerusalem. Additionally, politicians are carefully watching to see Trump's attitude towards the Palestinian territories. Trump's position could fall anywhere; he could recommend freezing construction of Jewish settlements in the Palestinian territories in order to jumpstart the peace negotiations, which would please the Israeli left, or, at the other extreme, lend support of an annexation of certain parts of the West Bank for additional Jewish construction, which would please the Israeli right.

During his campaign, Trump frequently promised to move the U.S. Embassy from Tel Aviv to Jerusalem. Although Jerusalem is the country's capital, all countries have their embassies in Tel Aviv. This is done to avoid alienating the Palestinians, who also recognize East Jerusalem as their capital. The United States has a large consulate in Jerusalem, but the embassy is on Tel Aviv's seafront promenade.

News reports citing White House officials May 18 said that Trump had postponed indefinitely moving the U.S. Embassy to Jerusalem, suggesting that Washington did not want to inflame tensions in the region. The amount of discussion and speculation generated by Trump's talk about the embassy is just one example of the uncertainty that surrounds his trip here.

Moving the embassy from Tel Aviv to Jerusalem would have been a largely symbolic gesture to Prime Minister Binyamin Netanyahu's right-leaning government, but it could have large repercussions across the Arab world and incite waves of violence just before the holy month of Ramadan, which starts at sunset May 26. Arab countries strongly oppose the move, and Trump and his administration have backed away from that stance in recent weeks.

"A month and a half ago, Israel really thought that Trump was a kind of Messiah," said Stern. "Not just that the embassy would move, but we'd be annexing some or all of the [Palestinian] territories. Finally, after 50 years, we'd be able to get rid of the Palestinian problem. Even up to the level of government ministers, they believed this, including [right-wing Education Minister Naftali] Bennett and others."

"Now, there's a completely different situation, from euphoria to suspicion," he added. Former President Barack Obama and Secretary of State John Kerry were more left-wing than most of the Israeli public, but they were also perceived as "all talk and no action," said Stern. "This is a brutal leader, almost a 'dictator-lite' — we have no idea what he wants, but he is all about action," said Stern. "There is a fear, maybe we'll go back to the situation of Obama and Kerry, but we might even go backwards from that."

"The man is very erratic, but he's a man you don't want to tackle with if you don't want issues," said Professor Robbie Sable, a professor of international law at Hebrew University who was part of the negotiating team for the peace process with Egypt in 1979.

Sable struck a more optimistic note ahead of Trump's visit. "The man has spent all of his life in real estate," he said. "He may be looking at [the Israeli-Palestinian conflict] not as a philosophical or emotional issue, but as a real estate deal that can be done."

Sable recalled that no one in Israel had believed that the country could ever make peace with Egypt. "The past has proved that when we have someone who is really great at peace, that's what the Israeli public wants," said Sable.

According to the Tel Aviv University/Israel Democracy Institute Monthly Peace Index for April 2017, more than 65 percent of the general public supports negotiations between Israel and the Palestinians, but only 26 percent believe these negotiations will lead to peace.

Even before Trump arrived in Jerusalem, planning for the visit has been beset by a series of small crises and political slights. The most glaring issue was the disclosure that Trump had revealed classified information to Russia, reportedly from Israeli intelligence, prompting outrage in the Israeli security establishment.

Trump will also be the first sitting president to visit the Western Wall, Judaism's holiest site that is located in the Old City. Presidential candidates and former presidents often visit the Wall, which is located in East Jerusalem. But international politicians generally refrain from visiting East Jerusalem, part of the capital that Israel annexed during the 1967 Six Day War.

When Netanyahu offered to accompany Trump to the wall, a Trump staffer reportedly shot back that the Western Wall is "not your territory," which incensed Israelis. The White House quickly distanced themselves from the comments, claiming they were "not authorized."

It's also the little issues, like Secretary of State Rex W. Tillerson's reference on "Meet the Press" to "Israel and Palestine," rather than the more common "Israel and the Palestinians" designation, are worrying the Israeli leaders and public that Trump's administration simply doesn't possess the nuance and sensitivity required for Mideast negotiations.

To avoid the political message that accompanies going to the Western Wall, almost every politician who comes to Israel has an official wreath-laying ceremony at Yad Vashem, the country's Holocaust Museum. Trump raised eyebrows by initially claiming he was too busy to visit Yad Vashem, considered a political affront. He eventually acquiesced to a 15-minute visit.

Trump will arrive in Jerusalem the day before the 50th anniversary of the Six Day War, which the Israeli government is marking with massive celebrations about the "reunification of Jerusalem." Events to mark the 50th anniversary of Israel's military victory against three Arab armies have been going on for some time, but they will reach a fever pitch on May 24, the anniversary according to the Hebrew lunar calendar of the capture of the Western Wall — and the day after Trump leaves.

If Trump is going to recognize Jerusalem as Israel's capital, or announce the embassy move, there could hardly be a more symbolic time to do it, noted Stern. There is symbolism in his trip beyond the political arena as well.

"According to the agenda of the visit, he's really emphasizing the issue of religion," said Amnon Ramon, a senior researcher with the Jerusalem Institute for Policy Research of Trump's decision to visit the cradles of three monotheistic religions on his first trip abroad. During his visit to Jerusalem, Trump is expected to visit the Church of the Holy Sepulcher after the Western Wall. He may also visit the Church of the Nativity in Bethlehem with Palestinian President Mahmoud Abbas.

"He was supposed to be close to the American religious right, but he's a bit of a strange chicken," said Ramon, an expert in Christian issues in the Middle East. "Some of them voted for him, but in terms of his life values, the way he talks and the way he treats women, some of them are now saying 'I don't know.' "

Ramon hypothesized that the meeting with Pope Francis at the Vatican May 24 and the church visits could be Trump's attempt to "re-Christianize" himself to the American public. But even his visit to the Church of the Holy Sepulcher, which is jointly managed by Orthodox, Catholic, and Armenian* Christian leaders, could raise questions about who will guide the tour.

Trump was originally expected to give his major address in Israel at Masada National Park, an archaeological site dating to the year 73 AD. It was desert fortress built for King Herod, where hundreds of Jewish zealots barricaded themselves against the invading Roman army. Rather become captured and enslaved by the Romans, the rebels committed mass suicide.

Today, the site is a place of "supernationalism," said Stern, of the Israel Democracy Institute. The army's infantry unit holds their induction service there, and more than 750,000 people visit each year. The slogan of the site, "Masada will never fall again!" eerily echoes Trump's "make America great again." Trump's choice of location was hailed by right-wing Israelis before he eventually changed the location to the less charged Israel Museum.

Stern hypothesized that this could mean Trump will be giving a more liberal speech, where he could demand concessions from Israel. "There would be dissonance if he talked about a settlement freeze [at Masada]," he said. "I don't know if Trump's people are sophisticated enough to understand that."

Amanda Weiss, the director of the Bible Lands Museum Jerusalem, who personally guided George W. Bush through the museum during his 2008 visit, called Trump's original plan to speak at Masada a "recognition of the importance of history" in the region.

"The power of the history of this land and its connection to our future cannot be separated," she said.

"This situation [in Israel] is not a good situation, we need to make a change, and maybe it's going to take someone as unpredictable as Trump," Weiss added. "Even though he's a little bit scary because he's so unpredictable, I'm a positive thinker and I decided I'm going to take the positive perspective. We have an opportunity we've never had before —someone who's not going to be plowed down by the political machinery into submission."

* This article has been updated with the correct leaders of the Church of the Holy Sepulcher.