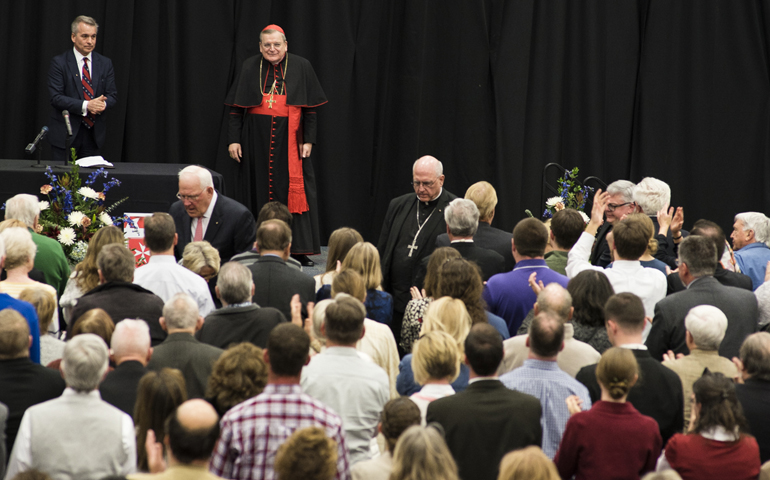 It was a stump speech. A speech filled with familiar themes for those who've been on the beat for a while.

But for a crowd in a packed Catholic high school gymnasium in Lenexa, Kan., on a Friday evening, it was a speech filled with red meat, a reassuring message that the crowd applauded and which explained why they call Cardinal Raymond Leo Burke, "Leo the Lion," courageous and outspoken.

Burke's Feb. 9-11 tour of the Kansas City metro area included two public Masses — one each in the extraordinary and the ordinary forms — a public address and a luncheon with the local chapter of the Catholic Medical Association, and was a calm harbor from the storms of controversy that have swirled around the cardinal as of late.

Already buffeted by his calls for Pope Francis to clarify parts of his teaching, Burke found himself in more stormy seas in mid-January over troubles in the Knights of Malta, an ancient chivalrous order that traces its roots to the crusades and today maintains a worldwide prestigious membership and thousands of charitable causes. Burke is the order's spiritual patron. In January, Francis appointed a papal delegate to oversee the order.

Three days before he arrived in the heartland, a front-page New York Times story linked the American cardinal to the Trump administration through White House chief strategist Stephen Bannon. According to the Times article, the pair met in April 2014 when Bannon was in Rome to cover the canonization of Pope John Paul II and to recruit a Vatican correspondent for his Breitbart News.

Bannon found his correspondent — Thomas Williams, a former priest of the Legionaries of Christ, the international order known for its conservativism and for its founder, the late Fr. Marcial Maciel Degollado, a pedophile who fathered children with two women. Williams, an American, had built a career as a Rome-based academic whose suave, camera-friendly demeanor made him a minor media celebrity.

Williams resigned from the priesthood in May 2013; a year earlier, it became public that he had fathered a child several years before that. In December 2013, he married the child's mother, Elizabeth Lev, daughter of a former U.S. ambassador to the Vatican, Mary Ann Glendon.

During that 2014 visit, Bannon also met Burke. Bannon would go on to make Breitbart News a platform for alt-right politics and two years later guide Donald Trump to the presidency. Burke, meanwhile, would emerge as a spokesman for the opposition to Francis.

According to The New York Times, Bannon and Burke still keep in touch via email. The article tries, but ultimately fails, to build a case that Bannon is seeking influence in the Vatican. Longtime Vatican watcher Robert Moynihan, editor of Inside the Vatican, called the Times story "disappointing."

On his blog, Moynihan wrote, "Though mildly interesting, [the article] gives no evidence to support its chief thesis," which Moynihan said is "that the election of President Trump (and the rise of his advisor, Steven Bannon) is being seen by 'Catholic Traditionalists' as a chance to 'derail' the agenda of Pope Francis."

More worrisome in Europe was Burke's meeting Feb. 2 with Matteo Salvini, a right-wing Italian nationalist and head of the Northern League party who is a staunch Trump supporter and critic of Francis' outreach to migrants and refugees.

That meeting was the impetus for a scathing op-ed attack on Burke in The Washington Post by freelance writer Emma-Kate Symons, under the headline "How Pope Francis can cleanse the far-right rot from the Catholic Church." The op-ed was incendiary, but one of Symons' points was that Burke's meeting with Salvini was "a flagrant political intervention on the side of the extreme-right racist grouping ahead of the Italian elections."

In Kansas City, Burke refused requests to talk to the media. Pressed for an interview on Feb. 12, Burke told NCR, "We are not doing that [granting interviews] at this time."

Burke's supporters in Kansas paid little heed to the articles in either the Times or the Post.

The main event for the 68-year-old Wisconsin-born cardinal was the Second Annual Defense of the Faith Lecture for the Kansas City region of the Knights of Malta. An estimated 1,200 people filled the bleachers and banks of chairs that lined the basketball court in the gymnasium of St. James Academy, a Catholic high school in a Kansas City, Kan., suburb.

Burke sat behind a table on a raised platform and read for 45 minutes from a prepared text. He made passing reference to Pope Francis in his introduction and quoted Popes Benedict XVI and John Paul II a half a dozen times each. He quoted Pope Paul VI three times, twice citing Humanae Vitae, Paul's 1968 encyclical upholding church teaching condemning artificial birth control. Highlights for the address include:

Patrick Stoops, 29, told NCR he came to the talk because he has "tremendous respect for Cardinal Burke and his dedication to orthodoxy and the courage he has shown in the face of resistance from certain members of the clergy and the culture in general."

This is a time with too much timidity, Stoops said, and Burke "is definitely bringing a message of boldness and confidence and trust."

A version of this story appeared in the Feb. 24-March 9, 2017 print issue under the headline: Kansas crowd applauds Burke's stump speech.