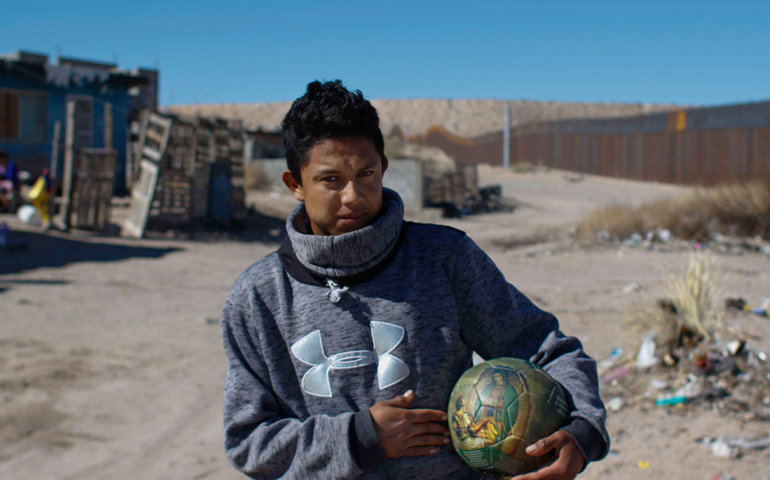 A young man holds a soccer ball with an image of Our Lady of Guadalupe Jan. 26 in Ciudad Juarez, Mexico, near the U.S.-Mexico border fence. (CNS/Alejandro Bringas, EPA)

On Tuesday, President Donald Trump directed his administration to arrest and deport any undocumented immigrants they can find, regardless of their criminal status.

As of Feb. 21, the Department of Homeland Security permits law enforcement to act immediately in raiding immigrant communities and detaining people with chargeable offenses (including those who have crossed the border illegally), those who receive welfare benefits, and those with minor infractions (such as driving without a license).

"Administration officials said some of the new policies — like one seeking to send unauthorized border crossers from Central America to Mexico while they await deportation hearings — could take months to put in effect and might be limited in scope," The New York Times reported. "For now, so-called Dreamers, who were brought to the United States as young children, will not be targeted unless they commit crimes, officials said on Tuesday."

The news broke days after the anniversary of Pope Francis visiting the U.S.-Mexico border and celebrating Mass, in which he pleaded for mercy toward migrants. Later, aboard the papal plane, he said building walls is not Christian.

Less than a week before the Trump administration's announcement, Faith in Public Life hosted a telephone town hall Feb. 15 in which the three participants drew from their personal experiences with migrants and refugees to offer reflection and calls to action. On the call was Jesuit Fr. James Martin of America magazine; Missionaries of Jesus Sr. Norma Pimentel, executive director of Catholic Charities in the Rio Grande Valley in Texas; and Julieta Garibay, co-founder of United We Dream, the largest youth-led immigrant organization in the country.