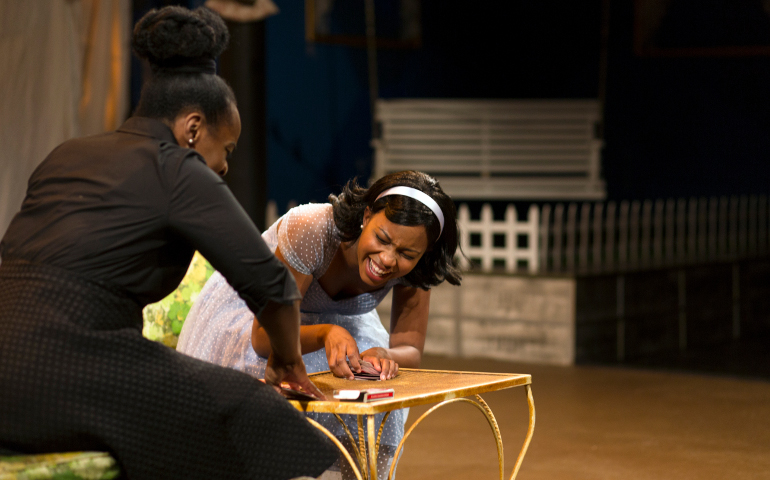 Maechi Aharanwa and Renika Williams perform in the world premiere of “Sweet” at the National Black Theatre in New York. (Peter Cooper)

Transformation begins even before the curtain rises at the National Black Theatre. Incense and the sound of a waterfall greet audience members as they walk through the door of the building on Fifth Avenue at 125th Street in Harlem. African art in the lobby and the stairwells leads up to the third-floor performance space, where a dramaturgical lobby exhibit tied to the current play helps visitors enter the world they are about to experience.

“We present the magic of black theater. We’ll see you on the other side of the journey,” a recorded message announced before the start of an autumn performance of “Sweet.”

Magic and journey are two key words to describe the work and the evolution of this nearly half-century-old off-Broadway theater complex, begun in 1968 by Barbara Ann Teer, a black actress disgusted by the roles being offered to people of color.

“My mother was always interested in the liberation of her people and community,” said Sade Lythcott, Teer’s daughter who is the National Black Theatre’s CEO. “She knew and knows that our highest self is our spiritual self. We work very, very hard to create an environment that evokes a certain kind of peace and stillness.”

Although Lythcott sometimes uses the present tense when talking about her mother, Teer died unexpectedly in 2008 at the age of 71. Lythcott gave up her career as a fashion stylist to carry on her mother’s legacy.

“One of our founding principles was holistic producing,” Lythcott said, explaining that NBT’s plays and the related lobby exhibits focus on “something the community is wrestling with.” Performances are always followed by a talkback so audience members can share their thoughts on what they have seen. Before they leave the theater, they are encouraged to close their eyes and join in a unifying breath.

“Great art is meant to be discoursed and digested,” said Lythcott who shared her comments by speaker phone with Jonathan McCrory, director of the Theatre Arts Program, who sat at a table in the theater’s crowded office space. “People are hungry for dialogue. Our aim with every show is to build community. When you set that context, people want to stay. It’s not academic. It’s shared human experience.”

For the fall performance of Harrison David Rivers’ “Sweet,” a coming-of-age story about two sisters in an all-black town in western Kansas in the late 1960s, director Raelle Myrick-Hodges’ staging had clotheslines with laundry extended down the aisle to the entrance of the theater space so audience members could immerse themselves in the characters’ world.

McCrory said the intention is to dismantle the separation between audiences and the art they are experiencing.

“People want to absorb as much as possible,” he said.

They are offered plenty to absorb at the National Black Theatre. Besides producing plays for its MainStage that tell “authentic stories of black lifestyle,” the company offers two opportunities for script development: the I Am Soul Playwright Residency Program and Keep Soul Alive Mondays, a reading series for black playwrights to showcase new work every second and fourth Monday.

The performing arts are well-represented at the National Black Theatre, but so are the visual arts. With the help of a Ford Foundation fellowship, Teer took her first trip to Africa and ended up commissioning and bringing back to Harlem seven traditional and contemporary Nigerian artists from the Osun-Osogbo Sacred Grove to carve interior and exterior artwork using tools and methods spanning seven generations. This art collection is the largest of its kind in the Western Hemisphere and is open free for all to view during the theater’s operating hours. It is popular with New York school groups and tourists as well.

All of these efforts are maintained by city, state and foundational support and by individual donors. Teer bought the property in 1983, helping to secure the theater’s future.

Over the years, the theater’s demographic has shifted significantly from its original nearly 100-percent black audiences to the current level of between 50 and 60 percent black. This has occurred partly because the neighborhood has been gentrifying and also, Lythcott said, because the theater’s shows are consistently reviewed by The New York Times, which is a major way to be singled out among the many, many off-Broadway companies in the city.

Because of all its hard work and creativity, the theater’s recognition extends beyond New York City. Curators of the Smithsonian’s National Museum of African American History and Culture visited the organization’s archives for information to include in the new institution.

When the National Black Theatre began in the late 1960s, it was one of maybe a thousand black theater communities around the country. Now it is one of the few left. McCrory attributes this in large part to the security provided to the Harlem theater in owning its own space.

“It was our founder’s vision,” he said. “She understood that if we own our land, we can weather whatever comes. We attract loyalty from the community with our unique pedagogy. People find out who we are.”

Lythcott said people have taken “spiritual ownership” of the organization.

“We look at ourselves as a service organization,” she said. “It’s a reciprocal flowing benefit to all parties on either side. That’s where the healing starts. We are for the community first. There’s spiritual energy and healing in everything we do. Our space is like a church. Audiences feel like they matter.”

Looking ahead to the theater’s 50th anniversary in 2018, Lythcott expects that exciting new works lie ahead, even in what she calls “the scariest of times now for our generation.” She compares the racism surrounding Donald Trump’s candidacy and election to that of the civil rights era in the 1960s.

“I’m super hopeful now. This time feels so dark, but I know the response from artists will shift into a new consciousness. We’re always pushing the envelope about what black culture looks like.”

McCrory said people in the black community aren’t at all surprised by the hatred being expressed.

“It’s not bad or worse. The veil is gone, the protective veil. Now we’re having to reckon with the muck. It’s been like that ever since our people came to this country. Now the chickens are coming home to roost. We, as an institution, meditate on freedom inside oppressed systems.”

Lythcott sees an enhanced opportunity to respond to the community’s needs.

“After the election happened everybody was reacting. Our instinct was to be quiet and listen. Now more than ever theater can be a safe haven for all that is possible. We can be a sanctuary for artists to express themselves within that friction.”