The Dec. 16, 2021, issue of the student magazine Elevate had just published when Maria Lynch, a faculty journalism adviser at Regis Jesuit High School received an email from Principal Jimmy Tricco. 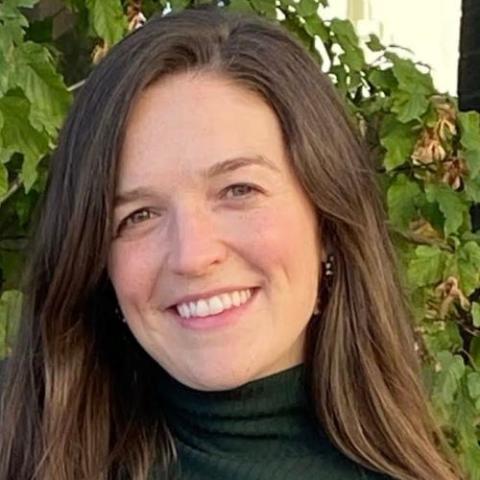 "Provocative piece for sure, which makes for good conversation," Tricco wrote in reference to "The Battle for [Our] Bodies," an opinion essay that a female student at the Catholic school in Aurora, Colorado, had written in favor of abortion rights.

In that email, a copy of which Lynch provided to NCR, Tricco twice thanked her and Nicole Arduini, the other faculty journalism adviser, for their work in publishing the latest issue of Elevate. Tricco also said he appreciated the student sharing her thoughts and added that he would reach out to her after the winter break to get her take on the Catholic approach to life issues and the school's mission.

Less than a week later, Tricco and the school's human resources director notified Lynch in an email that she was being fired for "poor judgment" and "personal misconduct" that they said had brought scandal to the school and "seriously damaged" its reputation. They also accused her of "not supporting the Mission and faith dimensions of Regis Jesuit High School." 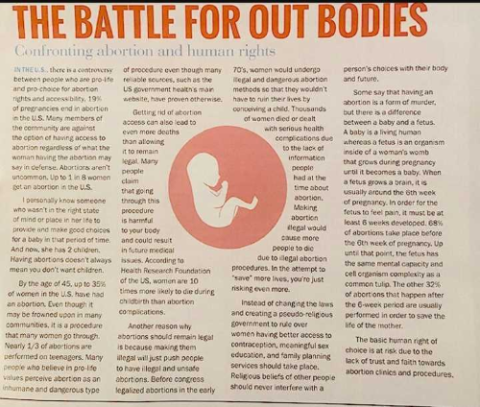 School officials at Regis Jesuit High in Boulder, Colorado, retracted the December issue of Elevate magazine and fired two journalism advisers because of this essay expressing a pro-choice view.

"It's surprising," Lynch told NCR about the termination notice she received six days after Tricco's original email. Arduini was also fired amid complaints lodged with the school and the Archdiocese of Denver. Regis' administration "retracted in full" Elevate's Dec. 16 issue and is overhauling the school's journalism program.

"I think appropriate corrective action would have been to work with us to edit the editorial policies rather than to fire two teachers who had just started in the position this year," Lynch said.

The editorial policies — which have since been removed from Regis Jesuit's website — stated that faculty advisers could not censor student-written stories and editorials with the exception of content relating to crimes and legal matters, obituaries and termination of school employees. Lynch provided NCR a copy of those policies.

Contacted by NCR, Arduini declined to speak at length about her firing, other than to say that the entire situation "saddened" her.

Lynch, who told NCR that she is pro-life and that she "frequently and fearlessly" shared those beliefs with her students and colleagues, said she followed the school's editorial policies.

"This situation seems to be a product of the larger society that can't imagine that a pro-life teacher would allow, via editorial policies, a student to publish a pro-choice article," Lynch said, adding that she welcomed challenges to the church's teaching on life issues.

"And I want my students to be able to express their questions and doubts in class and in writing so that we can engage in a real conversation with them," Lynch said.

The firings angered several dozen Regis Jesuit students, who staged a walkout Jan. 14. Alumni who had written for the publication warned of a chilling effect as the school appeared to clamp down on open and free debate in student media. Observers say the episode is also the latest example in a long history of student journalists clashing with school administrators.

"I think it's an incredible overreaction to kill the publication and remove it," said Al Tompkins, a senior faculty member at the Poynter Institute for Media Studies, a nonprofit journalism school and research organization in St. Petersburg, Florida.

A "student free expression law" provides relatively strong protections for student journalists in Colorado public schools from having administrators censor or remove their content. But Tompkins told NCR that the state law does not apply to private schools.

"That's part of what comes with publishing inside the auspices of a private institution like a church, you don't have the same free expression rights that you would if you weren't under that," said Tompkins, who added that Regis Jesuit is on solid legal, if not editorial, footing.

Said Tompkins: "I mean, is it good journalism? No. Do I think it's good practice? No. But can they do it? Yeah, they can do it."

'This situation seems to be a product of the larger society that can't imagine that a pro-life teacher would allow, via editorial policies, a student to publish a pro-choice article.'
—Maria Lynch

Asked about the school's decision to fire Lynch and Arduini, Charisse Broderick King, a spokeswoman for Regis Jesuit High School, told NCR that there were "contextual pieces" the school cannot share in personnel issues.

In addition to retracting the publication, King said Regis Jesuit informed families and "reiterated" the school's "belief about the sanctity of life beginning at the moment of conception." She said Regis Jesuit is also looking to revise the student journalism program's editorial policies.

"While we believe in providing an avenue for student expression, we are taking steps now to consider the magazine's editorial process to ensure its compatibility with and responsibility in representing the mission of Regis Jesuit," King said.

NCR also asked King to confirm the authenticity of the emails sent between Lynch and the administration, but the spokesperson did not immediately respond to that request.

The email copies that Lynch provided to NCR included messages between Lynch and Tricco about how opinion essays were selected for publication in Elevate, and how Lynch was hoping a pro-life rebuttal to the pro-choice essay might be published in a subsequent issue.

Lynch also provided copies of a proposed separation agreement and an accompanying email that indicated the administration believed Lynch was being fired for cause.

Even before Regis Jesuit fired its advisers and began a process to overhaul its student editorial policies, the administration had already started putting increased oversight on its journalism program, said Maddie Proctor, an alum and Elevate's former editor-in-chief.

Proctor told NCR that the Regis Jesuit administration put the journalism program "under review" earlier this year after the Elevate staff disseminated a survey to the entire student body to gauge interest in a special LGBTQ issue of the magazine.

"There's been a culture shift there that I've noticed," said Proctor, who is a freshman at Harvard University, where she writes for The Harvard Independent, a weekly student newspaper. Proctor said her teachers at Regis Jesuit respected students' freedom to question and wrestle with difficult subjects.

"I had a much more open-minded experience at Regis, so this was a shocking turn for me," she said.

The Jesuit school took action after complaints were made to Archbishop Samuel Aquila of Denver, an outspoken prelate who has said that Catholic politicians like President Joe Biden should be denied Communion for supporting abortion rights. Aquila has also opposed vaccine mandates because some COVID vaccines were developed using stem cells derived initially from aborted fetal tissue. (Pope Francis has said receiving those vaccines is morally acceptable.)

In a two-page public letter dated Dec. 23 — the day after Lynch received her termination notice — Aquila wrote to the local Catholic community that he had been "deeply troubled" by the editorial. He said "many families" had reached out to him, and he thanked the school for retracting the essay and for having "addressed the situation."

Aquila also wrote that Regis Jesuit had "committed to disseminating and defending all Church teaching, most especially the Church's teaching on the sanctity of life." He added that he had offered his "team" to assist the school in "ensuring that deeply faithful Catholic education" would be taking place at Regis Jesuit.

Regis Jesuit retracted the publication, and posted a letter, dated Dec. 17, that said the school had failed to "provide proper guidance in how to consider matters" involving firmly-held beliefs, including the church's teaching against abortion.

Mark Haas, a spokesman for the Archdiocese of Denver, told NCR that the situation at Regis Jesuit and the subsequent personnel decisions were handled by the school's leadership team.

"As mentioned in Archbishop Aquila's letter, enough people reached out to him who were concerned about the situation that he felt compelled to respond, and also to offer the support and resources of the archdiocese where necessary," Haas said.

Lynch said she was stung by a comment in Aquila's letter that warned against Catholic educators with "personal political preferences or agendas."

"My first reaction was total sadness that the person entrusted with shepherding me had not even attempted to talk to me before he commended the school on their handling of the situation," said Lynch, who added that she emailed the chancery and Aquila's office on Jan. 11 to request a meeting with the archbishop to explain her reasoning and her devotion to the church.

"But I was told he is not able to meet at this time," said Lynch, who has not signed a legal confidential separation agreement that she said the school requested. According to a draft of the agreement that Lynch provided to NCR, the agreement would have precluded her from speaking about the situation in a manner that would be "disparaging" to Regis Jesuit.

"And I wanted to have the freedom to defend myself as a woman of faith, a pro-life advocate and a devoted teacher," she said. "My family and friends know so many women who have signed [non-disclosure agreements] with the Church and educational institutions and later regretted it."

Citing her "deep love" of the students and faculty at Regis Jesuit, Lynch — who had taught at the school since 2016 and has long considered Catholic education to be her vocation — said she prefers not to litigate.

"This isn't about money," she said. "It's about asking Regis and Archbishop Aquila to do the right thing. That means not just making moves to save face or avoid backlash but to engage in dialogue with students' questions without fear."

Said Lynch, "Our students have tough questions, need to have the freedom to express them, and deserve open, and frank discussions that can help them understand why the church teaches what she does."