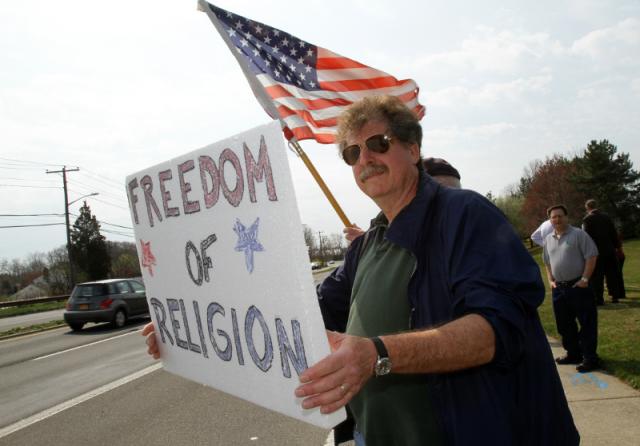 William Stysiack of Our Lady of Perpetual Help Parish in Lindenhurst, N.Y., participates in a "Stand Up for Religious Freedom" rally near the offices of U.S. Sens. Charles Schumer and Kirsten Gillibrand in Melville, N.Y., March 23. (CNS/Long Island Catholic/Gregory A. Shemitz)

WASHINGTON -- Forty-three Catholic dioceses, schools, hospitals, social service agencies and other institutions filed suit in federal court Monday to stop three government agencies from implementing a mandate that would require them to cover contraceptives and sterilization in their health plans.

"Through this lawsuit, plaintiffs do not seek to impose their religious beliefs on others," said one of the suits, filed in U.S. District Court for the Northern District of Indiana by the Diocese of Fort Wayne-South Bend, diocesan Catholic Charities, St. Anne Home and Retirement Community, Franciscan Alliance, University of St. Francis and Our Sunday Visitor.

"They simply ask that the government not impose its values and policies on plaintiffs, in direct violation of their religious beliefs," it added.

Cardinal Timothy M. Dolan of New York, whose archdiocese is among the plaintiffs, said the lawsuits were "a compelling display of the unity of the church in defense of religious liberty" and "a great show of the diversity of the church's ministries that serve the common good and that are jeopardized by the mandate."

"We have tried negotiations with the administration and legislation with the Congress -- and we'll keep at it -- but there's still no fix," the cardinal said. "Time is running out and our valuable ministries and fundamental rights hang in the balance, so we have to resort to the courts now."

Dolan also is president of the U.S. Conference of Catholic Bishops, which is not a party to the lawsuits.

Catholic organizations have objected to the contraceptive mandate since it was announced Aug. 1 by Kathleen Sebelius, secretary of the U.S. Department of Health and Human Services. Unless they are subject to a narrow religious exemption or have a grandfathered health plan, employers will be required to pay for sterilizations and contraceptives, including some abortion-inducing drugs, as part of their health coverage beginning as soon as Aug. 1, 2012.

In all, 12 lawsuits were filed simultaneously Monday in various U.S. district courts around the country. The defendants in each case were Sebelius, Labor Secretary Hilda Solis and Treasury Secretary Timothy Geithner, along with their departments.

In addition to the Archdiocese of New York and Diocese of Fort Wayne-South Bend, the dioceses involved are the archdioceses of Washington and St. Louis and the dioceses of Rockville Centre, N.Y.; Erie, Pa.; Pittsburgh; Dallas; Fort Worth, Texas; Jackson, Miss.; Biloxi, Miss.; Springfield, Ill.; and Joliet, Ill. The Michigan Catholic Conference, which provides medical benefits to more than 1,100 Catholic institutions and approximately 10,000 employees in the state, also is a plaintiff.

"We need to go to the court and say we are a church institution, we are a provider of health care and, according to the U.S. Constitution, the laws must protect our religious freedom," said Detroit Archbishop Allen H. Vigneron. "We have a very particular case to make."

Holy Cross Fr. John I. Jenkins, president of Notre Dame, said the decision to file the lawsuit "came after much deliberation, discussion and efforts to find a solution acceptable to the various parties."

"This filing is about the freedom of a religious organization to live its mission, and its significance goes well beyond any debate about contraceptives," he said. "For if we concede that the government can decide which religious organizations are sufficiently religious to be awarded the freedom to follow the principles that define their mission, then we have begun to walk down a path that ultimately leads to the undermining of those institutions."

Others filing suit include a Catholic cemeteries association, an agency that serves the deaf, health care and social-services organizations, and Catholic elementary and secondary schools.

Our Sunday Visitor, a national Catholic newspaper based in Huntington, Ind., said in an editorial that it "stands proudly with our fellow Catholic apostolates and with our bishops in resisting this challenge."

The newspaper asked readers "to stand with us -- in charity, praying first and foremost for conversions of heart; in civility, arguing the facts of this case without recourse to bitter partisanship or political rhetoric; and in solidarity, knowing that whatever sacrifices we bear and whatever challenges we endure, we are only doing what is our responsibility as American citizens practicing our faith in the public square."

Each of the lawsuits uses similar wording to make its case and each asks for a jury trial.

Noting that the Founding Fathers agreed "that the mixture of government and religion is destructive to both institutions and divisive to the social fabric upon which the country depends," the lawsuits contend that the U.S. Constitution and federal law "stand as bulwarks against oppressive government actions even if supported by a majority of citizens."

"Despite repeated requests from church leaders, the government has insisted that it will not change the core principle of the U.S. government mandate -- that plaintiffs must subsidize and/or facilitate providing their employees free access to drugs and services that are contrary to plaintiffs' religious beliefs," the suits state. "If the government can force religious institutions to violate their beliefs in such a manner, there is no apparent limit to the government's power."

The suits were filed by Jones Day, an international law firm with more than 2,400 attorneys on five continents.

Jones Day said in a statement that the firm "looks forward to presenting its clients' cases in court."

The contraceptive mandate "unconstitutionally authorizes the federal government to determine which organizations are sufficiently 'religious' to warrant an exemption from the requirement," the statement says. "This regulation is in violation of the religious liberties guaranteed by the First Amendment, the Religious Freedom Restoration Act and other federal laws."

Here, listed by the federal jurisdiction in which they were filed, are the plaintiffs in the 12 lawsuits filed Monday against the Department of Health and Human Services' mandate that most health plans must cover sterilizations and contraceptives, including some abortion-inducing drugs.

-- The Catholic University of America, Washington

-- Diocese of Fort Worth

In addition, other Catholic entities have filed separate lawsuits against the mandate. These include Belmont Abbey College in North Carolina (November 2011), Eternal Word Television Network in Birmingham, Ala. (Feb. 9), Priests for Life in Staten Island, N.Y. (Feb. 15), Ave Maria University in Florida (Feb. 21) and the Florida-based group Legatus (May 8).