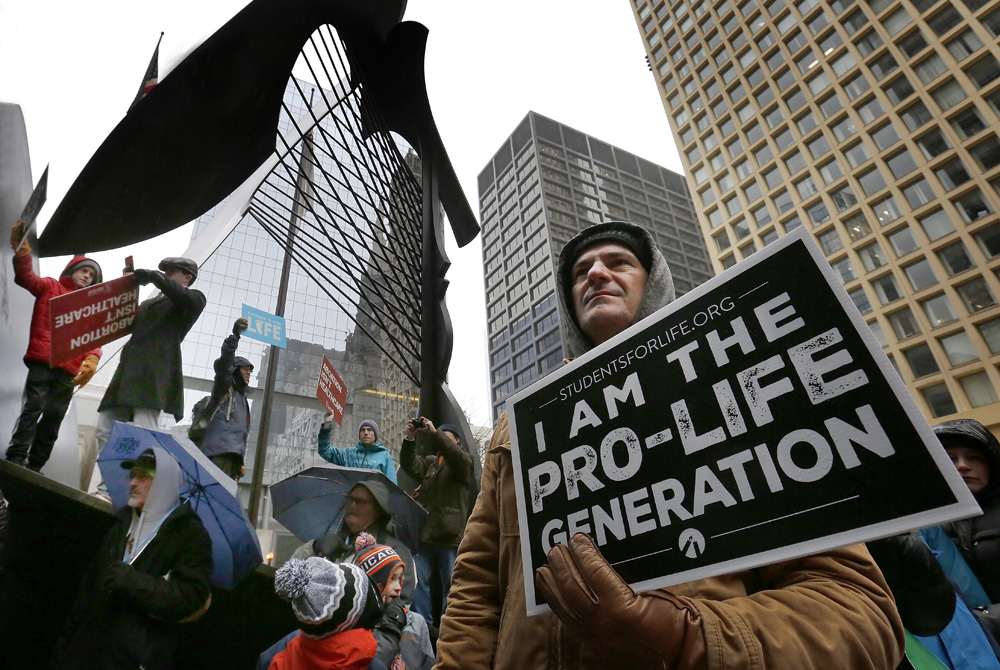 If you ask Melissa Cedillo for her views on abortion, you're not likely to find a straightforward response.

A convert to Catholicism at 18 who is now studying at Harvard Divinity School, Cedillo, 24, doesn't place herself in either of the two camps that dominate the national debate on abortion — one framed mostly in legal terms, and in her view, lacks complexity, and politically speaking, "often gets stuck into two binaries and mostly in the mouths of men."

"I see abortion as a deeply intimate topic that has been made abundantly public," she told NCR.

To Cedillo, focusing on abortion through a legal lens leaves out discussion of root causes, like the costs of child care, health care, the accessibility of affordable housing and social programs, that can lead women to consider the procedure at all.

A graduate of both Xavier College Prep in southern California and Loyola Marymount University, she admits her stance on abortion has fluctuated.

"It's a messy topic with a variety of opinions depending who you’re talking to," she said in an email.

"They are not afraid of something they don't see as a black-and-white issue."
—Maureen Day

"Messy" is a word that regularly rises to the top when talking about abortion, said Maureen Day, an assistant professor of religion and society at the Franciscan School of Theology at the University of San Diego. In the past year, she has worked on two studies that have explored Catholic views on abortion, one commissioned by the University of Notre Dame that conducted long-form interviews with more than 200 people. From that research, she's noticed that millennials are willing to enter "the murkiness and the mess" that often comes with discussions on abortion.

"They are not afraid of something they don't see as a black-and-white issue," Day said.*

As with the national conversation, polling on abortion tends to look at its legality.

For the most part, those views reflected Americans overall, with 54% believing abortion should be legal in all or most cases, compared to 40% favoring its outlawing. Those findings are consistent with Gallup polling, which places national abortion support at 53%. A Pew Research Center survey conducted in the summer showed about the same opposition (38%) with slightly higher support (61%).

Support for legal abortion increases when factoring in Generation Z (ages 18-24). The PRRI survey found the 18-29 age group more supportive of keeping abortion legal (59%) than any other age group, with support falling as ages increased. The Pew survey showed that same age group's support even higher: 70% favoring legal abortion — an increase of roughly 15 percentage points above Americans 50 and older — versus 29% opposed.

What about young Catholics?

According to the PRRI study, Catholic millennials are nearly evenly split, with 46% saying abortion should be legal versus 48% who support making it illegal, which flips the percentages of Catholics overall (48% support legality vs. 46% opposing). 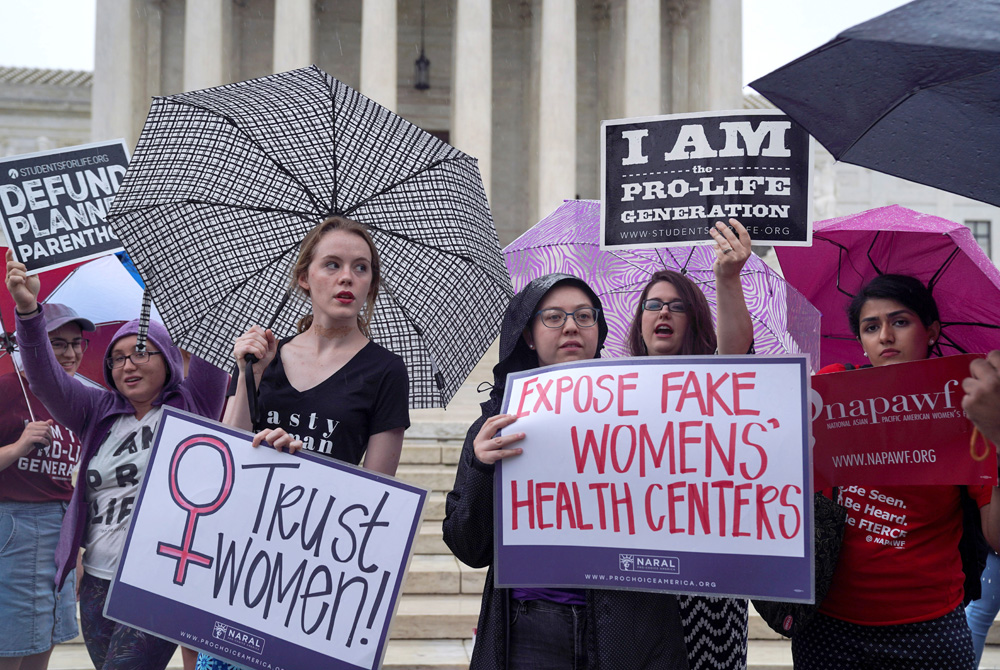 A woman who supports the right to an abortion stands alongside pro-life supporters during a June 22, 2018, rally outside the U.S. Supreme Court in Washington. (CNS/Toya Sarno Jordan, Reuters)

The PRRI study attributes higher support for legal abortion among Gen Z to higher proportions of Hispanics born in the U.S. Jackson said recent survey trends have shown the Hispanic population as more conservative than other groups on abortion views.

That was the experience for Ariana Taylor, a 21-year-old student at Arizona Western College living in Yuma, Arizona.

Raised Catholic, she describes her family as "all pro-life. They're all against abortion."

Like in the PRRI survey, the 2017 survey of American Catholics, the sixth in a series of studies since 1987 led by sociologist William D'Antonio, conducted every six years, also found a difference in abortion views between Hispanic and non-Hispanic Catholics millennials on whether they believed a person could be a good Catholic without obeying the institutional church's opposition to abortion (60% vs. 71%).

"We see more and more Hispanics having a Hispanic-American experience, growing up in the American school system and that sort of thing. And that is closing the gap," Day said. She added it's not only Hispanic Catholics who are changing their views, as both sides are moving toward the center of opinions.

Views on being a good Catholic

The Catholics in America study was last conducted in 2017. On its two abortion-related questions, it found millennials mostly in agreement with the Vatican II (born 1941-1960) and post-Vatican II generations (born 1961-1978).

About two-thirds of each affirmed a person can be a good Catholic without sticking to church teaching on abortion, compared to less than half the pre-Vatican II generation (born 1940 and earlier). Likewise, more than half of each of the latter three generations believed the final say on right or wrong when considering an abortion resided with the individual, rather than church leaders.

Kate Ott, a Christian ethicist at Drew University who studies sexuality and reproductive health, said that Catholic millennials' abortion views are a continuation of a trend.

"As religiosity decreases and as education and economic opportunities open, we often see individuals become more supportive of abortion legality in all or most cases," she said.

Similarities across the generations also emerged in 50 face-to-face interviews that Day conducted in Southern California as part of a nationwide look at abortion views. In all, the national abortion attitudes study spoke with more than 200 people, with each session lasting from an hour to 90 minutes. The forthcoming study is funded by Notre Dame's McGrath Institute for Church Life.

Day said what consistently emerged in her interviews, along with an additional 40 she reviewed, among Catholics of all ages was "this visceral reaction against taking abortion lightly." In the conversations, interviewees worked through their legal and moral stances on abortion in real time, even as many didn't arrive with them separately defined.

A leading factor in abortion views was personal experience, something older generations had over many young Catholics interviewed, who discussed abortion in more abstract terms. Day said that can in part be attributed to the national decline in abortions, which in recent years have dropped to the lowest rate since 1973, the year the Supreme Court legalized it.

For Taylor, the Gen Z Catholic in Arizona, her anti-abortion stance only strengthened during her freshman year at college as she and others counseled a friend who considered an abortion after she became pregnant following a sexual assault.

While she had thought about what she might do if in the same situation, "it never was something that was true until that moment," she told NCR.

Taylor recalled how each of the friends shared their feelings, with some favoring abortion. They argued their friend was not irresponsible and the assault wasn't her fault, that she wasn't ready to raise and support a baby, and why should she have to live with a daily reminder of a horrible moment in her life? When she spoke, Taylor acknowledged she could never understand her friend's situation or her trauma, and said she hoped if in a similar position she would keep the child or put it up for adoption. In the end, the friend talked with her family, who said they would support her, and decided to continue the pregnancy.

"But it was a really, really hard decision," Taylor said. 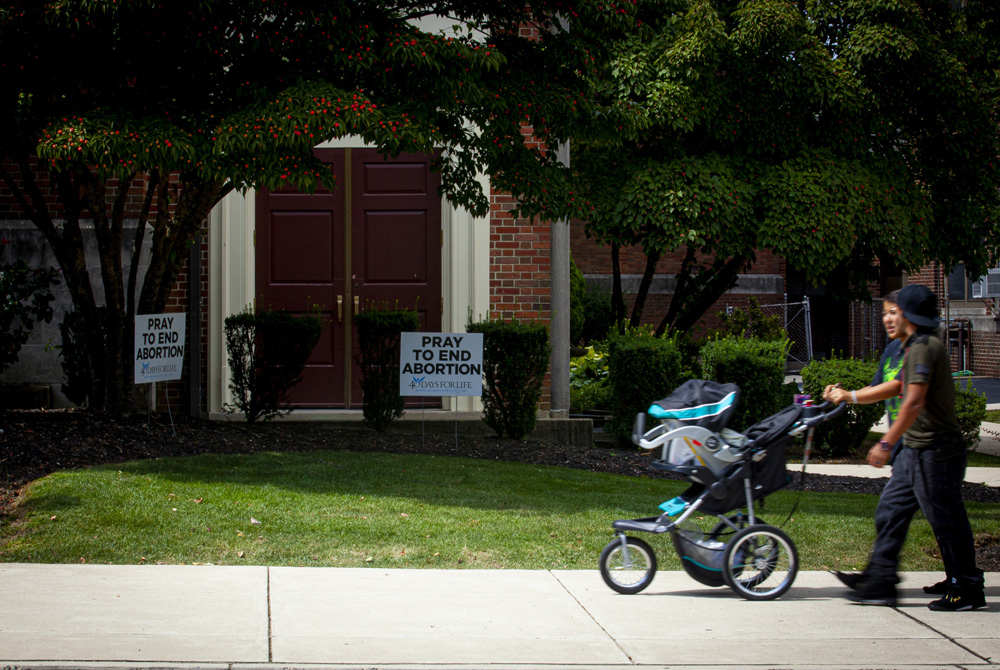 A couple pushes a baby carriage past the Cathedral Church of St. Catharine of Siena Aug. 30, 2019, in Allentown, Pennsylvania, where anti-abortion signs are displayed. (CNS photo/Chaz Muth)

Caitlin Wright admits it's difficult for her to pinpoint her views on abortion.

She is against restraining a woman's liberty or the control she has over her body. At the same time, the 25-year-old immigration counselor for Catholic Migration Services in New York doesn't believe in ending a life.

"I don't think that I stand fully in one camp or the other," she told NCR.

While at Creighton University, her views on what it means to be pro-life broadened beyond simply anti-abortion, as was her stance while in high school in Minnesota, to include concern for immigrants, the marginalized and social justice issues.

"For me being pro-life means being pro-people," she said.

As far as talking about abortion, Wright said it's often much easier to simply avoid those conversations, which tend to get "very heated very quickly."

Ed Nunez, 23, also expressed frustration with the state of the abortion debate.

"[It's] becoming a one-issue thing, where we're not looking at the other issues that are contributing to the fact that women have to make this choice for themselves," said the Creighton student completing a master's degree in ministry.

As with others, Nunez said focusing on the legal question — he supports keeping abortion legal — omits issues regarding sexual abuse and assault, economic justice and homelessness that factor into a woman's decision. He added as a male who won't have this experience, it's important to just listen, too.

Tyler, who asked not to use his full name, agrees that communication on abortion is lacking. The 25-year-old from Chicago considers himself pro-life — in part, thanks to "three very strong women in my life" — in that he believes in upholding the dignity of each person, which means, he said, feeding the hungry, sheltering the homeless and also opposing abortion.

He's attended the local March for Life in the past, where he said the conversation often views such issues as "almost like side pieces" or "secondary."

Tyler said that primarily focusing on abortion "sells the pro-life movement short" and makes it more polarizing. He said a more vocal embrace of a common phrase in the movement — don't just make abortion illegal, make it unthinkable — could help politicians and others recognize the importance of safety net programs and economic assistance in curbing abortions.

Wright said conversations on abortion happen less now than when she was in college, in part because her friends share similar viewpoints. She hopes it's an issue that isn't easy for a lot of 20-somethings like her to form an opinion on. And as a young Catholic woman, she's still sorting through it herself.

"I'm still trying my best to figure out how to talk about this," she said.

*This story has been updated to clarify a quote.

A version of this story appeared in the Feb 7-20, 2020 print issue under the headline: Learning to talk about abortion.