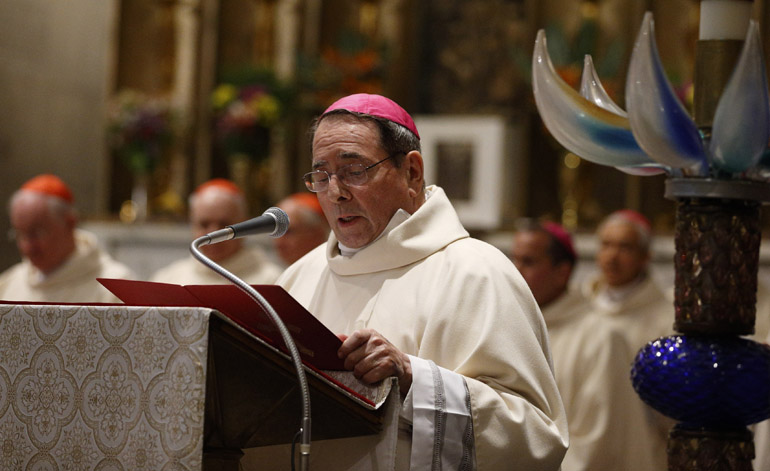 Archbishop John Myers of Newark, N.J., addresses Pope Francis at the conclusion of Mass May 2 at the Pontifical North American College in Rome. (CNS/Paul Haring)

In a test of Pope Francis’ pledge that bishops will be held accountable, an advocacy group for survivors of clergy sexual abuse has formally petitioned the Vatican to investigate Newark, N.J., Archbishop John Myers for possible abuse of his episcopal office.

If found complicit, the group is requesting that Myers be removed from his post and blocked from his controversial retirement home.

The Catholic Whistleblowers sent their case Tuesday to Archbishop Carlo Maria Viganò, apostolic nuncio to the U.S., with instructions to forward it to the Congregation of Bishops in Rome. The group alleges that since his appointment in 1987 as coadjutor to the Peoria, Ill., diocese, Myers has mishandled abuse allegations — including former Newark priest Michael Fugee — and has shown a pattern of harsh treatment toward victims and their advocates.

“Myers did everything to protect priests, and virtually nothing to protect the innocent, the kids, the victims,” said Robert Hoatson, a member of Catholic Whistleblowers and former priest of the Newark archdiocese whose 2003 co-founding of Road to Recovery put him at odds with Myers.

Following a press conference Wednesday, several of the petitioners of the case delivered a copy to the Newark chancery, where it was accepted on Myers’ behalf by communications director James Goodness. In an email, Goodness told NCR the archdiocese has not had a chance to completely review the document, and therefore it would be inappropriate to comment at this time.

Goodness added that since his arrival in Newark in 2001, Myers “has been very aggressive in pursuing allegations of sexual misconduct,” including reporting accusations to law enforcement and having the Archdiocesan Review Board investigate matters. “The fact that he has removed 19 priests from ministry since he has been Archbishop is clear evidence that he takes seriously any and all allegations of abuse,” he said.

The spokesman made similar points last month in a statement responding to media coverage of the assignment of Co-Adjutor Archbishop Bernard Hebda as apostolic administrator to the St. Paul-Minneapolis archdiocese following the resignation of Archbishop John Nienstedt.

Catholic Whistleblowers, a network of priests, religious and laypersons, brought the case forward in response to the June announcement that Pope Francis had approved a new accountability system for bishops that includes a tribunal to judge them “with regard to crimes of the abuse of office when connected to the abuse of minors.”

The accountability system — proposed by Boston Cardinal Sean O’Malley and the Pontifical Commission for the Protection of Minors he heads — included five points, the first stating “there is the duty to report all complaints” of episcopal abuse of office related to clergy sexual abuse to one of three Vatican congregations: for Bishops, for the Evangelization of Peoples and for Oriental Churches. Another point authorized the establishment of a tribunal housed in the Congregation for the Doctrine of the Faith to handle such cases.

“Myers is on the front burner as far as the Whistleblowers are concerned,” said Fr. James Connell, a retired Milwaukee priest and canon lawyer.

Catholic Whistleblowers have specifically requested that Francis remove Myers, 74, as archbishop and from the clerical state, deny him access to his retirement home that has undergone a half-million-dollar renovation, and assign him to a life of prayer and penance.

Their case against Myers centers on canons 1389 and 1399. Canon 1389 states that a person found to have abused ecclesiastical power or is culpably negligent "is to be punished with a just penalty," which includes removal from office. Canon 1399 adds that a violation of canonical law warrants a just penalty "only when the special gravity of the violation demands punishment and there is an urgent need to prevent or repair scandals."

Those same canons were cited in a petition Connell filed in February 2014 on behalf of Kansas City, Mo., Catholics seeking Vatican action against Bishop Robert Finn. It is not known what role, if any, that petition played in Finn’s April resignation.

As evidence to violations of those canons, the Whistleblowers petition pointed to instances where Myers allegedly did not respond properly to abuse accusations and with priests known to be abusive. They noted that following Myers’ 2001 departure from the Peoria diocese, his successor Bishop Daniel Jenky in his first two months removed eight priests from ministry due to allegations of sexually abusing minors.

In a letter addressed to Cardinal Marc Ouellet*, prefect of the Congregation for Bishops, Larry and Helen Rainforth said that they informed Myers of those priests, and that in the case of Msgr. Norman Goodman, the bishop “adamantly denied any wrong doing” and threatened slander and libel lawsuits against reporting persons. At the time of Goodman’s removal in 2002, the Chicago Tribune reported that Myers denied knowledge of the allegations, but a spokeswoman for the Peoria diocese said the first allegation came in 1993, three years after Myers became bishop.

In a separate letter, Dennis and Linda Bruns said Myers told them and other victims’ parents that he could do nothing to Goodman, and that they needed to catch the priest in the act — “with his hands in the cookie jar!” they recounted.

In Newark, Myers came under fire in 2013 for his handling of Fugee, the former priest found in violation of a 2007 agreement barring him from contact with minors by attending youth retreats and hearing confessions from children. In March 2014, Fugee left the priesthood as part of an agreement with country prosecutors to avoid criminal charges; he remains under supervision of the Bergen County prosecutor’s office. While critics said Myers failed in supervising Fugee, the archdiocese contended it never violated the terms of the priest’s memorandum of understanding and that it did not condone or authorize his interactions with children.

Sam Rivera, in a letter submitted as part of the Whistleblowers case, accused Myers of “not acting definitively and decisively” with his alleged abuser Msgr. John Laferrera of Livingston, N.J. Rivera, now 49, said that while allegations surfaced in 2009 against Laferrera, the priest remained at his parish until 2011 when several former altar boys filed a lawsuit against him. The suit was settled a year later.

Hoatson, himself an abuse survivor assisted Rivera and other alleged victims through Road to Recovery. In his own letter he said that Myers took action against him for his advocacy role. He alleged that in 2003 the archbishop removed him from his position as a school director following testimony he gave before the New York Legislature in which he called for the resignations of any bishop who covered up sexual abuse. Hoatson later sued the archdiocese for $5 million in 2006; at the time, archdiocesan officials said his removal was a result of management concerns and trouble with the school’s finance committee.

Hoatson was subsequently placed on administrative leave, and he applied for laicization in 2011, claiming Myers was squeezing him financially and ministerially. Hoatson has asked that in addition to Myers’ removal as archbishop, that he be reinstated to the priesthood so he can immediately “retire with dignity” and the financial support provided to priests.

“The actions of Archbishop Myers relative to my priesthood were nothing short of scandalous and an abuse of his office,” he said in his letter.

Recent months have seen four bishops resign their posts amid sexual abuse scandals in their dioceses. In addition to Finn, 62, Nienstedt, 68, and Auxiliary Bishop Lee Piché, 57, resigned from the St. Paul-Minneapolis archdiocese in June, as did Bishop Gonzalo Galvan Castillo, 64, of the Autlan diocese in Mexico.

In addition, a Brazilian bishop in July resigned following a $600,000 renovation of his home, a more modest remodeling than the one undertaken by Limburg, Germany Bishop Franz-Peter Tebartz-van Elst, 54, who resigned in March 2014 following a $40 million renovation of his home and diocesan offices. The case against Myers claims that the 3,000-square-foot addition on his retirement residence, at an estimated $500,000, adds to the scandal Myers has caused.

While prompted by the formation of the tribunal, Catholic Whistleblowers said they hope their case gains momentum from the recent spate of resignations.

“We’re not doing this because of those, but we’re encouraged by those. We think this may be part of the same pattern,” Connell said.

At first “less than cautiously optimistic” Francis would address the abuse issue, Hoatson said that the recent resignations, combined with the formation of the tribunal and the abuse commission consulting Dominican Fr. Tom Doyle, have begun to sway his opinion.

“[Francis] seems to be fulfilling some of the promises he has made,” he said.

The advocacy group noted it was also keenly aware that Myers, who turned 74 earlier this month, is a year away from the Vatican’s mandatory age for bishops to submit their resignation. In September 2013, the pope named Hebda co-adjutor archbishop of Newark, giving him automatic right of succession. While the Whistleblowers would prefer the pope act before Myers retires, they said such a step wouldn’t excuse the necessity of some type of discipline.

*An earlier version of this story misspelled Ouellet's name.