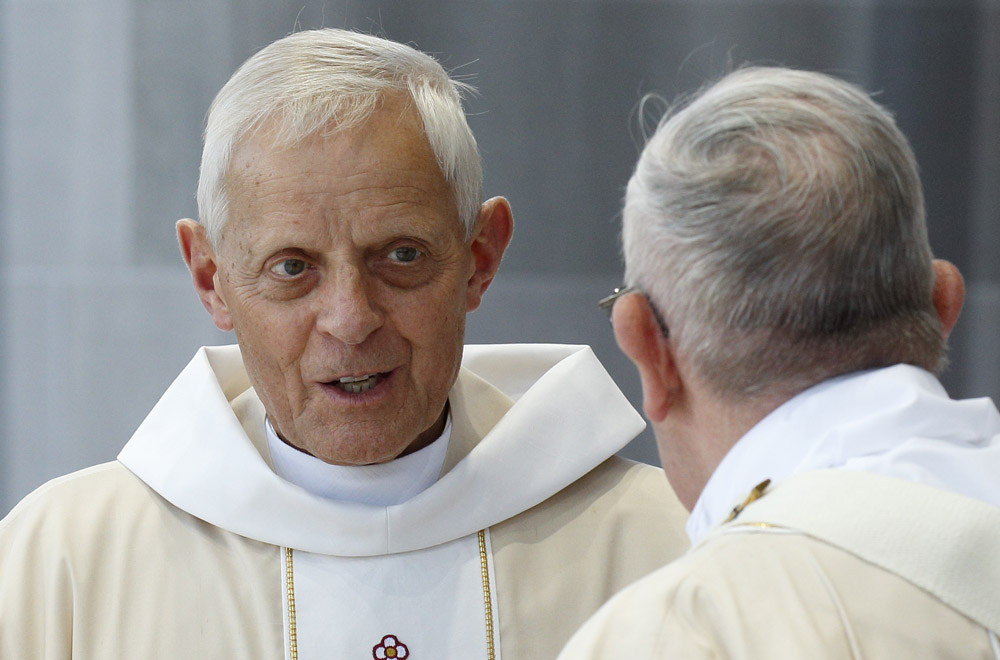 Cardinal Donald Wuerl of Washington prepares to exchange the sign of peace with Pope Francis as the pope celebrates Mass in Washington Sept. 23, 2015. (CNS/Paul Haring)

Although U.S. bishops' conference president Cardinal Daniel DiNardo did not detail the new process the prelates are considering for reporting allegations of misconduct by its member bishops in an Aug. 16 announcement, church law says there are a number of possible paths forward.

Several prominent canon lawyers say such a process, announced by DiNardo after a meeting of the bishops' executive committee about the revelations that now-former cardinal Theodore McCarrick sexually abused several young men over decades, could take various shapes.

The most prominent possibility is a national investigatory commission tasked with receiving and evaluating allegations, and then passing on its findings to the Vatican for final decision-making. But a second option is that the prelates could even ask the Vatican to grant the group authority to judge accused bishops on its own.

"I would see that as much more logical, that there would be a panel that could judge on behalf of the Holy See," said Oblate Fr. Francis Morrisey, a former president of the Canadian Canon Law Society who has advised numerous Vatican offices and local bishops' conferences.

Morrisey said the Vatican's Congregation for the Doctrine of the Faith has authorized diocesan tribunals in the U.S. and Canada on a case-by-case basis to handle proceedings normally reserved for its consideration.

"The Holy See has been delegating to bishops now to judge on its behalf," said the priest, a canon law professor at Saint Paul University in Ottawa. "We have a precedent there."

Washington Cardinal Donald Wuerl first proposed that the U.S. bishops create a new panel to evaluate allegations against its member bishops in an NCR interview Aug. 5, as part of a conversation focused on how the American church should address the wider systemic questions raised by the revelations about McCarrick.

In his Aug. 16 statement, DiNardo said the bishops "need to develop and widely promote reliable third-party reporting mechanisms" for allegations made against prelates.

Read this next: US bishops call for apostolic visitation into McCarrick abuse case

The cardinal, who heads the Galveston-Houston archdiocese, said the new process should involve "substantial involvement" of laypeople and "must be free from bias or undue influence by a bishop."

"Our structures must preclude bishops from deterring complaints against them, from hampering their investigation, or from skewing their resolution," said DiNardo, whose statement came two days after release of a wide-ranging grand jury report in Pennsylvania revealed that more than 300 priests were accused of committing sexual assault in six dioceses there.

McCarrick, who served as the archbishop of Washington from 2000-06, renounced his place in the College of Cardinals July 28 after reports of sexual misconduct with seminarians and 20 years of abuse of a boy that started when the child was 11 years old.

Canon lawyers said the U.S. bishops' conference will likely have to ask the Vatican for permission to pursue whatever course of action they choose to take with regard to reporting accusations against bishops, as church law limits the kind of actions that national conferences can take on their own authority.

Jesuit Fr. Robert Kaslyn, a professor and former dean of the Catholic University of America's School of Canon Law, said the bishops' conference would need first to discuss with the Vatican new possibilities such as establishing an investigatory body that did not make decisions about the allegations it receives.

"Given the current understanding of the conference and its role in the United States or in any other country, there is no ... space to envisage an investigatory body," said Kaslyn, adding: "The Holy See could amend the norms governing conferences and might be willing."

Nicholas Cafardi, a civil and canon lawyer and former dean of Duquesne University School of Law, agreed that the Vatican would have to formally implement the proposal.

"Whoever is going to oversee bishops has to be appointed by the Holy See," said Cafardi, an original member and chair of the conference's National Review Board, set up in 2002 to monitor the prelates' procedures to protect children. "Only the Holy See can discipline bishops."

Assuming the Vatican grants approval to the proposal, Cafardi said he thought the "ideal situation" would be for the panel to be made up of both bishops and laypeople, and tasked with investigating but not deciding on allegations.

"We do have disciplinary bodies already in the church," said Cafardi. "We have tribunals in the church already existing. We don't need to duplicate them."

Kaslyn and Morrisey agreed that the panel should include the presence of laypeople.

The Jesuit noted that qualified laypeople can now take part in canonical trials, as the norms concerning so-called "grave delicts" allow the Congregation for the Doctrine of the Faith to dispense from the requirement of priesthood.

"At least in theory there is nothing to prevent laypeople from being in or serving on such an investigatory body" as the proposed panel, said Kaslyn.

DiNardo said in his statement that a "more developed plan" for the new reporting process will be presented at the U.S. bishops' upcoming annual November meeting. The cardinal also said he would be traveling to Rome in coming weeks to discuss the matter with Vatican officials.

Whatever the U.S. bishops decide to do, Morrisey said: "Something has to be done."

"I don't think we can let the situation remain as it is," he continued. "The people just would not accept this, and rightly so."

"It's the vox fidelium, as it were, the voice of the faithful," said Morrisey. "They're going to expect some type of significant action."