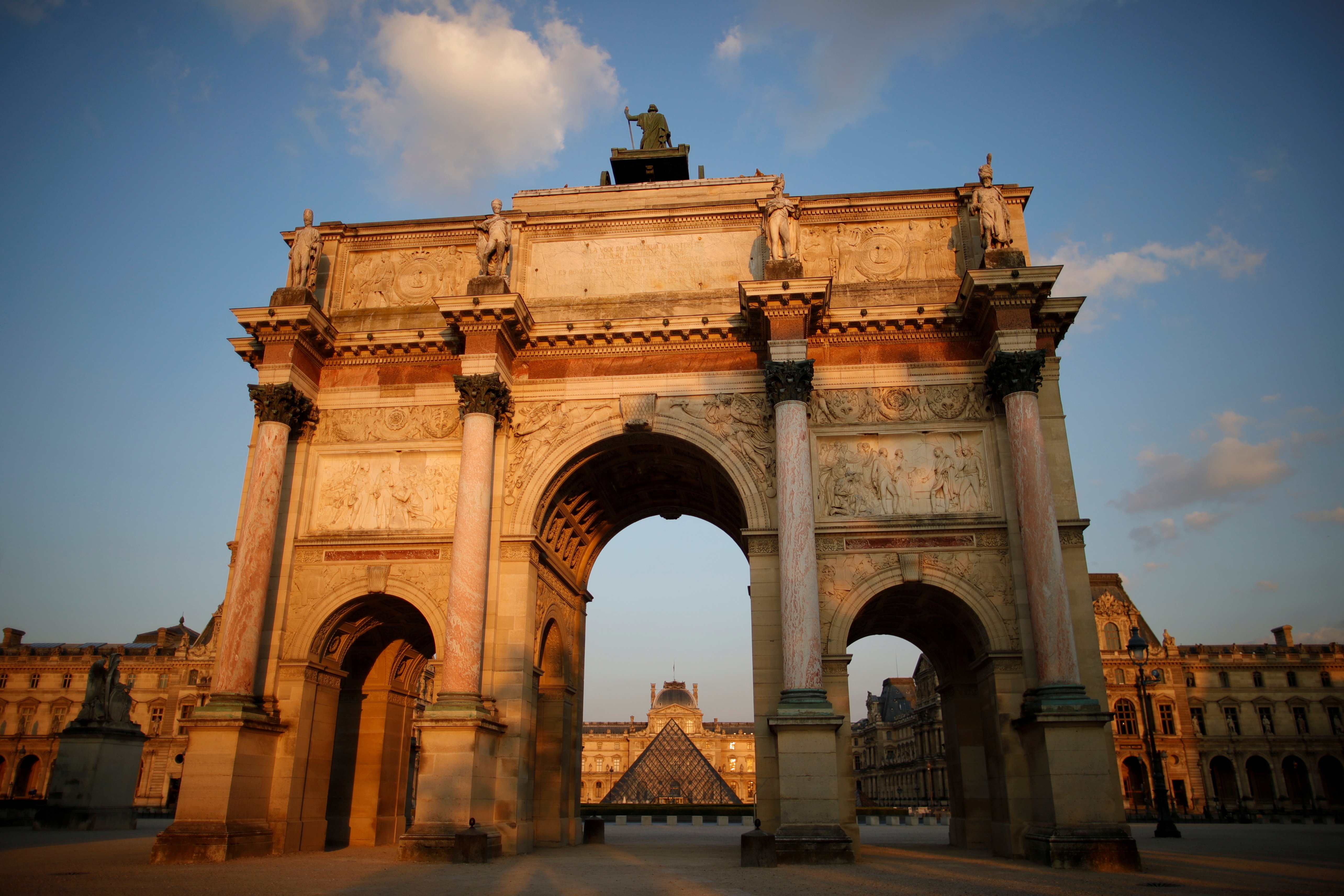 The sun illuminates Paris' famed Arc de Triomphe April 19, 2021. Bishop Nunzio Galantino, president of the Administration of the Patrimony of the Holy See, said the Vatican's purchase of a property near the Arc in 2017 was made "to increase income for the Holy See and simultaneously to provide resources to invest in the construction of a church" as well as a Catholic school in a poor Parisian neighborhood. (CNS photo/Sarah Meyssonnier, Reuters)

On the eve of a trial for financial malfeasance connected to the Vatican's purchase of a property in London, the office that handles most of the Vatican's investment portfolio, including real estate, made public a summary of its annual budget for the first time.

The Administration of the Patrimony of the Holy See, known by its Italian initials APSA, released its budget synthesis July 24, and its president, Bishop Nunzio Galantino, described it as "a step forward in the direction of transparency and sharing."

APSA directly administers 4,051 properties in Italy and entrusts to outside companies the administration of some 1,200 properties in London, Paris, Geneva and Lausanne, Switzerland, the report said.

However, the office was not involved in the London property deal that led to the indictment of 10 individuals, including Cardinal Angelo Becciu, former prefect of the Congregation for Saints' Causes, on charges ranging from embezzlement to money laundering and abuse of office.

The trial, which was set to begin July 27, revolves around a Vatican investigation into how the Secretariat of State used $200 million to finance a property development project in London's posh Chelsea district and incurred millions of dollars in debt.

According to the indictment, the failed property deal "generated substantial losses for the Vatican finances, also drawing from resources destined for the personal charitable works of the Holy Father," specifically through funds from the Peter's Pence collection.

Near the end of the investigation, Pope Francis ordered the Secretariat of State to shift control of its financial assets to APSA.

"The Secretariat of State, which most closely and directly supports the action of the supreme pontiff in his mission and represents an essential point of reference for the activities of the Roman Curia, should not perform those functions in economic and financial matters already attributed by competence to other dicasteries," the pope wrote in December.

The APSA budget synthesis highlighted the challenges posed by the COVID-19 pandemic. During the 2020 fiscal year, APSA reported a profit of almost 22 million euros ($25.8 million), a significant drop from the profit of 73.21 million euros ($86.3 million) in 2019.

Bishop Galantino, who was tapped by the pope in 2018 to head the office, told Vatican News that despite heavy losses due to lockdowns throughout the year, "prompt and concrete attention" was given to people and, especially, commercial businesses, who occupy buildings owned or managed by APSA.

"We have given them the possibility, in documented cases, to benefit from a reduction in the rent and to defer part of the rent itself," he said.

While reducing or deferring rent payments contributed to the loss of income for the year, the Italian bishop said the decision remained "a positive result in the sense that it has brought out the will to be and continue to be and behave 'as a church,' even in a moment of serious crisis for everyone."

APSA's budget summary also offered a glimpse into the Vatican's investments and real estate holdings, which often have been shrouded in mystery and subject to much speculation.

"I harbor a secret hope: I hope that the publication and reading of the numbers and the important notes that accompany them will foster more correct and complete information," Bishop Galantino said.

More importantly, it shed light on how income received from properties are used or allocated.

For example, the budget summary stated that market-rate rent collected from "prestigious properties" in Paris and London allowed APSA to offer the papal almoner's office rent-free use of Palazzo Migliori, a four-story building located a stone's throw away from St. Peter's Basilica.

Once the residence of members of the Roman nobility, the 19th-century edifice was transformed into a shelter, day center and soup kitchen for the poor managed by the Community of Sant'Edigio, a Rome-based lay movement that already runs soup kitchens and a variety of programs for the city's poor.

Additionally, Bishop Galantino told Vatican News that the Vatican's purchase of a property near Paris' famed Arc de Triomphe in 2017 for an estimated 14.4 million euros was made "to increase income for the Holy See and simultaneously to provide resources to invest in the construction of a church" as well as a Catholic school in a poor Parisian neighborhood.

However, not all Vatican-owned properties are sprawling buildings in swanky neighborhoods.

The APSA holdings include farmland that produces almost exclusively grain and wheat, which are used to feed the animals at the papal farm in Castel Gandolfo, the bishop said.

APSA, he said, will complete a census of its land assets by the end of summer 2021, followed by an analysis and strategy proposals "to improve their relative income performance."

Nevertheless, for Bishop Galantino, the release of the budget, as well as continuing financial reforms, are about more than setting the Vatican's financial affairs in order; above all, he said, the purpose is to "promote a new culture" of fiscal responsibility.

"This demands the definition of new procedures that ensure increasingly correct and transparent models of management (that are) easily traceable and open to any oversight," he said. "We are still working on this. But we are well on our way."