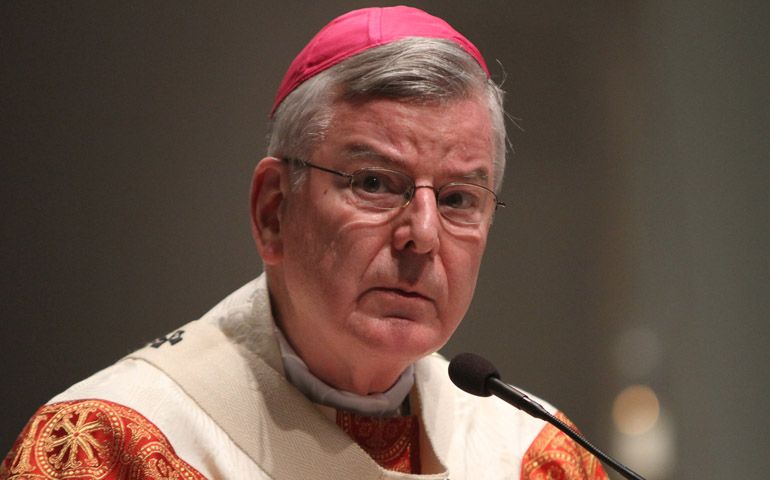 Archbishop John Nienstedt is pictured in a May 12, 2015 photo. (CNS/Dave Hrbacek, The Catholic Spirit)

Two U.S. bishops who prematurely resigned their posts amid clergy sexual abuse scandals each have found new landing spots outside their previous dioceses.

A southern Michigan parish announced over the weekend that Archbishop John Nienstedt, formerly head of the St. Paul-Minneapolis archdiocese, will help out temporarily in the coming months, while Bishop Robert Finn, former head of the Kansas City-St. Joseph, Mo. diocese, began last month as chaplain for a Nebraska community of women religious.

Within the span of two months last spring, Finn, 62, and Nienstedt, 68, stepped down -- years before the traditional age of 75 when bishops must submit their resignations to Rome -- as shepherds of their respective dioceses, both of which teemed with anger and anguish for their church's handling of child sexual abuse allegations. In the case of Finn, it was a 2012 misdemeanor conviction for failing to report suspected child abuse that drew a probationary sentence in civil court but no recourse from the church. For Nienstedt, his abdication, along with Auxiliary Bishop Lee Piché, came just 10 days after the Ramsey County prosecutor brought criminal charges against the archdiocese for its handling of abuse allegations.

Both Finn and Nienstedt now have new homes.

Nienstedt has agreed to assist in pastoral ministries at St. Philip Roman Catholic Church in Battle Creek, Mich., in the Kalamazoo diocese, or about two hours west of his hometown Detroit archdiocese. He took up residence in Battle Creek on Jan. 6.

The St. Paul-Minneapolis archdiocese said it would not comment on Nienstedt's move and directed questions to the Kalamazoo diocese. Victoria Cessna, executive director of the Kalamazoo secretariat of communications and public affairs, told NCR that Nienstedt is a retired priest offering his assistance to a friend, and was not appointed or assigned to the parish.

The Kalamazoo diocese in a statement said Nienstedt is welcome in the diocese, while reiterating its commitment "to providing safe environments for all people."

"As is the case for any priest or bishop ministering in the Diocese, Archbishop Emeritus Nienstedt begins his temporary ministry at St. Philip Parish as a priest in good standing, having met the Church's stringent standards required to attain that status," it said.

It remains unclear, though, if the Kalamazoo diocese was made aware of, or given access to, the investigation to alleged sexual improprieties by Nienstedt with seminarians and other adults, which extended to his time in Michigan in the early 1980s. Two years ago, Nienstedt himself commissioned the St. Paul law firm Greene Espel to look into the charges against him. Last July, Nienstedt again denied the allegations to the Minneapolis Star Tribune, calling them "entirely false and based wholly on rumor, hearsay, or innuendo." At the time, the Star Tribune reported that the archdiocese was considering making the investigation's report public. The archdiocese declined comment to NCR Tuesday on the status of the investigation.

David Clohessy, director of the Survivors Network of those Abused by Priests, objected to Nienstedt's move and urged people in Kalamazoo to educate themselves on the abuse crisis in Minnesota.

"This decision shows that Catholic officials still put the wishes and needs of their brother bishops ahead of nearly every other consideration, including the safety of the flock," he said in a statement.

"The diocese, after checking with others in higher positions of ecclesiastical authority, was given assurances that there was nothing standing in the way of Archbishop Nienstedt being considered a priest in good standing and helping out a brother priest who is ill in providing pastoral care to people proper to a priest," Cessna told NCR.

In the Jan. 10 parish bulletin, St. Philip pastor Fr. John Fleckenstein said that the archbishop will join the parish for about six months, while also describing health issues that have necessitated assistance at the parish. While Fleckenstein has led the parish on his own since the summer, he anticipated his health, and role as Episcopal Vicar for Education, would require additional help in coming months.

The St. Philip pastor said that Nienstedt, his friend of 20 years, will celebrate some weekend and weekday Masses at the church and at a local nursing home and assisted living facility, and will visit the sick and homebound. Nienstedt will maintain an office at the parish but reside at the St. Clare House at St. Joseph Catholic Church in Kalamazoo.

"While the Archbishop is not 'assigned' to the parish, I'm grateful he will assist us in these next few months," said Fleckenstein, who added that Nienstedt "anticipates moving on to a new ministry" at some point in the summer.

As Nienstedt found a new home, his old one moved closer to sale. As part of its ongoing bankruptcy proceedings, the Twin Cities archdiocese asked a bankruptcy court judge last week to approve a $2.75 million sale of its chancery building and archbishop's residence to commercial developer United Properties. The deal isn't expected to finalize until mid-March.

As for Finn, in December he began as chaplain of the School Sisters of Christ the King in the Lincoln, Neb., diocese, appointed to the position by Lincoln Bishop James Conley. Both his former and current dioceses announced the new role in their diocesan newspapers. Finn will reside at the School Sisters' Villa Regina Motherhouse.

In a story published Friday morning, Conley told the Lincoln Journal Star that Finn has been well received in the diocese, and that in the Year of Mercy declared by Pope Francis, Finn deserves mercy, as well. According to JD Flynn, Lincoln diocesan spokesman, Finn had to pass a background check and complete child protection training before beginning his chaplaincy. In addition, Conley consulted with several ecclesiastical officials before making the appointment.

"Of course, Bishop Finn has faced legal issues related to administrative decisions, he’s addressed them appropriately, and they’ve been resolved. The faithful of our diocese can be confident that his ministry as a chaplain to the School Sisters of Christ will be a grace for all of us, and a witness to God’s enduring mercy," Conley told the newspaper.

Flynn added that Finn made an administrative mistake -- one he has since paid for -- in not immediately reporting former priest Shawn Ratigan to police for possession of child pornography, and questioned those who continue to harp on the bishop's past.

“It doesn’t strike me as particularly Christian to search out a person who made a mistake and continue to hound him about it,” Flynn told the Journal Star.

While rumors have floated in Kansas City that Finn might also teach at the St. Gregory the Great Seminary, in Seward, Neb., attended by several Kansas City seminarians, its rector, Fr. Jeffrey Eickhoff, told NCR that the bishop is currently not teaching, and at this point nothing further has been determined.

Editor's Note: Clarifying information was added to this story regarding the normal path bishops take in resigning.