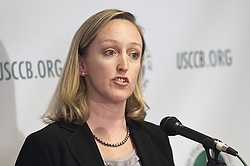 Karen Terry, principal investigator for the John Jay College report on the causes and context of clergy sexual abuse, speaks during a press conference at the headquarters of the U.S. Conference of Catholic Bishops in Washington May 18. (CNS photo)

In the last few days I have carefully read the entire 143-page John Jay report on the causes of clergy sex abuse in the United States and have again reviewed the executive summaries and conclusions of 17 of the 27 reports on clergy sexual abuse that have been published between 1989 and 2011.

Most of these are from official sources such as the U.S. grand juries, the three Irish reports (Ferns, Ryan, Murphy) or the two Canadian reports that resulted from the Mt. Cashel debacle of the eighties. Others are from Church sources such as the National Review Board Report of 2004, The Bernardin Report of 1992 or Church sponsored reports such as the Defenbaugh Report (Chicago, 2006) or the first John Jay Report from 2004. Most of the reports contained a section on causality. None of the reports said anything about the effect of the culture of the sixties or seventies as a factor of causality but every one of them pointed to the various kinds and levels of failure by the bishops as the essential cause of the phenomenon of sexual abuse of children and minors by clerics.

Some of the reports went into more detail about socio-cultural factors that had a causal effect but none of these factors included somehow shifting the blame to the “increased deviance of society during that time” as Karen Terry said in her statement released with the report. There was unanimity about the effect of culture, but it was not the culture outside the church but the culture within. Arthur Jones hit the nail squarely on the head in his NCR column on May 18 when he named arrogant clericalism as the culture that in many ways created the offending clerics and allowed the abuse to flourish.

There is a third source of information that perhaps provides the most accurate data on clergy sexual abuse in our era and that is the data obtained by victims’ attorneys in the six thousand plus civil and criminal cases from the U.S. alone. Add to this the information from similar cases in Canada, Ireland, Australia, the U.K. and several other European countries and you have a picture that is much different than that proposed in this latest John Jay report. The report refers to the sixties and seventies as the peak period with cases dwindling off after that period. This apparently fits in with what some of the cynics have called the “Woodstock Defense.”

The time lag in reporting is not to be explained by sociological data and its interpretation but by the emotional and
psychological impact of sexual violation on a young victim. Most take a decade or more to find the security and courage to come forward. The victim support groups and plaintiffs’ attorneys here and abroad are seeing a significant increase in victims who were violated in the fifties and even the forties. As one of my astute friends remarked, these are the victims from the Big Band era so what does that constitute, the “Benny Goodman” defense?

Those who see the main conclusions from the Executive Summary as support for the bishops’ blame-shifting tactics are probably right. Yet these conclusions are only a part of the whole story and in some ways they are of minor relevance. The finding that the majority of cases occurred in the 1960s and 1970s can be quickly challenged. It is more accurate to say that the majority of cases reported in the post 2002 period involved abuse that took place in the period from the sixties to the eighties. Its way off base to assume that the majority of incidents of abuse happened during this period. Fr. Gerald Fitzgerald founded the Paraclete community in 1947 to provide help to priests with problems. From the beginning he was treating priests with psycho-sexual issues and in a letter to a bishop he said that 3 out of every 10 priests admitted were there because they had sexually molested minors.

Fr. Gerald wrote that letter in 1964. Unfortunately it is difficult if not impossible to do a study of abuse victims between the 30’s and the 50’s but Fr. Gerald’s information leaves no doubt that sexual abuse by priests was a significant phenomenon long before the free-wheeling 60’s and 70’s. The one constant that was present throughout the entire period from before the 60’s to the turn of the millennium has been the cover-up by the bishops and the disgraceful treatment of victims. The John Jay researchers were commissioned by the bishops to look into the reasons why priests molested and violated minors. They were not asked to figure out why this molestation and violation was allowed to happen. That would have been deadly for the bishops and they knew it.

Nevertheless the researchers could not avoid the blatant role played by the hierarchy. In this regard the report should not be written off as largely either irrelevant or enabling of the bishops’ never-ending campaign to avoid facing their responsibility square on. That’s why it’s important to read the whole report and not depend on the Executive Summary or Karen Terry’s statement or the statements of any of the bishops or church sponsored media outlets. Well into the body there is recognition of the real issues that have caused the anger and are the basis for the thousands of lawsuits and official reports. The section entitled “Mid-1990’s Diocesan Response” on pages 86-91contains a sobering antidote to the soft-peddling about priests who lost their way in the Woodstock Era. To their credit the research team included information critical of the bishops’ responses on several levels. A few quotes:

The failure of some diocesan leaders to take responsibility for the harms of the abuse by priests was egregious in some cases. (p. 89)

Parishioners were not told, or were misled about the reason for the abuser’s transfer (p. 89)

Diocesan leaders rarely provided information to local civil authorities and sometimes made concerted efforts to prevent reports of sexual abuse by priests from reaching law enforcement even before the statute of limitations expired. (p. 89)
Diocesan officials tried to keep their files devoid of incriminating evidencet. (p. 89)

Diocesan leaders attempted to deflect personal liability for retaining abusers by relying on therapists’ recommendations or employing legalistic arguments about the status of priests. (p. 89)

Dioceses, the interviewee reported, would intimidate priests who brought charges against other priests; he reported that the law firm hired by the diocese wiretapped his phone and went through his trash. (p. 90).

The interviewee was a priest-victim who had come forward in 1991.

These citations do not represent exceptions. This was the operating procedure that was standard throughout the institutional Church until the public revelations that began in 1984 and reached a boiling point in 2002 caused widespread media attention, legal scrutiny and public outrage which in turn forced the bishops to change their tactics. The John Jay report refers to the organizational steps taken by the bishops in response to the “crisis” and points out that no other institution has undertaken a public study of sexual abuse and as a result there are no comparable data from other institutions (Executive Summary, p. 5).

A similar study of the institutional response itself would show that the organizational steps including the John Jay and other reports were the result of the intense pressure on the bishops from outside the clerical enclave to face the reality of the nightmare they had caused. It is true that some of these policies and procedures are very positive steps in the right direction. What cannot be ignored however is the harsh reality that the Catholic hierarchy from the top down will remain defensive, in futile search for the trust, respect and deference they once enjoyed but which now is a memory.

The report gave short shrift to mandatory celibacy and the all-male environment of the clerical world. This will feed right into the defenses of those who try to claim that the problems are all from outside influences. Yet the influence of mandatory celibacy and the sub-culture of which it is an integral part play a major role in the socialization and maturation processes of the men who will eventually violate minors. The clerical culture should have been the subject of the 1.8 million dollar venture because if looked at closely and honestly it would have yielded information that not only provided believable reasons for the abuse nightmare but valuable though radical steps to take to avoid similar travesties in the future. That would have been much too dangerous for the hierarchical establishment though, because without doubt, it would point to needed fundamental changes.

There will be a variety of levels of both praise and criticism of this document. Among the more valuable will be the critical responses of other academic professionals, especially sociologists, which will help place the document in a more realistic and relevant light.

The report was released along with statements by Karen Terry, the lead investigator, Diane Knight, chair of the National Review Board and Blase Cupich, chair of the Bishop’s Committee for the Protection of Children. The most disturbing sentence of all of the documents presented with the report is from Karen Terry’s statement: “The problem of sexual abuse of minors by Catholic priests in the United States is largely historical, and the bulk of cases occurred decades ago.” I am quite certain that Dr. Terry had no idea of how offensive this statement is to the thousands of victims who were abused decades ago and who still live with the intense pain that never goes away. These people aren’t “historical” they are now. What happened to them years or decades ago is still real and still destructive in their lives.

While the bishops and their defenders bask in the illusion that this report validates their standard defenses and their self-affirmation for the procedures and policies they have created to try to heal the wound, the reality of the “phenomenon of sexual abuse” is something this report will not be able to answer. What is important is not why the thousands of clerics went off the tracks and raped and violated tens of thousands of innocent children.

What is important is what the institutional Church has done, or to be more precise, not done, to help heal the thousands of victims who still live in isolation and pain. More than anything else these men and women have had their very souls violated and in the words of some, murdered. Rather than go to such great lengths to try to exonerate themselves the bishops could have done what they should have done…..try, at least, to begin to understand the profound depth of the spiritual wounds inflicted on these many men and women, once innocent and trusting boys and girls. Abandon the insincere promises, the endless efforts to hide the secrets and the debasing legal strategies to pound the victims into submission. Once the official Church figures out how to authentically respond to its victims, and actually does it, then and only then will this abominable disgrace start to slowly move towards being historical.

Tom Doyle is a priest, canon lawyer, addictions therapist and long-time supporter of justice and compassion for clergy sex abuse victims. He is a co-author of the first report ever issued to the U.S. bishops on clergy sex abuse, in 1986.