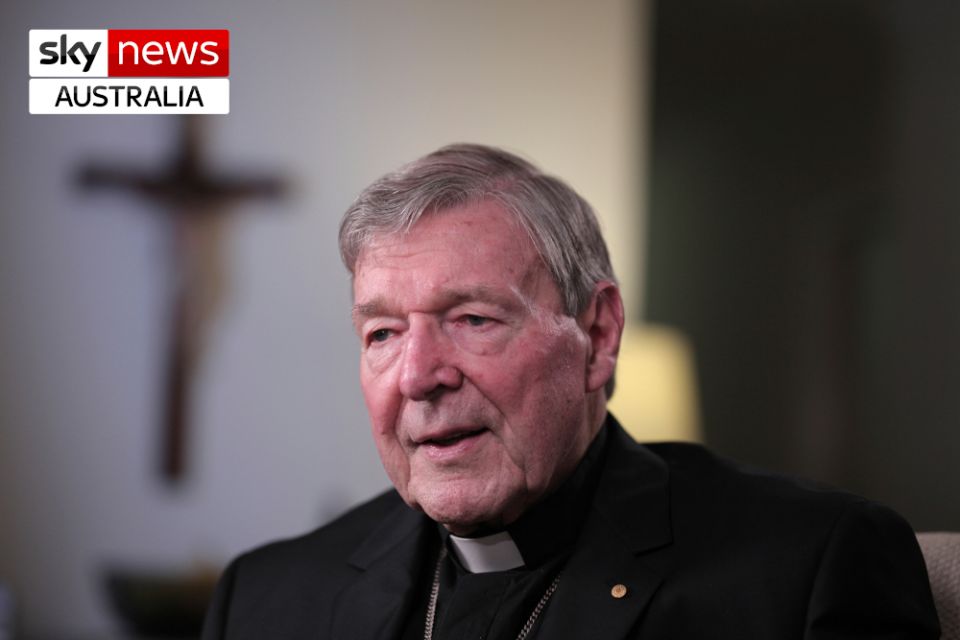 In this April 10, 2020, photo provided by Sky News Australia, Cardinal George Pell is interviewed in Sydney following his release from prison after Australia's highest court cleared him of child sex crimes. Pell, Pope Francis’s former finance minister said in a television interview broadcast on Tuesday, April 14, 2020, that some church officials believed that he was prosecuted by Australian authorities because of the trouble he had caused in the Vatican with financial reforms. (AP/Sky/News Australia)

CANBERRA, Australia — Cardinal George Pell has linked his fight against corruption in the Vatican with his prosecution in Australia for alleged child sex abuse.

Pell was regarded as the third highest-ranking Vatican official in 2018 when he became the world's most senior Catholic to be convicted of child sex abuse. He served 13 months in prison before Australia's High Court last week acquitted him of molesting two choirboys in St. Patrick's Cathedral in Melbourne while he was archbishop of Australia's second-largest city in the 1990s.

Pope Francis' former finance minister said in a television interview broadcast on April 14 that some church officials believed he was prosecuted by Australian authorities because of the trouble he had caused in the Vatican in implementing financial reforms.

"Most of the senior people in Rome who are in any way sympathetic to financial reforms believe that they are" linked to the prosecution, the 78-year-old cleric told Sky News.

"What was surprising was even my theological opponents in Rome didn't believe the stories" of sexual abuse, he added.

Pell said he did not have evidence of a link. But he suspected that a man who swore he had been sexually abused by Pell as a 13-year-old choirboy more than two decades ago had been "used."

Francis created the Secretariat for the Economy, and named Pell its prefect, as a key part of his financial reform plans after being elected pope in 2013. Pell had tried to wrestle the Holy See's opaque finances into order and align them with international standards, but his efforts and brusque style were rebuffed repeatedly by the Vatican's old guard.

Pell stood aside from the job in 2017 to return to Australia, determined to clear himself of decades-old allegations of child sex abuse.

Alves came to his new job in a period of financial crisis, after Vatican prosecutors raided the Secretariat of State and the Holy See's financial watchdog after receiving reports of a suspicious real estate transaction.

Pell said Francis had "absolutely" supported him, even though "My theological views ... don't line up exactly with Pope Francis."

"I think he values my honesty and perhaps that I would say things that some other people mightn't say, and I think he respects me for that," Pell added.

Pell said that neither Francis nor Vatican Secretary of State Cardinal Pietro Parolin were corrupt, but that he did not know how high Vatican corruption rose.

"Just how high up it goes is an interesting hypothesis," he said.

Pell said he'll return to Rome after the coronavirus pandemic to pack up his apartment, but that he plans to make his new home in Sydney, where he had been archbishop.

Victoria police refused to comment on newspaper reports April 14 that they have launched a new investigation of another child abuse allegation against Pell dating back to the 1970s.

Pell said he "wouldn't be entirely surprised" if police continued to pursue him. He has denied any wrongdoing.

Pell said he was "ashamed" of his church over its child abuse crisis.

"There are two levels. One is the crimes themselves and then the treating it so inadequately for so long," Pell said.

He warned in child abuse cases that "guilt by accusation" was "not a sign of a civilization."

"The pendulum 30 or 40 years ago was massively against anybody who said that they'd been attacked," Pell said. "Nowadays we don't want it to swing back so that every accusation is regarded as gospel truth. That would be quite unjust and inappropriate."

Pell's accuser in his trial, a man in his 30s whose identity is concealed by law, said in a statement last week that he hoped Pell's acquittal would not deter child abuse victims from reporting to police.