Avoiding the blame game on abuse 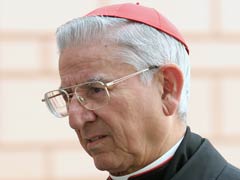 On the heels of a cause célèbre in Ireland over a 1997 Vatican letter expressing doubts about “mandatory reporter” policies on sex abuse, another piece of Vatican correspondence has come to light, this one from 1984 and addressed to the then-bishop of Tucson, Ariz. It insists that “under no conditions” are the personnel files of a priest accused of misconduct (in this instance, not sexual abuse) to be turned over to civil lawyers.

The 1984 missive from the Congregation for the Clergy, then headed by Cardinal Silvio Oddi, to Tucson Bishop Manuel Moreno was released by BishopAccountability.org, and is being cited as another example of a Vatican policy against cooperation with police and prosecutors.

Anyone who thinks these two letters are the end of the line is in denial. Diocesan archives all over the world are undoubtedly stuffed with letters from Vatican officials advising bishops to protect the confidentiality of church records, and as lawyers, reporters and activists continue to dig, more will come to light.

One option for the Vatican is to counterpunch, hoping to explain away each document as it emerges. If it hasn’t already, that strategy will run out of gas quickly as the broad pattern becomes undeniable. The other choice is to concede reality, which is that until very recently, the primary concerns vis-à-vis cooperation with police and prosecutors, aside from the sanctity of the confessional, were the following:

(In a global perspective, there’s a further consideration. There are regions of the world where civil authorities are hostile to the church, and mandatory reporter policies would be ill-advised. That, however, doesn’t apply to the United States or Ireland, especially decades ago.)

The values listed above are entirely legitimate, and it’s no scandal that Vatican officials strove to defend them. Yet it’s only been in the last decade that officialdom has acknowledged the need to balance such concerns against compassion for victims and the demands of civil justice. Admitting that truth won’t make hard questions go away, but it would at least take some of the sting out of each successive revelation.

Doing so would have another virtue, which is that it might cut short an ugly bit of subtext presently metastasizing in the church -- the blame game. As long as the fiction must be maintained that ambivalence about cooperation was an aberration, rather than the norm, then somebody has to take the fall for it.

When the dust settled on the first wave of the American crisis, the Vatican seemed content with a perception that decisions to conceal abuse had been made by local bishops without any involvement in Rome. Some observers in Ireland drew a similar conclusion from Pope Benedict XVI’s letter to the Irish church last year -- that Rome was attempting to dislodge blame onto the bishops.

Today, when Vatican officials are asked why these crimes weren’t reported to police, the usual answer is that nothing in canon law prevented it. However true it may be, that reply can suggest that if a bishop didn’t make a report, it’s his problem. Officials rarely go on to say that bishops may have hesitated because they reflected a culture of confidentiality that Rome not only shared, but helped to forge.

As the current apostolic visitation in Ireland unfolds, some in the Irish church are pushing back, suggesting that the bishops’ hands were tied by Roman policies. A documentary produced by Irish broadcaster RTE quotes one anonymous bishop to the effect that he believed the 1997 letter ordered him to cover up accusations against priests. (While that may be how he read it, the letter in fact is not a directive but a statement of opinion from one Vatican department.)

Even in the Vatican itself, the blame game is afoot.

Last year, when a 2001 letter congratulating a French bishop for not reporting a priest to the police came to light, a Vatican spokesperson pointed out the letter came from Colombian Cardinal Darío Castrillón Hoyos, then the prefect of the Congregation for Clergy. According to the spokesperson, the letter illustrated the obstacles that Cardinal Joseph Ratzinger, today Pope Benedict XVI, had to overcome in pushing for a more aggressive response.

In effect, that was a way of cutting Castrillón Hoyos loose.

As fate would have it, the 1997 letter in Ireland also stems from Castrillón Hoyos. It’s signed by the then-papal ambassador in Ireland, but it communicates the results of a study of proposed Irish sex abuse policies carried out by Castrillón Hoyos’ office.

It’s not clear, however, that casting Castrillón Hoyos in the villain’s role will hold up.

Italian journalist Andrea Tornielli recently penned a convincing essay arguing that Castrillón Hoyos was hardly a rogue figure. Instead, ambivalence about opening up to civil authorities -- especially about bishops turning their priests over to the police -- represented the mind of the Vatican throughout the 1990s and well into the early 2000s. Tornielli could have added that it was also the mind of a broad swath of the hierarchy around the world, as illustrated by a series of public comments at the time from Latin American cardinals.

The truth, Tornielli writes, is that there has been “a path, a growth in awareness, and a gradual adoption of more adequate instruments” for fighting the abuse crisis. In that light, he says, it’s a mistake to turn Castrillón Hoyos into a scapegoat.

Here’s the reality: In the main, it’s not that local bishops wanted to cooperate but were barred by a secret Vatican edict, and neither is it that Rome, aside from a few troglodytes such as Castrillón Hoyos, always believed in full transparency. Until quite recently, the culture in institutional Catholicism, at all levels, put a greater premium on the church’s independence and its right to privacy than on seeking justice for the victims of sexual abuse. Everyone helped create that culture, and everyone must share in reforming it.

Enormous progress has been made, but it’s still a work in progress, and a hunt for smoking guns and scapegoats won’t help.