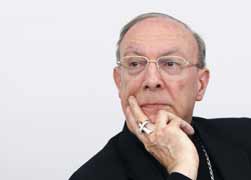 In a Nov. 2 announcement, Jürgen Mettepenningen compared Léonard's leadership to a reckless driver headed in the wrong direction.

"For the sake of the church I really should have spoken out more often and more clearly," Mettepenningen said.

In October, Léonard seemed to drop exploding bombs every time he met the press. AIDS, he said, is a matter of "immanent justice" for people who misuse their bodies. Homosexuality is a form of human sexuality that has developed in the wrong way and is a disease like anorexia. And most recently —- retired pedophile priests should not be prosecuted but allowed to live out their remaining years in tranquility.

The Belgian secular press said Léonard's statements were outlandish and disgusting. European Union President Herman Van Rompuy, a Belgian, said in a press conference that he is "shocked, disgusted and angered" about what is happening in the contemporary Belgian church. Other Belgian politicians have called for Léonard's resignation.

The Belgian Catholic press, and at least two Belgian bishops, have publicly distanced themselves from Léonard's positions.

At the end of October, Léonard announced that he would keep quiet until Christmas.

What Léonard meant, of course, was that he expected his press officer, Jürgen Mettepenningen, to put out the fires, "clarify" the archbishop's remarks, and calm the storms of anti-Léonard protest. Mettepenningen is young, bright, strongly committed to the church, and a careful and diplomatic public speaker.

On Nov. 2, in an announcement tinged with strong emotion, Mettepenningen said he had had enough and quit.

Mettepenningen, 35, has two small children and is an historical theologian, trained at the Catholic University of Leuven. He spent the past weekend (an extra long holiday weekend because Nov. 1 is a Belgian national holiday) discussing his Léonard-dilemma with his wife and pondering what he should do. On Tuesday, he made his announcement:

"This past All Saints weekend, I finally had personal time and some time to really get things straightened out in my own head. The archbishop can be a very likeable man; but that is not the case in a professional relationship. The bucket is full. For the sake of the church I really should have spoken out more often and more clearly....Archbishop Léonard is no leader. He behaves like a reckless driver headed down the highway in the wrong direction -- thinking everyone else is at fault...and I see no perspective for improvement."

Before becoming press officer for Léonard and for the Belgian conference of bishops, Mettepenningen had already established himself as an open-minded theologian well rooted in Catholic tradition and history. He is an expert on the nouvelle theologie (the "new theology") that laid the foundations for the Second Vatican Council. And his 2008 book De Kerk Bloost ("The Church Blushes") leaves no doubts about where he stands in contemporary church debates.

"Yes," he said, "there was a flood of tears when I finally made my decision on Monday night. I am angry because I wanted what is best for the church. Because of one man I have to resign. I am out of work but not without hope."

When pressed further about his assessment of his former boss, Mettepenningen could not have been clearer. Archbishop Léonard had promised to maintain media-silence until Christmas; but then, coming as a complete surprise to his press officer, he broke his word twice this past weekend, creating another storm of protest. This did it for Mettepenningen: "If the archbishop cannot keep his word and there is not 100 percent trust, then I have a very big problem. And so that stops right here."

Asked if he thought Léonard should resign, Mettepenningen told reporters: "That is not for me to say. It would certainly have been better if someone else were sitting in his place. All the papers are now saying that the man has totally isolated himself. And I believe that is really the case now. Just about everyone in the [Belgian] church is against him."

The movement against Léonard is gathering energy in both parts of Flemish/Walloon Belgium. Petitions are circulating among professors at the French-language University of Louvain (Université Catholique de Louvain) to have Léonard removed as chairman of the university's board of directors.

Benedict's record on abuse: all talk and no action