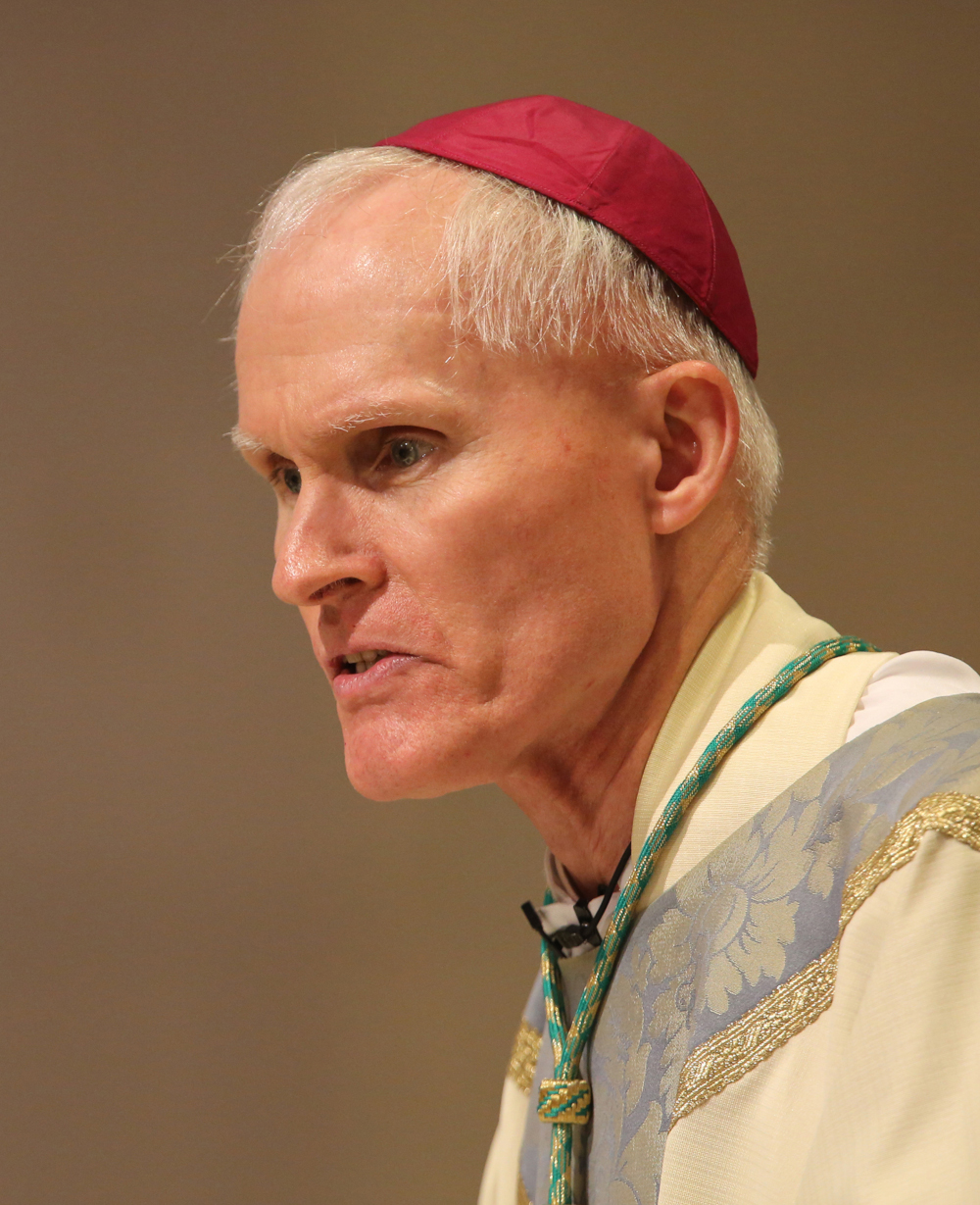 Bishop Mark Brennan of Wheeling-Charleston, W.Va., in an Oct. 31, 2019, letter to Catholics in the state, said he is working to have his predecessor, retired Bishop Michael Bransfield, "make amends for harm he caused during his tenure" as mandated by Pope Francis. Brennan is pictured during his installation Mass Aug. 22 in the Cathedral of St. Joseph in Wheeling. (CNS/Bob Roller)

Cardinal Daniel DiNardo, president of the U.S. Conference of Catholic Bishops, in consultation with the members of the bishops' conference Administrative Committee, has taken the highly unusual step of disinviting a fellow bishop from the conference's fall general assembly.

The action comes under one section of the recently adopted "Protocol Regarding Available Non-Penal Restrictions on Bishops."

Bishop Mark Brennan, who succeeded Bransfield, said he initiated the process under the protocol soon after he was installed Aug. 22 to head the West Virginia diocese.

Brennan told Catholic News Service Nov. 4 he sent his request to DiNardo of Galveston-Houston, U.S. bishops' conference president, out of respect for the faithful of his diocese and to prevent any embarrassment to the conference if a bishop who is surrounded by serious allegations was welcomed to the fall assembly.

"The people of this diocese would be very upset and angry to think he (Bransfield) would be participating in decisions that might well affect them," Brennan explained.

"I can't say what the reaction of the bishops would be if he showed up," he added. "I think, one, it would be kind of distressed. Would he be received with Christian charity? One would hope so, but one never knows."

Brennan said he told his predecessor he would be making the request to the bishops' conference leadership. The Administrative Committee consists of the officers, chairmen and regional representatives of the conference.

"I communicated with Bishop Bransfield I would be making this request (to formally disinvite him), and he said both orally and in writing that he did not intend to go. I think that's good. As he put it, it would be embarrassing for him and for everybody," Brennan said.

"Lest there be any criticism that the bishops don't care about it, well, yeah, we do," he said. "So I took the formal action to ask that he not be invited. And he wasn't. His best interest as well as ours as a bishops' conference are best served by him not being there."

The protocol was one of a series of responses adopted by the bishops' conference in June at its spring general assembly following reports in 2018 that detailed sexual abuse allegations against priests and prelates in several dioceses dating back decades.

Section 12 of the protocol allows the bishops' conference president to consult with the Administrative Committee and then instruct the conference's general secretary to disinvite any retired bishop "who resigned or was removed from his office due to sexual abuse of minors, sexual misconduct with adults, or grave negligence in office."

Brennan also said he continues to work with Bransfield on making financial "amends" to the diocese for the misappropriation of diocesan funds.

He has written two letters to parishioners in the diocese since his installation. The first, in September, provided an update and to "assure them it is true I am working on the whole matter of Bishop Bransfield making amends and hope to bring that to a conclusion soon."

The second, dated Oct. 31, reiterated that he continued working with Bransfield to "make amends for harm he caused during his tenure."

In July, Pope Francis announced disciplinary actions for Bransfield, prohibiting him from living in the Diocese of Wheeling-Charleston and from presiding or participating anywhere in any public celebration of the liturgy.

As part of those disciplinary actions, a communique from the apostolic nunciature in Washington posted on the diocesan website in July also said Bransfield would be obligated "to make personal amends for some of the harm he caused; the nature and extent of the amends to be decided in consultation with the future bishop of the Wheeling-Charleston."

Since being installed, Brennan said he has been visiting parishes throughout West Virginia to "get to know the people of the diocese" and to "hear from them."

He said he has been asking people about their thoughts about the church, learning what the church could be doing better and asking, "How can I be helpful?"

"I've been impressed with the strong faith, the commitment to community life and to service," the bishop told CNS.

But underlying the visits is concern for the status of the church in a state that has been wracked by high levels of poverty, unemployment and opioid abuse.

"People want this issue to be resolved. They want the scandal to kind of go away," he said.

"The other matters, including the Bransfield matter and some other issues that are on the table, they're real. I am devoting some time and energy to them. But I don't want them to distract from the main business, which is to become familiar with the people, what they're doing and what more the church could be doing."