Bp Morris: 'Youíve got to stand in your truth.' 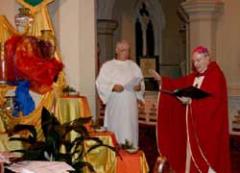 The Advent Pastoral Letter of 2006, cited as the beginning of the controversy that resulted in the recent forced retirement of Australian Bishop William Morris, deals primarily with plans to provide diocesan leadership in a future with dwindling access to the Eucharist and priests.

In the letter, Morris informed local Catholics that, as things stood at the time, by 2014 his rural diocese of Toowoomba would have only six priests 65 years and younger in parish-based ministry, with three aged 61-65, and eight 66-70.

Morris, who had been the bishop of Toowoomba for 18 years, was forced to retire May 1.

Having stated that background, he penned the paragraphs that apparently have caused him to lose his job:

“Given our deeply held belief in the primacy of Eucharist for the identity, continuity and life of each parish community, we may well need to be much more open towards other options for ensuring that Eucharist may be celebrated. As has been discussed internationally, nationally and locally the ideas of:


“We remain committed to actively promoting vocations to the current celibate male priesthood and open to inviting priests from overseas.”

Meanwhile, in an on-camera video accounts to emerge from Toowoomba, Morris admitted he may have stepped on “too many toes” when he suggested in the 2006 pastoral that his rural diocese might benefit from the Vatican considering the ordination of women and married men.

The bishop’s comments came during interviews for two television news reports by Australia’s ABC News, which were posted to its Web site May 4.

In one of the ABC reports, Morris is seen walking around his diocesan office, taking books from his bookshelves and placing them into boxes.

Speaking to a question on whether there might be a process for him to appeal his forced retirement, the bishop answers: “It’s only now that most of us, as bishops, found out there is no process for bishops. We didn’t know that before.”

Morris also said he had a private meeting with Pope Benedict XVI on the issue and it was not fruitful: “You don’t get much debate. He has a view and you have a view and you kind of part on those views.”

The visibly shaken archbishop said he recognized a tension between his love for the church and confusion about the move. “The church makes mistakes, has made mistakes, but I love the church. It’s simple like that.”

In a May 3 interview with the Brisbane Times, Morris told a reporter the Vatican investigated him for being “too open” and “too inclusive” in his approach. He said he was not advocating any of the alternatives listed in his letter, but rather pointing to the debate that was going on throughout the church.

Morris’ ouster has prompted public support for the bishop from a wide range of organizations, including the National Council of Priests of Australia, the country’s Vincentian province, the Brisbane Times, and the U.S. Women’s Ordination Conference.

The full text of the pastoral letter can be found here.

Accountability | Bp Morris: 'Youíve got to stand in your truth.'