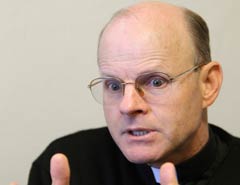 To judge exclusively by media coverage and lawsuits, one might think the only choice facing the Catholic hierarchy vis-à-vis the sexual abuse crisis is to stand pat or to go further toward greater disclosure, a more aggressive crackdown on priests who abuse, perhaps even more resignations by bishops. Debate is typically framed in terms of just one question: Has the church done enough?

Quietly but insistently, however, some important voices in Catholicism are arguing that the church has already done too much.

Backlash against the get-tough approach has long circulated among some priests who say they’ve been thrown under the bus and some clinical experts who worry that cutting predators loose puts the community at risk. Increasingly, it’s also finding traction among Catholics who believe that the church’s doctrine, especially its theology of the priesthood, and its moral standing are being sacrificed upon the altar of short-term PR and legal relief.

A disparate range of voices is arguing for reconsideration of the three pillars of Catholic officialdom’s sex abuse strategy:

At the moment, bishops in the United States don’t seem disposed to any sweeping revision of those pillars. In particular, for reasons both pastoral and political, they’re strongly committed to the zero-tolerance policy. Over time, however, the bishops may be open to a rethink on other fronts, perhaps especially protecting the rights and reputations of priests against false accusations.

If nothing else, all this illustrates that the pressures facing church leaders are more complicated, and conflicting, than observers unfamiliar with the contours of Catholic life often imagine.

Perhaps the most prominent recent expression of the case for reconsideration came in a widely read Jan. 4 essay in First Things from Fr. Thomas Guarino, a theologian at Seton Hall University in South Orange, N.J. Titled “The Priesthood and Justice,” the essay ascribed the adoption of a zero-tolerance approach in part to the bishops’ fear of “bad public relations and a financial whipping.”

Guarino argued that zero tolerance -- especially forced laicization, meaning removal from the priesthood against a priest’s will -- distorts the theology of the priesthood, turning it into a job from which one may be fired for poor performance, rather than a permanent sacred calling.

“This may have the short-term advantage of preventing litigants from storming the church door,” Guarino wrote. “It may keep the media at bay for the moment -- a media that, in any case, will always find the church a stumbling block ... But such actions are also having the disastrous effect of eroding Catholic doctrine, the only treasure that the church really has to offer.”

Guarino suggested that alternative forms of ministry could protect children and young people, but also allow for “forgiveness and rehabilitation of the sinning priest.”

Other figures continue to question zero tolerance on different fronts.

Msgr. Stephen Rossetti, a psychologist and theologian at The Catholic University of America, was a consultant to the U.S. bishops who drafted the zero-tolerance policy in 2002. He warned at the time that dismissing a priest found guilty of abuse, with no supervision or support, may increase the chances of him re-offending.

Looking back, Rossetti said in a Jan. 31 e-mail that zero tolerance represented not just a media demand but also “the voice of the people” in the church, so the bishops had no choice.

“The justifiable outrage connected with this crime blinds us to more rational thinking,” Rossetti said. The zero-tolerance approach, he said, has made the church safer, but potentially at the cost of putting society at greater risk.

Whatever the force of those arguments, the leadership of the U.S. bishops’ conference appears convinced that the risk of returning an abuser to ministry is too great to bear.

“The rate of recidivism is high enough that it’s too dangerous to put anybody back,” said Cardinal Francis George of Chicago, past president of the U.S. bishops’ conference, in a January interview with NCR.

“A bishop has to be able to say, ‘I’m putting before you someone trustworthy.’ I can’t say that about anybody who has done this,” George said.

Another front where voices are questioning the official approach is in the arena of public rhetoric, especially continued public apologies for the crisis -- which some see not only as groveling but also unproductive, prolonging a sense of paralysis without mollifying critics.

One expression of that sentiment came during Benedict’s visit to the United Kingdom last September, where the pontiff once again expressed sorrow to victims and shame for the crisis. At the time, some of the pope’s allies openly wondered about the wisdom of maintaining the penitential tone.

“There isn’t a chance in the world of anyone else moving on if the church doesn’t move on,” said Ann Widdecombe, a prominent British politician and an Anglican convert to Catholicism.

“The next stage has to be to figure out how to deal with this, without forever going over the past,” she said.

That’s a view with some support in traditional Catholic circles.

Last October, Michael J. Matt, editor of The Remnant newspaper, wrote: “These apologies are becoming the media centerpiece of papal visits, seemingly designed to parade the sins of the church up one side of the street and down the other, crippling her moral authority in the process.”

Here too, most church leaders don’t seem ready to rethink their approach.

Archbishop Timothy Dolan of New York, president of the U.S. bishops, said in a recent interview that projecting a “sense of contrition” is one way for church leaders to recapture credibility.

“What we have to do, and the bishops have to lead it, is one big fat mea culpa,” Dolan said. “We can’t get tired of that, and we have to mean it.”

A final element of the case for reconsideration may have more short-term traction, which is the argument that the process doesn’t protect priests adequately against false accusations. One prominent voice on that front is the Detroit-based group Opus Bono Sacerdotii, meaning “Work for the Good of the Priesthood,” which provides support for accused priests.

“The bishops may face a crisis in the ranks of the priesthood, with at least a thousand innocent priests who have been removed and remain out of public ministry because of unproven accusations,” Joe Maher, president and founder of Opus Bono Sacerdotii, said in a Feb. 1 e-mail.

“Active priests are aware of how their accused brethren are being treated by the bishop and wonder what kind of support, if any, will come if they are accused,” Maher said, who added that today the bishops are trying to “sort out” the right way to proceed.

On Jan. 14, the group circulated an e-mail fundraiser featuring the story of an unnamed priest accused in 2009 of spending too much time with a teenager. The priest was removed from ministry, after what he described as a “very biased” assessment by a diocesan-recommended psychologist who had, the accused claimed, a vested interest in a drumming up business for a treatment program. With the support of Opus Bono Sacerdotii, the unnamed priest said, other psychologists cleared him and he was returned to ministry.

Both George and Dolan flagged the danger of false allegations as an area in which U.S. policies may need reform.

“We have to keep looking at the process, so that predators are permanently removed but in a way that also doesn’t harm people who are innocent,” George said.

Dolan echoed the point, saying that his major regret about the way cases were handled at the outset of the crisis is that some priests were publicly removed and thus branded as abusers, even though the allegations were impossible to substantiate, “and to this day they’re living with that terrible burden.”

Dolan said that under current rules, any credible but unsubstantiated allegation triggers suspension pending a preliminary investigation -- “and in the vast majority of instances,” he said, “you can’t remove a guy without people jumping to conclusions.”

The problem is compounded, Dolan said, by what he and others perceive as a higher percentage of false accusations today. During the initial outbreak of the crisis, he said, “the vast majority [of accusations] tragically were accurate ... I wouldn’t say that anymore.”

Both prelates suggested that the risk of further abuse makes it difficult to revise the policy of immediate suspension, but said more thought needs to be given to how a priest who’s cleared can win back his good name.

If there is to be an evolution, today’s whispering campaign may have to become more vocal -- especially in offering cover to bishops when they step outside the zero-tolerance box.

Dolan cited the case of Msgr. Wallace Harris, a popular pastor in Harlem accused of sexually abusing high school students in the 1980s. Harris resigned and officials vowed that he will never return to ministry, but Dolan did not remove him from the priesthood.

Dolan wondered why Catholic voices pushing for a reconsideration of zero tolerance weren’t more outspoken in support of his handling of the Harris case.

“Where are these guys when The New York Times and company blasts me, or SNAP [the Survivors Network of those Abused by Priests] and everybody pickets me?” he asked. “Are they defending me when I’m being attacked for letting him keep his priesthood? No, they run for cover.”

Such reactions suggest that unless what Rossetti described as the “voice of the people” changes its tune, some tinkering may occur, but in general zero tolerance will remain the order of the day.

Tell the truth, as damning as it may be

'Listen to the heart of our people,' Sr. Teresa Maya tells US bishops

Australian bishops to implement new protocol on responding to abuse