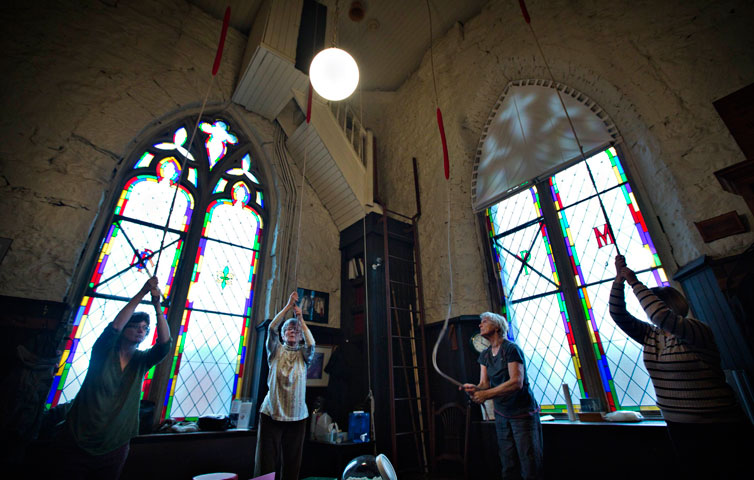 Canada's bishops sent the results of a consultation to prepare for an October global Synod of Bishops on the family to the Holy See at the end of February, but they will not make their report public, which is normal practice, according to the president of the Canadian bishops' conference.

This is not the first time Rome has invited input from bishops' conferences in advance of a synod and the normal practice has been to do so privately, said Canadian Conference of Catholic Bishops president Archbishop Paul-André Durocher.

"We are deciding to follow the guidelines given to us," Durocher said.

One hundred forty bishops' conferences are to submit consultation reports to the Vatican's Secretariat of the Synod of Bishops, which organizes these global gatherings of Catholic bishops. The Holy See will use the material to build the synod's lineamenta, or working document, Durocher said.

The secretariat sent a 39-question survey to the world's bishops Oct. 18 with a request that they consult "immediately" and "as widely as possible" about issues such as contraception, same-sex marriage, divorce and other topics touching on family life.

According to Durocher, the Canadian bishops' conference sent the questionnaire to its member dioceses, inviting them to send in summary responses by the end of December, so the conference could send a summary of all the findings by the end of January.

"In a very short time frame, we managed to get a good read of the pastoral situation regarding family life here in Canada," Durocher said.

Bishops' conferences around the world took varying approaches to the Vatican's call for wide consultation. In England and Wales, the national bishops' conference posted the 39 questions online.

Putting the questions online was not mandated, but Cardinal Lorenzo Baldisseri, head of the synod secretariat, said in December that bishops should go beyond the usual consultations.

"The consultation must gather information from the grassroots, and not limit itself to the level of the Curia or other institutions," he said. "Though involved in the process, they must cooperate by addressing themselves to the faithful, to communities, to associations and other bodies."

In Canada and the United States, the national conferences left decisions about how to consult the laity up to individual bishops. About 80 U.S. dioceses made the family synod survey available online (NCR, March 14-27).

A census of Canadian diocesan websites, conducted by The Catholic Register newspaper in December, when the consultation process was active, found 13 of the 69 dioceses that have websites had posted the Vatican's questions online. Four of Canada's 73 Catholic dioceses have no website.

Conference general secretary Msgr. Patrick Power noted in a Feb. 5 statement that "the extent of the consultations by the dioceses and their responses are clear evidence of the pastoral importance" of the synod.

"The consultations indicate not only the importance of marriage and family life for both the church and our society, but also the church's deep appreciation for the generous witness and commitment of married couples and families, especially in today's world of rapid social change and significant economic challenges," Power said.

"At the same time, the process has shown many Catholics are not deeply aware of the church's rich and positive teaching on marriage and family. This can result in a troubling gap between the church's doctrine and the thinking of a number of Catholics. There are also hopes the church could be more effective in presenting its teaching, and might also review aspects of its discipline in certain areas," Power said.

Survey results made public by other national bishops' conferences -- such as Germany and Switzerland -- show a clear divergence between what the church teaches on marriage, sexuality and family life and what Catholics personally believe.

The differences are seen "above all when it comes to pre-marital cohabitation, [the status of] those divorced and remarried, birth control and homosexuality," said the German bishops' report, posted in February on their conference website in German, Italian and English.

"Most of the baptized have an image of the church that, on the one hand, is family friendly in its attitude, whilst at the same time considering her sexual morality to be unrealistic," the German survey found.

Some Canadian Catholics sought ways to submit their views even without the express invitation of the bishops' conference. Betty Anne Brown Davidson, national president of the Catholic Women's League of Canada, urged members to make their views known.

"When I first heard about this Extraordinary Synod on the Family, I immediately got in touch with our standing committee chair for Christian family life and I said, 'Let's get this document and let's give input to our bishops through the [bishops' conference], whether they want it or not,' " Brown Davidson told The Catholic Register. "We live the reality of family life."

Church officials from the Vatican on down have stressed the difference between a consultation and a public opinion survey. Cardinal Peter Erdo, the synod's relator, told reporters in November, "The doctrine of the magisterium must be the basis of the common reasoning of the synod. It is not a question of public opinion."

But they also note preparation for this synod has been different.

Theologian Catherine Clifford of St. Paul University in Ottawa said the synod is a challenge to the way things have been done since Pope Paul VI began calling periodic synods on specific questions.

"We haven't cultivated very well within the church what I have called the habits of dialogue," Clifford said. "Just as an example, when Pope Francis and the Synod of Bishops asked bishops to consult as widely as possible at the level of deaneries and parishes, we have so little experience of that. We don't have effective structures for carrying out that or creating space for those kinds of conversations."

Still, how the church knows and understands itself from the point of view of the faithful is one of the most profound challenges in Francis' recent apostolic exhortation, Evangelii Gaudium, Durocher told The Catholic Register in December.

[NCR staff wrote this article based on reporting by Deborah Gyapong and Michael Swan that appeared in The Catholic Register, Canada's national Catholic newspaper based in Toronto. The Register material was used with permission. Reporting from Catholic News Service was also used.]

A version of this story appeared in the March 28-April 10, 2014 print issue under the headline: Canadian synod results kept private.