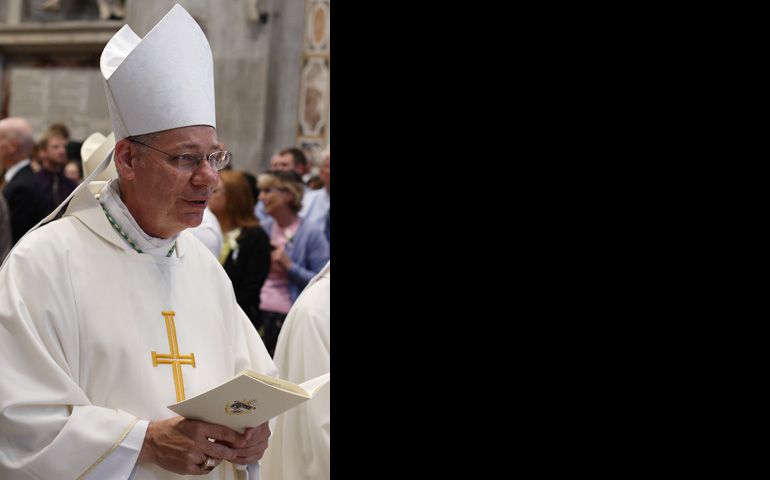 Kansas City, Mo. — When news broke Tuesday of Bishop Robert Finn's resignation as head of the Kansas City-St. Joseph, Mo., diocese, a primary question asked: Did he step down on his own, or was he forced out?

The announcement from the Vatican published in its daily bulletin said Pope Francis accepted Finn's resignation "in accordance with canon 401 para. 2 of the Code of Canon Law." Canon 401.2 reads: "A diocesan bishop who has become less able to fulfill his office because of ill health or some other grave cause is earnestly requested to present his resignation from office."

While it's possible the Vatican requested Finn resign, neither the announcement nor canon 401.2 offer clear evidence to that, according to four canon lawyers who spoke to NCR.

Fr. John Beal, professor of canon law at The Catholic University of America, said canon 401.2 places the onus on the bishop to determine if his ministry is compromised beyond repair.

"I'm sure there were lots of people pushing, but the canon itself doesn't say anything about a requested resignation. It leaves the initiative with the bishop," said Beal, who added that, like in the military, government and corporate world, there can be a thin margin between voluntary resigning and being pushed.

At a press conference here Tuesday, Teresa White, an abuse survivor who was part of a 2008 settlement with the diocese, said it was important to know if Finn was forced out.

The Vatican has not made additional comment on Finn, and statements from the Kansas City diocese and newly named administrator Kansas City, Kan., Archbishop Joseph Naumann did not specify the nature of the resignation.

The canonists made clear that the brief Vatican statement did not indicate that Finn was removed from office, which involves a separate process and typically occurs in cases where a cleric is found to have committed a crime in canon law.

Clarifying where Finn's resignation originated should remain a priority for the pope and other Vatican officials, according to canon lawyer Fr. Jim Connell: "I think the church at large needs to know the process so that other situations that need this type of attention can be addressed."

In February 2014, Connell, a member of the Catholic Whistleblowers abuse victims' advocacy group, petitioned the Vatican on behalf of Kansas City Catholics to begin a canonical review of Finn to determine if he violated church law by failing to report suspected child sexual abuse in connection to former priest Shawn Ratigan, who is currently serving a 50-year prison sentence on child pornography charges.

Finn was convicted in September 2012 in a Jackson County court of a misdemeanor for failing to report and sentenced to two years' probation. He avoided a similar charge in Clay County by agreeing to meet with the county prosecutor monthly for five years and allow oversight of the diocese's handling of any case where children might be victims.

In a statement Tuesday, Dan White, Clay County prosecuting attorney, said with his resignation, Finn "has complied with all the requirements of a diversion agreement and the diversion is considered completed and closed. Had he remained, Bishop Finn still would have had another 1½ years to go on the agreement."

"This is a substantial first step in holding Bishop Finn accountable ... because clearly the pope and the Vatican officials recognized the damage that was done by Bishop Finn, and they have called him to responsibility for that by the use of that canon," he said.

Finn is far from the first bishop to have the canon accompany his resignation. In the same bulletin, the resignation of Auxiliary Bishop José Trinidad Gonzalez Rodriguez, 71, of Guadalajara, Mexico, also referenced canon 401.2.

As the canon states, it is triggered in cases of a bishop too ill to continue in the role: for example, Bishop Donald Pelotte of Gallup, N.M., who resigned in 2008 at the age of 63 after suffering a brain injury the previous year, or Bishop Joseph Martino of Scranton, Pa., who also resigned at 63 because of what he called "bouts of insomnia and, at times, crippling physical fatigue."

In terms of grave causes, the canon has been used in instances of illicit consecration (Bishop Isidore Fernandes of Allahabad, India, in 2013), sexual relations with adult males (Bishop Francisco Barbosa da Silveira of Minas, Uruguay, in 2009) and financial maleficence (Bishop Franz-Peter Tebartz-van Elst of Limburg, Germany, aka the "bishop of bling," in 2014).

It has also appeared in numerous cases of bishops handling clergy sexual abuse allegations. BishopAccountability.org lists 16 bishops with ties to sexual abuse scandals who either resigned or were removed from 1991 to 2014; of those, six resignations cited canon 401.2. Among them were three Irish bishops (Brendan Comiskey of Ferns, James Moriarty of Kildare and Leighlin, and Seamus Hegarty of Derry), Bishop Daniel Walsh of Santa Rosa, Calif., and Cardinal Bernard Law of Boston.

Fr. James Coriden, a retired canon lawyer who taught at Washington Theological Union for more than 30 years, agreed that citing canon 401.2 in Finn's case was significant.

"That's their canonical basis for it. They're saying that it wasn't because of age or illness, it was some other reason, another grave cause," he said.

There have been no reported health issues for Finn, who is 62.

Beal, however, said he saw it as unextraordinary, since it is the only canon he knew of addressing bishop's resignations outside the traditional process, where bishops at age 75 are requested to submit their resignation from office.

A canon lawyer who spoke on background said it's fairly normal for canon 401.2 to be cited if there's an illness, but rarer to invoke the "grave cause" aspect. The canonist also said while Finn faced pushback on administrative decisions in the diocese, his conviction likely played the largest role in his resignation. But not all drew that conclusion.

"My view of this thing is that there's a lot more involved in Finn's case than the sexual abuse. From my knowledge of that situation, the divisions in that diocese are just terrible," said Coriden, who lives in Washington, D.C.

"It would be nice if it were a sign that they were going to take bishop accountability seriously, but I don't know how much one can spin out of an isolated resignation," Beal said.

As for what happens with Finn next, canon law states that a resigned bishop receives the title "emeritus" and that his diocese is primarily obligated to provide "suitable and decent support" in addition to a residence.

The Kansas City-St. Joseph diocese is financially responsible for Finn, according to Jack Smith, the diocesan spokesman. That may change when and if Finn receives another assignment, but "at the moment, his salary and benefits are the same as a priest who has been ordained the same number of years," Smith told NCR Wednesday.

The canonists who spoke to NCR said while it's possible a bishop could be advised not to use the "emeritus" title, they saw nothing in Finn's case that would overwrite the diocese's obligations to him.

"[Canon law] is just saying that they can't just let him starve somewhere. They have to take care of him. But it's up to him where he wants to live," Coriden said.

Should Finn opt to live outside the Kansas City diocese, such a move wouldn't be uncommon, Beal said.

For now, Connell said the next step toward healing in the diocese must include Finn in the form of dialogue -- with abuse survivors, the community and the media -- to listen and answer questions.

"I think it's wrong for Bishop Finn to resign and simply walk away. I hope that's not his intention. I hope his intention is to now help people understand what happened," he said.