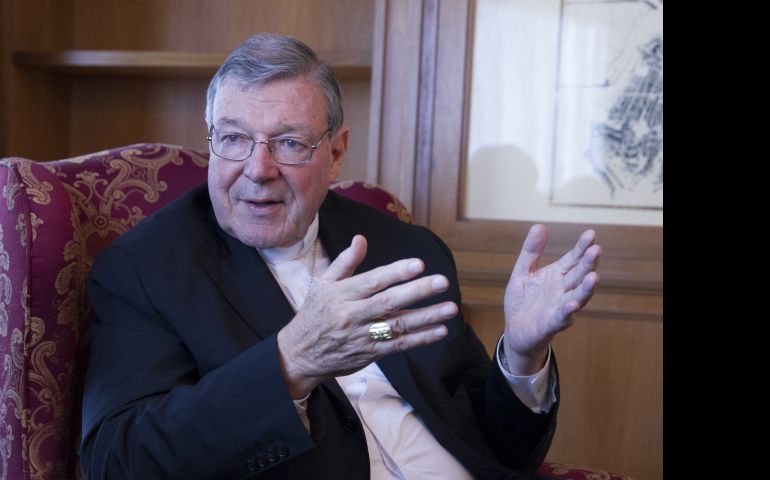 Cardinal George Pell, prefect of the Vatican Secretariat for the Economy, at his office in St. John's Tower at the Vatican Aug. 5. (CNS/Robert Duncan)

Vatican City — One of the most powerful men in the Vatican, charged with cleaning up corruption and fostering financial reform, has outraged survivors of sex abuse by clergy by likening the church to a trucking company that refuses to take responsibility for a driver who molested women.

Cardinal George Pell, a member of Pope Francis’ advisory Council of Cardinals, was appointed the Vatican’s first economic prefect early this year by a pontiff who openly admires his “tenacity.”

But the former archbishop of Sydney has been unable to put Australia’s clerical sex abuse scandal behind him since his move to Rome.

Victim support groups expressed their anger this week after Pell gave video testimony from the Vatican to an Australian government inquiry looking into responses to child sex abuse by the Catholic Church and other institutions.

Using a hypothetical example, Pell said the church was no more responsible for cases of child abuse carried out by church figures than a trucking company would be if it employed a driver who molested women.

“It would not be appropriate, because it’s contrary to the policy, for the ownership, leadership of that company to be held responsible,” Pell told the inquiry. “Similarly with the church and the head of any other organization.

“It is, I think, not appropriate for legal culpability to be foisted on the authority figure.”

The Survivors Network of those Abused by Priests, which represents 18,000 people around the world, said it was appalled by Pell’s testimony and accused the Vatican of failing to protect children.

Victims were also outraged by the Vatican’s refusal to hand over files requested by the Australian inquiry since the pope has signaled a tougher approach to fighting clerical sexual abuse and established a Vatican committee that includes Irish abuse survivor Marie Collins.

Francis met six victims of clerical sexual abuse — from Germany, Ireland and England — for the first time in July and asked for their forgiveness.

In May, a U.N. panel was told that 848 clerics had been expelled from the church between 2004 and 2013 for sexual abuse and the church had paid $2.5 billion in compensation to victims of clerical abuse in the U.S. alone.

No charges for St. Paul-Minneapolis archdiocese in sex abuse cases

Arsonists sought in connection with fires at three Australian parishes