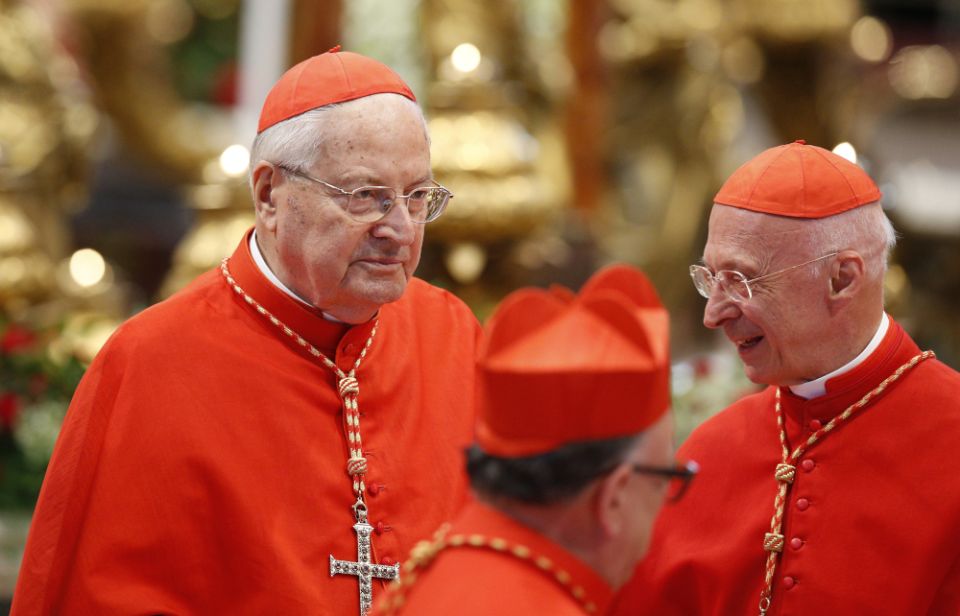 Cardinal Angelo Sodano, then dean of the College of Cardinals, left, arriving for a consistory at the Vatican in June 2018. Also pictured is Cardinal Angelo Bagnasco of Genoa, Italy, right. (CNS photo/Paul Haring)

Rome — Cardinal Angelo Sodano, a once-powerful Italian prelate who long served as the Vatican's No. 2 official but whose legacy was tarnished by his support for Fr. Marcial Maciel, the serial sexual abuser and founder of the Legion of Christ, has died. He was 94.

The Vatican in its May 28 announcement of his death said Sodano had died on May 27. Italian state radio said that Sodano recently had contracted COVID-19, complicating his already frail health. Corriere della Sera said he died in a Rome clinic where he had been admitted a few weeks ago.

Pope Francis in a condolence telegram May 28 to Maria Sodano, the retired prelate's sister, noted that Sodano had held many roles in the Vatican's diplomatic corps, culminating in his being named secretary of state on June 28, 1991, by the then-pontiff, John Paul II. A day later, John Paul, who later was made a saint, elevated Sodano to the rank of cardinal.

In the condolence message, Francis expressed "sentiments of gratitude to the Lord for the gift of this esteemed man of the church" and paid tribute to his long service as a Vatican diplomat in Ecuador, Uruguay and Chile in South America, Francis' native continent.

But late in his Vatican career, Sodano's church legacy was tarnished by his staunch championing of Maciel, the deceased Mexican founder of the Legion of Christ, a religious order, who was later revealed to be a serially abusing pedophile. Maciel's clerical career was discredited by the cult-like practices he imposed on the order's members. An internal investigation eventually identified 33 priests and 71 seminarians in the order who sexually abused minors over some eight decades.

Sodano for years, while secretary of state under John Paul, had prevented the Vatican from investigating sex abuse allegations against Maciel. The Holy See had evidence dating back decades that the founder of the religious order — an organization that was a favorite of John Paul's for producing so many priests — was a drug addict and a pedophile.

The Vatican's biography, issued after Sodano died, made no mention of the scandals. Instead, it noted Sodano's accomplishment as a top Vatican diplomat, including his work for "the peaceful solution to the controversy of the sovereignty of 2 states," a reference to the territorial dispute that erupted in the 1982 Falklands War between Argentina and Britain.

Speaking of Sodano's career at the Vatican, which saw him serve until 2006 as the Holy See's No. 2 official in the role of secretary of state, Francis said the prelate had carried out his mission with "exemplary dedication."

In December 2019, Francis accepted Sodano's resignation as Dean of the College of Cardinals, an influential role, especially in preparing for conclaves, the closed-door election of pontiffs. Sodano had held that position from 2005.

Sodano was born in Isola d'Asti, a town in the Piedmont region of northern Italy, on Nov. 23, 1927. He was ordained a priest in 1950 and obtained a doctorate in theology at the prestigious Pontifical Gregorian University and in canon law from the Pontifical Lateran University, both in Rome.

He joined the Vatican's diplomatic corps in 1959, eventually representing the Holy See at foreign ministers' meetings across Europe.

In 2000, Sodano played a role in ending an enduring mystery at the Vatican by disclosing the so-called third secret of Fatima.

In 1917, three Portuguese shepherd children said they saw the Virgin Mary appear above an olive tree and she told them three secrets. The first two were said to have foretold the end of World War I and the start of World War II and the rise and fall of Soviet communism. Some speculated that the third, unrevealed secret, was a doomsday prophecy.

While the pope was visiting the popular shrine in Fatima, Portugal, Sodano said that the "interpretations" of the children spoke of a "bishop clothed in white," who "falls to the ground, apparently dead, under a burst of gunfire." That description evoked the assassination attempt on John Paul in St. Peter's Square on May 13, 1981, in which the pope was gravely wounded. It was the same day of the year as the first of the reported Fatima visions in 1917.

Sodano's funeral is to take place on May 31 in St Peter's Basilica. It will be celebrated by the dean of the College of Cardinals, Giovanni Battista Re, while Francis will perform a traditional funeral rite at the end of the ceremony.

The complex legacy of Benedict XVI