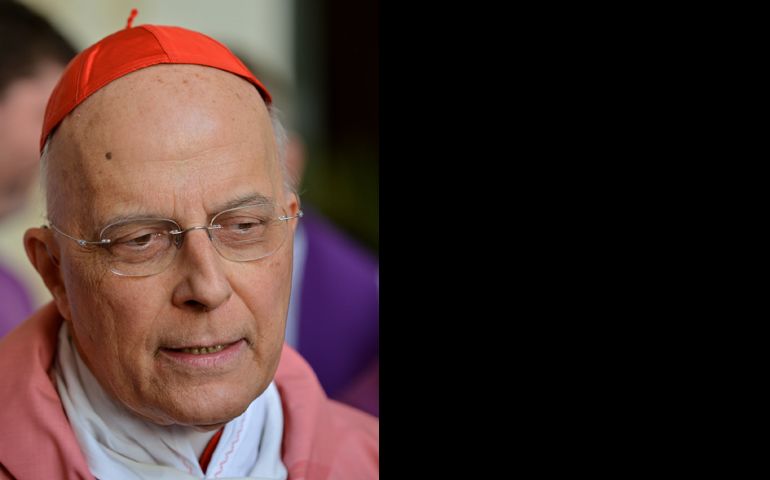 When Cardinal Francis George wrote to Chicago Catholics Jan. 12 ahead of the public release of more than 6,000 pages of documents detailing abuse allegations against and procedures related to 30 priests, he warned them to brace themselves.

"The response [by the Chicago archdiocese to abuse allegations], in retrospect, was not always adequate to all the facts," George wrote. "But a mistake is not a cover up."

More than a decade earlier, the cardinal had penned another letter addressing what he perceived to be a mistake at the time: the lengthy prison sentence of Fr. Norbert Maday.

"May this Jubilee Year bring you peace and the grace of Our Lord Jesus Christ," George wrote Jan. 12, 2000, to Maday, who was entering the sixth year of his 20-year prison sentence for sexually assaulting minors. "The very calling to mind of Isaiah's words on the Year of Jubilee echo my prayer for 'the release of prisoners.' As you know, Father Dan Coughlin and the lawyers have something under way. I pray these efforts will bear fruit."

The letter represents one of the 6,000-plus pages of priest files made public Jan. 21, part of a 2008 settlement with alleged abuse victims. The documents open the personnel files on 30 priests with credible accusations of sexually abusing children; the archdiocese lists on its website another 35 priests whose files remain sealed. Fourteen of the 30 have died.

The files extend back decades, spanning the tenures of Cardinals John Cody, Joseph Bernardin and George. According to the archdiocese, 95 percent of the cases predate 1988, and it assures that no priest with a substantiated allegation of abuse currently serves in ministry.

"The Archdiocese acknowledges that its leaders made some decisions decades ago that are now difficult to justify. They made those decisions in accordance with the prevailing knowledge at the time," it said in a statement ahead of the document release.

"We realize the information included in these documents is upsetting. It is painful to read. It is not the Church we know or the Church we want to be," the archdiocese said, apologizing "for the hurt and suffering of the victims and their families as a result of this abuse."

At a Jan. 21 press conference, attorney Jeff Anderson, who represented plaintiffs in the 2008 settlement, said the files tell a familiar tale: of choices made by top church officials to keep knowledge of problem priests among themselves and "as a result, hundreds and hundreds of children and families were imperiled."

Referring to George's statement, Anderson said the files contain "much more than mistakes," from George's handling of the Daniel McCormack case -- a former priest arrested in 2005 but left in ministry until his second arrest in 2006 -- and Bernardin's handling of a similar situation with former priest Joseph Fitzharris. It also includes the archdiocese's persistence in seeking a shortened prison sentence for Maday.

Ordained in 1964, Maday, now 75, had a reputation of having a "personal interest" in youth ministry, according to a 1998 archdiocesan memo detailing his history. He served as an assistant director of Catholic Scouting and an associate director of the Archdiocese Council of Catholic Youth. He had served at six parishes in 25 years before the archdiocese first learned in July 1990 of possible abuse, according to the documents, when a father contacted St. Jude the Apostle Parish in South Holland, saying his son was molested by Maday two years prior. According to a July memo, Fr. Jack Powers, the pastor, said he and an associate priest "have been somewhat suspicious of Fr. Maday's behavior with boys. Fr. Norb always is joking around with the kids. He often has kids in his room -- mostly boys."

The documents indicated no action until March 1992, when the archdiocese removed Maday from ministry and placed him on administrative leave following an Illinois State Police investigation of a report of sexual abuse.

The criminal investigation pertained to a 1986 five-day trip at a youth retreat center in Oshkosh, Wis., where two boys reported separately that Maday had fondled them, and one of them said Maday threatened to kill the boy's brother if he told anyone of the incident. According to the 1998 memo on Maday's history, "The Archdiocese learned of the incidents giving rise to the conviction in late 1991 or early 1992."

In between the criminal investigation and trial, church officials urged Maday to not wear his collar, to avoid media contact and to keep a low profile.

"We are always afraid that if your name appears in a bulletin or in a newspaper that it might trigger someone else, out of anger or whatever, to come forward to bring an accusation," Fr. Patrick O'Malley, vicar for priests, wrote in an April 8, 1992, letter.

In June 1994, Maday was convicted in Wisconsin of three counts of sexual assault and one count of intimidation of a witness, and was sentenced to 20 years in prison. He did not testify in his own defense. While Bernardin notified Maday in July 1992 that a canonical process would follow the conclusion of his civil court case, the cardinal in 1996 decided not to seek Maday's dismissal from the clerical state, saying, "I do not judge that justice and equity would be served by so severe a sanction.

"You have suffered enough by your present deprivation of ministry and your incarceration. On the other hand, because of your conviction and imprisonment, I cannot guarantee any public ministry for you in the future," Bernardin wrote.

Four years later, archdiocesan attention turned toward lessening Maday's sentence. A letter to Maday in January 2000 from George, who became archbishop in 1997, set off a string of similar correspondence:

March 6, 2000: "As you know, we are trying in Wisconsin to make some definite efforts to have a sentence reduction in your case. Hopefully, some good souls will see that the six years of incarceration you have already endured are enough to satisfy the state and any sense of justice."

April 24, 2001: "In this season of hope, I send you Easter blessings. I pray often for your early release."

Feb. 4, 2002: "We have tried, as you know, a number of avenues to see if your sentence might be reduced or parole be given early. So far, we have not had any success, but we'll keep trying and I personally hope that you will not lose hope."

In the meantime, other church officials worked with Maday's legal representatives to attain what George prayed for. By 1999, the archdiocese had begun exploring early release options, outlining the parameters of a monitoring program, and considering arguments to justify the release -- from emphasizing his "deteriorating physically and psychologically" (the latter accentuating the prior) to illustrating that "Because he is a priest he is prone to be the object of violence."

Several archdiocesan officials wrote letters to the parole board on his behalf ahead of a December 2000 clemency hearing.

"He now is a person who accepts the responsibility of his actions. He is much more realistic about the behavior that has brought him to the present condition," wrote Auxiliary Bishop Edwin Conway, who said he had known Maday for more than 60 years.

"During his prison time Norbert Maday has changed dramatically. ... Slowly, he began to admit his problems in development and his boundary violation as a professional and a priest," said Fr. Daniel Coughlin, vicar for priests. "... I fear that if he is to stay in prison much longer he may begin to deteriorate because his perspective on life will become more limited and narcissistic."

At the hearing in Madison, Wis., with Maday participating by phone, the priest admitted, for the first time publicly according to his lawyer, that he had sexually assaulted the boys. Still, he did not receive his early release. In the years that followed, the archdiocese continued to receive a steady flow of accusations of sexual abuse against Maday. Nearly three dozen pages in the 500-page Maday file document allegations against him (with at least 19 deemed reasonable cause to suspect by the Professional Fitness Review Board), one received by the professional responsibility administrator in Nov. 17, 1993, but not formalized by the review board until June 6, 2006.

By May 2003 the review board had recommended Maday be laicized, but it would take another four years for George to heed the request. In a February 2007 decree, George, on the basis of information the review board determined "at least seems to be true," announced a formal investigation into the priest. In April that year, Fr. Edward Grace, vicar for priests, informed Maday the archdiocese could no longer provide him residence upon his release from prison because it couldn't properly monitor him.

"Frankly, the discussions have also focused, with growing concern, on your apparent lack of acceptance of the reality and seriousness of the crime of which you have been convicted," he wrote.

Days later, George wrote the parole chair, saying that the archdiocese's May 1999 offer to house Maday no longer stood.

"The situation has changed," he wrote. "Given the manner in which Norbert Maday has addressed his incarceration and the comprehensive program of monitoring that society would now reasonably demand, the Archdiocese of Chicago is not capable of receiving him back into our system."

George indicated he would shortly contact Rome to request Maday's dismissal from the priesthood, saying, "The position of a Catholic priest is a position of public trust, not just for Catholics but for all people. To have him present in the midst of the Archdiocese as a priest, even though permanently withdrawn from public ministry, undermines the credibility and ministry of all priests."

Maday was laicized in December 2007. He moved to a mental health facility in 2012 when he was declared a sex offender. He was released from the facility last summer and lives in Oshkosh.