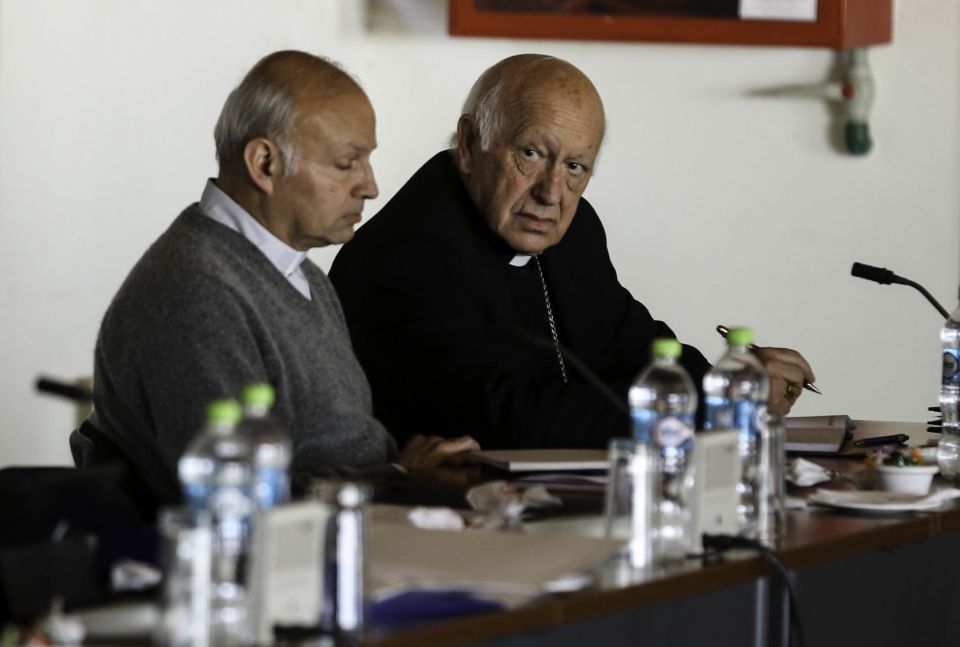 Archbishop Ignacio Ducasse Medina of Antofagasta, Chile, and Cardinal Ricardo Ezzati of Santiago, attend a meeting July 30 in Punta de Tralca on the sexual abuse scandal in the Chilean church. The July 30 – Aug. 3 meeting was organized to examine the causes of the ongoing abuse crisis and to establish national guidelines for dioceses on how to handle abuse cases. (CNS/EPA/Alberto Valdes)

Vatican City — At a court hearing to answer to allegations of covering up sexual abuse by members of the clergy, Chilean Cardinal Ricardo Ezzati invoked his right against self-incrimination.

In a statement released by the Archdiocese of Santiago Oct. 3, Ezzati said that at the suggestion of his lawyers, "I will use, for the time being, my right to remain silent" until authorities "issue a ruling on the request for a definitive dismissal" of the charges against him.

The Chilean prosecutor's office in Rancagua, led by Emiliano Arias, issued a subpoena July 24 after conducting several raids of diocesan offices in Rancagua and Santiago.

Arias confirmed his office was investigating an alleged sex-abuse ring in Rancagua as well as possible cover-ups of abuse cases by senior members of the clergy, including Ezzati and his predecessor, Cardinal Francisco Javier Errazuriz.

The subpoena is believed to be related to the case of Fr. Oscar Munoz Toledo, the former chancellor of the Archdiocese of Santiago, who was arrested July 12 following allegations that he abused seven minors in Santiago and Rancagua since 2002.

Although Ezzati had said that he would cooperate with authorities in their investigation, his decision to remain silent caused outrage among survivors of clergy sexual abuse in the country.

Juan Carlos Cruz, who along with James Hamilton and Jose Andres Murillo met with Pope Francis in May to discuss their suffering, said the cardinal's use of his right against self-incrimination "was a lack of respect" for survivors.

"He has the right to do so, but it is a new affront to victims and to the state," Cruz tweeted Oct. 3.

Hamilton also tweeted shortly after that saying that Ezzati is "laughing at Chile," a country that "welcomed him and gave him citizenship." The cardinal was born in Italy and immigrated to Chile at the age of 17.

"The least he could do was cooperate with" authorities," Hamilton tweeted. "How much more must we tolerate?"