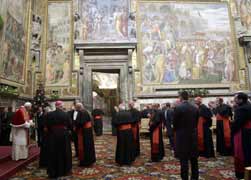 Pope Benedict XVI delivers a speech Dec. 21 during his annual pre-Christmas meeting with the Roman Curia and cardinals who reside in Rome. During the meeting, the pope said the church must repent and repair the damage caused by clerical abuse. (CNS photo /L'Osservatore Romano via Reuters)

VATICAN CITY -- In response to the "unimaginable" scandal of clerical sex abuse against minors, the church must reflect, repent, and do everything possible to rectify the injustices suffered by victims as it works to prevent such abuse from ever happening again, said Pope Benedict XVI.

The pope said he and others were "dismayed" when, during a year dedicated to the world's priests, further cases of clerical sex abuse came to light "to a degree we could not have imagined."

"We must accept this humiliation as an exhortation to truth and a call to renewal. Only the truth saves," the pope said Dec. 20 in his annual pre-Christmas address to the Roman Curia and cardinals who reside in Rome.

In his seven-page reflection on the past year, the pope dedicated a large part of his speech to the impact of sex abuse by priests.

Benedict said priests who committed such scandals "twist" the sacrament of ordination into its "antithesis" when they, "under the mantle of the sacred, profoundly wound human persons in their childhood, damaging them for a whole lifetime."

The face of the church is soiled and her clothes torn "because of the sins of priests," the pope said, referring to the writings of the 12th-century German mystic, St. Hildegard of Bingen, who had visions of a church wounded and sullied because of abuses by clergy evident in her day.

"We are well aware of the particular gravity of this sin committed by priests and of our corresponding responsibility," the pope said.

He listed a number of "musts" that the church needs to attend to.

The church must find "a new resoluteness in faith and doing good," it must be capable of penance, and it must strive to do everything possible in preparing future priests "to prevent anything of the kind from happening again," he said.

Amid the "great tribulations" the church has faced during the last year, he said, the Advent prayer, "Stir up your power, O Lord, and come that you may save us," often has been "on my mind and on my lips."

Rather than beg Christ to wake up and deliver his disciples from a storm, it is the disciples themselves who must reawaken their own faith that has "grown tired," the pope said.

He said what needs to be restored is a faith that has "the power to move mountains, that is, to order justly the affairs of the world."

As the church works to address the sex abuse crisis within its own walls, it must also tackle the larger problems of child pornography and child sex tourism in society, the pope said.

"The psychological destruction of children, in which human persons are reduced to articles of merchandise, is a terrifying sign of the times," he said, as he lamented how child pornography is considered "more and more normal by society."

Insatiable desire and "the excess of deceiving intoxication becomes a violence that tears whole regions apart, and all this in the name of a fatal misunderstanding of freedom which actually undermines human freedom and ultimately destroys it," he said.

The pope called on pastoral leaders to renew "the great rational tradition of Christian ethos" and to replace the modern day notion of relative or pragmatic morality with "the essential and permanent foundations of moral actions."

In his address, the pope also spoke about the Synod of Bishops for the Middle East in October and lamented that "Christians are the most oppressed and tormented minority" in the region.

"The tradition of peaceful coexistence has been shattered and tensions and divisions have grown" in many parts of the region, he said.

He expressed his gratitude for "voices of reason" such as Muslim leaders who speak up against violence against Christians. However, those voices "are too weak," he said, and Christians are "up against an unholy alliance between greed for profit and ideological blindness."

The pope urged all political and religious leaders to put an end to "Christianophobia" and to defend refugees and those who suffer as well as revitalize the spirit of dialogue and reconciliation.

Finally, the pope offered a reflection on his trip in September to the United Kingdom and the beatification of Cardinal John Henry Newman.

Blessed Newman's spiritual conversion is an important model of "a path of obedience to the truth" that gradually opens up to a person, the pope said. It is a path of conscience, which is the human capacity to recognize the truth, and therefore seek it out and freely submit to it, he said.

Underlining the human capacity for objective truth is imperative in a world that is "troubled by the sense that moral consensus is collapsing, consensus without which juridical and political structures cannot function," he said.

The pope took note of French political philosopher Alexis de Tocqueville's observations of 19th-century America and how democracy there "had become possible and had worked because there existed a fundamental moral consensus, which transcending individual denominations, united everyone."

Before the pope's address, Cardinal Angelo Sodano, dean of the College of Cardinals, told the pope that the cardinals had begun a collection during the November consistory to aid the poor and sick in Haiti and Iraq.

Two sums of $100,000 each were being sent to Haiti and Iraq via the church's apostolic nuncios and would be distributed to Catholic organizations on the ground.