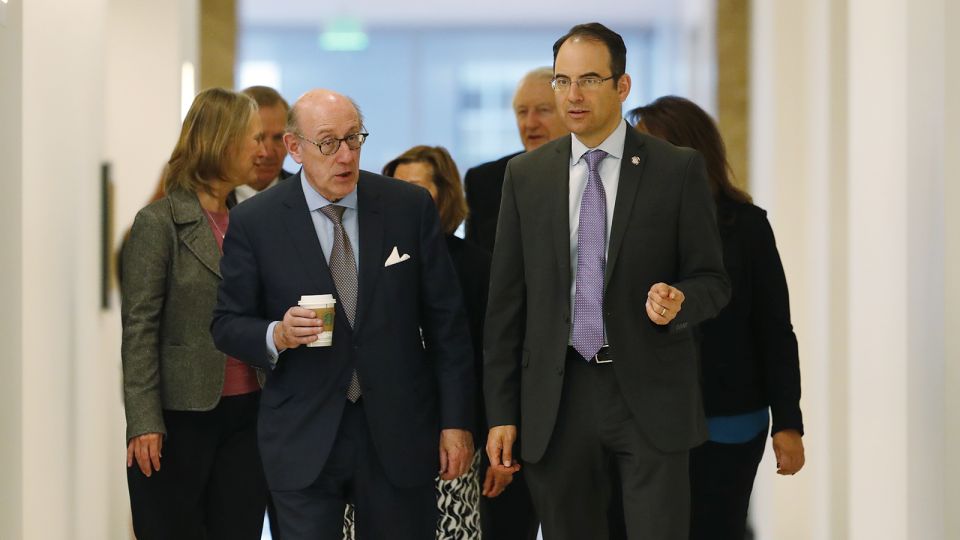 Kenneth Feinberg, front left, who is leading a program to compensate people who were abused by Catholic priests in Colorado, confers with state Attorney General Phil Weiser as they and members of an investigatory committee head into a news conference to announce that the program is now open for the submission of claims on Oct. 7, 2019, in Denver. Administrators said they were sending out packets to 65 people who previously reported abuse to the church to ask if they would like to submit a claim against the three archdioceses — Denver, Colorado Springs and Pueblo. (AP/David Zalubowski)

Colorado Attorney General Phil Weiser has unveiled a new independent report detailing allegations of sex abuse against at least 166 children by 43 Roman Catholic priests over the course of 70 years.

Weiser announced the more than 250-page report during a news conference on Wednesday (Oct. 23), describing the documented abuse of children by Catholic priests going back decades as "unimaginable."

"The most painful part for me is that we have had stories told of victims coming forward, and they weren't supported," Weiser told reporters in Denver. "We can't make up for that. What we can do is build a culture that going forward, when people come forward and tell their stories, they are supported."

Weiser also made mention of a new reparations program for victims, which will be funded by dioceses and orchestrated by Kenneth Feinberg.

The report states that 97 of the victims were sexually abused "after the Colorado Dioceses were on notice that the priests were child sex abusers."

According to investigators, no Colorado priests credibly accused of sexually abusing children are currently serving in ministry. Even so, the report warns, "We also know we cannot be positive there are none."

The report is the latest in a series of local, state and federal investigations into Catholic sex abuse over the past year. Most were launched after Pennsylvania Attorney General Josh Shapiro unveiled a bombshell report from a specially empaneled grand jury in August 2018 that detailed allegations of abuse against 1,000 children by Catholic priests in the state over 70 years.

Weiser told reporters that his department's involvement with the investigation began after Colorado officials noticed that one of the priests named in Pennsylvania's grand jury report had been transferred to Colorado. He said he appreciated how Catholic officials in Colorado cooperated with investigators, adding they were "willing to take recommendations that were significant."

The Colorado attorney general noted that the investigation did not "come from government" or through a grand jury as it did in Pennsylvania. Instead, it was developed after the Catholic Church in the state "came forward" to work with the attorney general and negotiate for a third-party investigation overseen by former United States Attorney Robert Troyer.

"We in Colorado don't have the same authority that Pennsylvania does," Weiser said.

In a statement, Denver Archbishop Samuel J. Aquila praised the report and the process that led to its creation.

"We should all be comforted that this investigation spanned seven decades, has been thorough and is transparent," said the archbishop. "I promised without reservation that I would openly share (Troyer's) report and adopt his recommendations. I honor that promise today."

Pueblo Bishop Stephen Berg also responded to the report with a letter in which he apologized "for the pain and hurt that this abuse has caused, and for anytime the Church's leaders failed to prevent it from happening."

Bishop Michael Sheridan of Colorado Springs expressed confidence that he and other Catholic leaders would incorporate suggestions made in the report to better protect minors from abuse.

"I and my staff were honored to work with Mr. Troyer in an effort to identify and exhume our past misdeeds, and we commit to making meaningful improvement to better protect every child," he said.

The Survivors Network of those Abused by Priests, a group that advocates for abuse victims, responded to the report with a call for legislation that would further aid victims.

"We hope that this report will now compel legislators in Colorado to take steps to institute legislative reform that can help prevent future cases of abuse and support survivors, such as reforming the statute of limitations laws that often bar survivors from bringing claims forward and exposing abusers and their enablers," read a SNAP statement.

"At the same time, we doubt that these numbers represent the full scope of abuse in the state, especially given the revelations that church officials only reported abusers less than 10 times since 1950."

The SNAP statement also pointed out that the investigation — which only found one allegation of abuse listed as "arguably" still viable for prosecution within the existing statute of limitations — was based on files that were voluntarily handed over to investigators. This is distinct from similar investigations in other states such as Pennsylvania or New Jersey, where law enforcement has more direct access to personnel files.

SNAP officials expressed skepticism about the Denver Archdiocese's claim that Troyer was granted "access to 70 years of diocesan files concerning the sexual abuse of minors by diocesan priests — including the so-called 'secret archive' files."

"We have no confidence that A.G. Weiser's office was granted full access to all files and personnel records," the SNAP statement read.

Of the 91 dioceses that responded to a Religion News Service survey last year, 21 said their files had already been inspected by authorities, either during an investigation or during bankruptcy proceedings sometimes related to settlements of child abuse cases. No Colorado diocese responded to the survey.