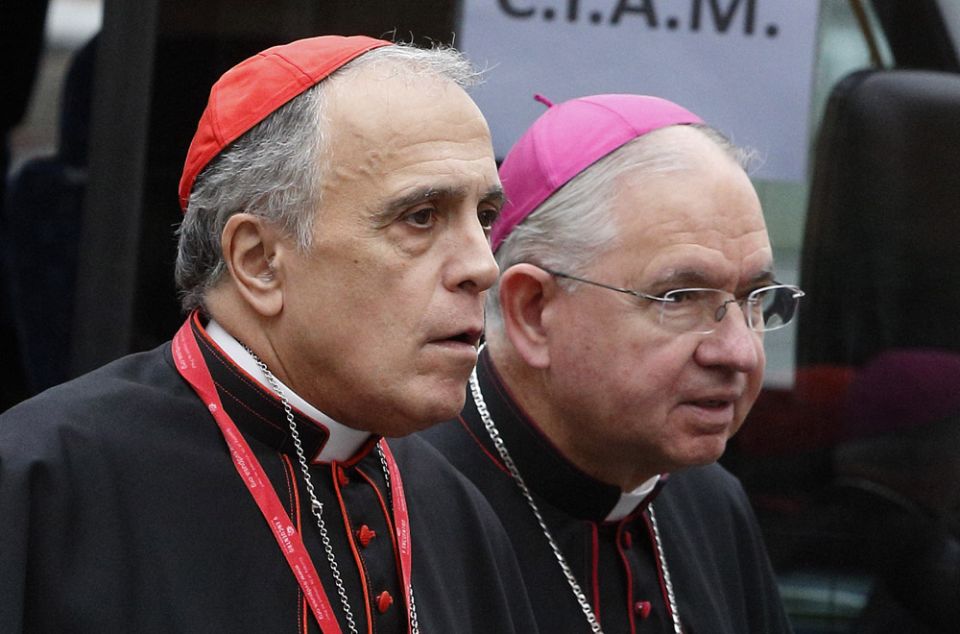 Cardinal Daniel DiNardo of Galveston-Houston, president of the U.S. bishops' conference, and Archbishop Jose Gomez of Los Angeles, vice president, arrive for a session of the Synod of Bishops at the Vatican Oct 5. (CNS/Paul Haring)

Fort Dodge, Iowa — The Diocese of Sioux City admitted Oct. 31 that it had concealed for decades the identity of a priest who had abused dozens of Iowa boys, as reported by the Associated Press. One of the bishops during that period was Daniel DiNardo, now cardinal archbishop of Galveston-Houston and president of the U.S. Conference of Catholic Bishops.

The Associated Press obtained a Feb. 12 letter written by the diocese vicar general. According to the letter, AP reports that "in 1986, Coyle reported his 'history of sexual attraction to and contact with boys' to Sioux City's bishop, revealing that he had victimized approximately 50 youths over a 20-year period while serving in several Iowa parishes."

Bishop R. Walker Nickless of the Diocese of Sioux City, Iowa, acknowledged Oct. 31, in answer to an Associated Press inquiry, that "police were not contacted when Coyle self-admitted, but policies have changed since 1986."

The supervisors of Coyle, now 85 years old, included DiNardo, who served as bishop in Sioux City from 1998 to 2004. DiNardo, as president of the conference, has been a leading voice in the response to this year's sex abuse revelations, including a Pennsylvania grand jury report and charges of harassment and abuse of minors by former cardinal Theodore McCarrick of Washington.

The Sioux City case became public as the bishops prepared to gather for their annual meeting in Baltimore Nov. 12-14, during which a response to the sex abuse crisis will be on the agenda.

DiNardo became the archbishop of Galveston-Houston in 2006, after being named coadjutor there in 2004. He was named a cardinal in 2007. DiNardo has urged the church to come forward with full transparency about the crisis.

NCR sent three separate inquiries to the Archdiocese of Galveston-Houston, the first by email on Nov. 1, asking for comment on the Coyle case. A return email said the office was closed for All Saints' Day but that a response would be forthcoming the following day. No one had responded by the time this story was published. NCR asked in that email if DiNardo knew about the case when he was bishop of Sioux City and, if so, why he didn't inform the public about a sexual predator.

"The truth will ensure the terrible sins of the past are not repeated. The courage of abuse survivors who first brought the horrific truth of sexual abuse to light must continue to be matched by our courage as pastors to respond in justice," DiNardo said after meeting with Pope Francis in the Vatican in October.

While he was in Sioux City, DiNardo apologized in 2002 for permitting Fr. George McFadden, a priest accused in 27 lawsuits of abuse, of being allowed to celebrate Mass at the diocesan cathedral despite being removed from ministry.

DiNardo declined to respond to a case this year involving a priest in the Archdiocese of Galveston-Houston arrested on sex abuse charges.

Fr. Manuel LaRosa-Lopez was arrested Sept. 11 in Conroe, Texas, for fondling two teenagers when he served at Sacred Heart Catholic Church there. He was charged with four counts of indecency with a child. The charges date back to 2001. The two accusers are now in their thirties, the Associated Press reported.

At the time of his arrest, LaRosa-Lopez was pastor at St. John Fisher Catholic Church in Richmond, Texas, and the archdiocese's episcopal vicar for Hispanics.

According to the Associated Press, Coyle's sexual abuse took place over 20 years of service of parish ministry in the Diocese of Sioux City. He was removed from ministry in 1986 by then Bishop Lawrence Soens, and was sent to the Servants of the Paraclete treatment center in New Mexico.

According to the diocese, Coyle was told at that time not to represent himself as a priest. Still the diocese never informed the public or the police that Coyle was an accused sex abuser. Nickless' statement said that the diocese has never heard of further charges against the priest since he was sent to New Mexico. Coyle was never formally defrocked and continued to receive financial compensation from the diocese, according to AP.

Soens, now 92 years old and retired since 1998, was himself accused of sexually molesting students when he was a principal at Regina High School in Iowa City. He was named bishop of Sioux City in 1983.

Coyle was released from the Paraclete treatment center and lived in Albuquerque, New Mexico, for decades. He identified himself as a priest to Reuben and Tania Ortiz, a New Mexico couple with three teenage children who he befriended, according to AP. He lived with the family after a car accident last year.

After Reuben Ortiz was warned by the diocese about Coyle's background, the priest was sent to live earlier this year at the Marian House in Fort Dodge, Iowa, a retirement facility. That center is next to a Catholic school.

"This is not permanent, and he will not remain there," Nickless said.

"No one presently at the diocese has firsthand knowledge about Jerry Coyle and that includes me," Nickless, the current bishop of Sioux City, wrote in his Oct. 31 letter.

French cardinal to be acquitted of covering sex abuses in Lyon