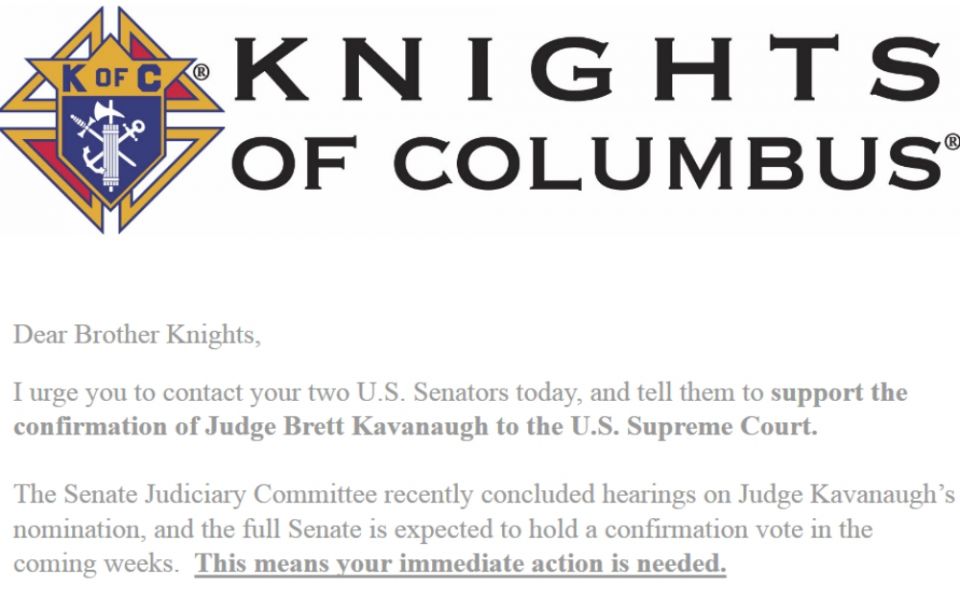 A screenshot of the opening to Carl Anderson's email urging fellow Knights of Columbus to contact their senators to support the Supreme Court nomination of Brett Kavanaugh.

Michael Gerson's voice is the voice of serious and responsibly Christian conservatism. There is no decade in the life of this nation when that voice has not been needed, even if it is sometimes blinkered. His latest commentary on the state of the evangelical churches is sobering and sad but precisely on target.

What to say about Supreme Knight Carl Anderson? Once a political hack, always a political hack. His letter to his brother Knights of Columbus urging them to contact their senators to support the nomination of Brett Kavanaugh violates the spirit, if not the letter, of the laws restricting the political involvement of nonprofit charitable organizations. It certainly violates the bylaws of the Knights, which bar "issuing appeals for, or soliciting by virtue of his membership in the Knights of Columbus, aid, or assistance or support by or in behalf or announcing candidates for public office" (Chapter XVIII, "Misconduct and Nonfeasance of Members and Officers," Section 162.23, "Appeals for Political Support," of the Charter Constitution Laws of the Knights of Columbus).

Speaking of character, at Working Class Perspectives blog, Jack Metzgar reviews a new book, Negotiating Opportunities by Jessica McCrory Calarco, on how middle-class students and their parents secure advantages for their children through advocacy for those kids, while working-class families tend to exhibit more deference. Sad and fascinating.

From the file "right-wing hypocrites," a new entry that really takes the cake. Fr. John Zuhlsdorf has been hyperventilating about Theodore McCarrick all summer, trafficking in the crude attacks on Pope Francis from LifeSiteNews et al. But this past weekend, he attended the consecration of a new abbey church in Missouri in which the pre-1961 rite was used. He posted photos and captions one "Bp. Johnston of Kansas City-St. Joseph watches as four priests bring the relics to the church." But, he does not mention that the bishop presiding over the service itself is not Bishop James Johnston, but his predecessor Bishop Robert Finn. You remember, the guy who was sacked by Pope Francis after being found guilty of criminal negligence regarding the protection of children. But just as Tim Busch can hire disgraced Archbishop John Nienstedt as a kind of house chaplain for his Napa Institute, but then think he is the layman to lead the reform effort, Zuhlsdorf, whose idea of reform involves lots of lace and Latin, can overlook the participation of a bishop sacked for failing to protect children because that bishop took the time to learn how to do a pre-1961 rite that lasted seven hours. Got it.

I am having a hard time figuring out what Bishop Robert Barron is up to. He announced the formation of a "Word on Fire Institute" in a video but also calls it "a movement." He has hired a new executive director, Jared Zimmerer, who made his appearance in a subsequent video explaining the first of eight principles that will guide the movement. I am all for Christocentrism but, interestingly, not one of the eight principles mentions the poor. Perhaps this is because at a recent Word on Fire conference for priests, Barron was introduced by none other than Tim Busch, who helped sponsor the event. The hire of Zimmerer is a clear ploy to perk the interest of prelates who, perhaps not coincidentally, are headlining Busch's "Authentic Reform" meeting in Washington next month.

And we RCs think we have a clericalism problem? Look at the tennis umpires who are shocked that Serena Williams decided to stand up for herself and point out the hypocrisy of last week's foul against her for coaching. I hope Serena mops the floor with these entitled umps.

My entry for best evangelizing video goes to "There Is No White Jesus," which was sent to me by a kind pastor. Now, this is splendid. I had almost said "on a lighter side" but figured that might be racist.

There Is No White Jesus | Famalam

NCR Podcast: Why systemic racism is a pro-life issue