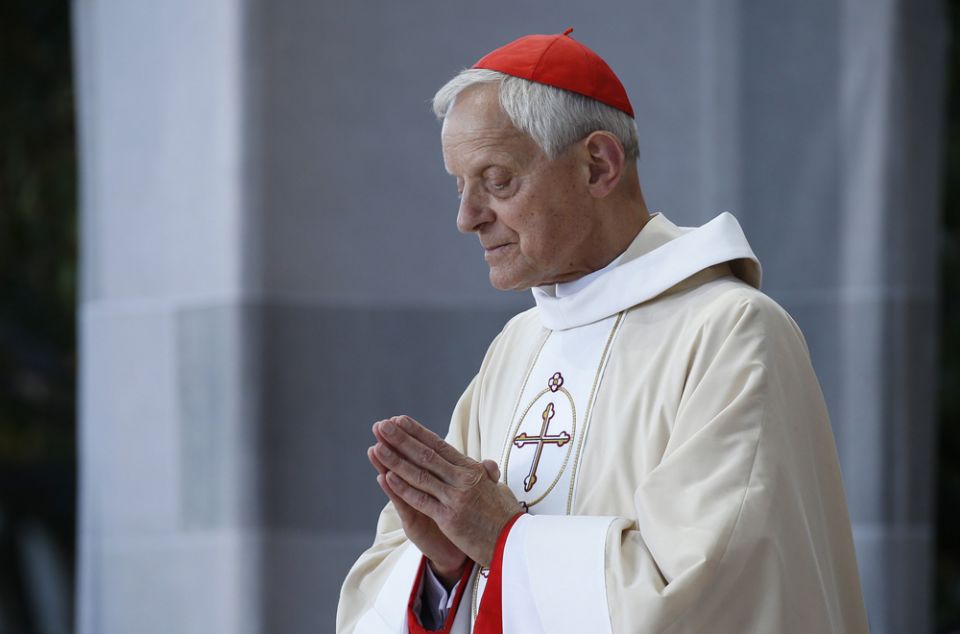 "Antistite nostro Donaldo." For more than 10 years, from the time of his installation as Archbishop of Washington in 2006, until my moving out of the archdiocese in 2017, every Sunday at Mass, I softly repeated these words as the priest said them in the Roman Canon. "For our bishop Donald," I prayed them on the days I could not borrow a car to get to the 10 a.m. Latin Mass at St. Matthew's and I had to walk to the suburban church near my house. Over that time, those words went from something rote and obligatory to something personal and powerful, though still obligatory. We Catholics pray for our pope and our bishop at every Mass. The Communion at the altar is intrinsically related to the communion of persons that is the church, indeed they are two faces of the same reality, the Body of Christ.

Today, the Body of Christ in the United States is bruised and bloodied. The depredations of former-cardinal Theodore McCarrick and the grim and gruesome details of clergy sex abuse revealed in the Pennsylvania grand jury report both conspired to place the abuse of children by clergy back at the center of the church's consciousness and public image. Cardinal Donald Wuerl was a link between the two scandals, having succeeded McCarrick in Washington in 2006 and been a bishop in Pennsylvania for 18 years.

It did not matter that Wuerl was one of the first bishops to meet with victims and their families, despite being advised by lawyers not to do so. It didn't matter that he introduced policies, such as mandatory reporting to police, a decade before the 2002 Dallas Charter for the Protection of Children made such policies the law for all bishops. It did not matter that he was one of the leaders in Dallas who fought back against efforts at ameliorating the "zero tolerance" policy which many, many priests found offensive and unfair. It did not matter that the grand jury report was spotty and inconsistent. It did not matter that unscrupulous columnists and commentators conflated stories and elided details, all of them unable to answer the core problem with the report: Why, if Wuerl was willing to risk his career fighting powerful Vatican forces to remove pedophile Fr. Anthony Cipolla from ministry, was he being portrayed by news accounts as indifferent to the suffering of child victims at the same time? It didn't matter that fringe and dangerous groups like Church Militant were calling for Wuerl's resignation before the grand jury report came out. None of that mattered. He has been hounded from office because he became the face of the crisis.

I will stipulate that Wuerl should not have reassigned a couple of bad actors — not child rapists, mind you, because these were removed from ministry immediately — but priests who had done creepy things and, no matter what the psychiatrists said, these priests should never have been allowed back into ministry. I will stipulate that Wuerl could scarcely have handled the reaction to the report in a worse way, appearing defensive instead of contrite, and saying he was made angry by the abuse but incapable of showing anger in front of a camera. Was he guilty of bad PR? Guilty as charged.

I will also stipulate that Wuerl and the other cardinals and bishops who support Pope Francis have been negligent in confronting the schismatic cancer in their midst in recent years. There will always be crackpot groups like LifeSiteNews and Church Militant, but the bishops should have insisted that the National Catholic Register and EWTN isolate those groups, not make the wall between them porous, not indulge them, not adopt their interpretative lens. When the dossier of Archbishop Carlo Maria Viganó came out at the Register, with a translation from someone at LifeSiteNews, the connections were there for all to see. I am astounded that the CEO of EWTN and Register publisher, Michael Warsaw, is still an official consultant to the Vatican dicastery on communications. His media outlets are, as Cameroon Doody explained at Religion Digital, part of an organized effort to attack Pope Francis, all of it driven by "dinero sucio" (dirty money).

I am astounded that the university the bishops own hosted a conference this month with conservative Catholic zillionaire Tim Busch's Napa Institute despite the fact that Busch has himself disclosed he spoke with Viganó two weeks before the release of his dossier. Busch did not indicate he tried to dissuade the ex-nuncio from violating years' worth of confidences. I am astounded that the National Shrine and Wuerl's own cathedral hosted Masses associated with this conference. Our bishops, including Wuerl, find themselves in a knife fight and they are too worried about getting blood on their cufflinks. They are now late to the fight, but they must prepare themselves quickly because Wuerl's resignation will embolden these most malignant forces in the church. Today, I imagine the Church Militant crowd and the Napa Institute crowd are popping champagne and toasting their victory. The image makes me ill.

Cardinal Wuerl was not someone I thought I would come to like when he came to Washington in 2006. I knew he had been a voice of sanity within the conference, but I did not yet realize what a rarity that was becoming in the conference. He was very formal, even stiff, starched. His sermons when he came to the cathedral were precise not passionate. I heard the jokes from friends in Pittsburgh: "Remember, he is German. The meat and the vegetables on his plate have never touched." But, unlike his predecessor, there was nothing glib or worldly about the man: He was serious and sincere, with the reputation of a hands-on manager, and, as I came to realize, there was beneath that formality a pastor's heart and a thorough-going appropriation of what the Second Vatican Council said about the role of bishops. Wuerl did not see his weekend visits to parishes as the "pastoral" part of his job, in contrast to the desk job Monday through Friday. The decisions he made at the desk, these too were exercises in pastoral ministry. I came to understand there was a kindness inside his avoidance of the culture warriors, just as there was a serious theological mind inside his aversion to a kind of goofy and uncritical embrace of Vatican II's spirit.

Read this next: At 'Authentic Reform,' conservative Catholics rally to 'fix' church failures

Cardinal Wuerl is the last of his kind. He was ordained in 1966, so his entire seminary formation happened before or during Vatican II. He is a churchman, not an ideologue, a gentleman, not a bomb-thrower. He seems terribly out of place in the Washington of Donald Trump: Wuerl would rather receive a thousand unjust insults than return one of his own. He has been for 30 years a force of nature in the Catholic Church in this country, a workhorse for the conference and for the Vatican and for the dioceses he served. As I got to know him — not well, but enough to speak candidly with one another, and enough to consider him a friend, and enough to find myself crying when I received the news of his resignation — I came to realize Donald Wuerl is also a force of supernature, a man of grace in every sense of the word. I live in a different diocese now. Soon, Washington will get a new archbishop. But, during the Roman Canon, I will still whisper to myself, "antistite nostro Donaldo," and be grateful for the service to the church and the nation that he gave so intelligently and so faithfully.