Dublin abuse report asks: 'When is a lie not a lie?' 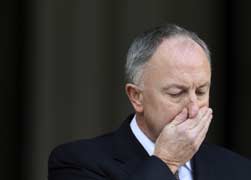 Dermot Ahern, Ireland's minister for justice, equality and law reform, pauses as he addresses the media Nov. 26 after the release of a report detailing failures of church leaders' handling of sex abuse cases in the Archdiocese of Dublin. The report has r esulted in calls for bishops' resignations and further investigations and prosecution. (CNS photo/Cathal McNaughton, Reuters)

In addition to exposing how child abuse was concealed and perpetuated in the Dublin Archdiocese, a recent report raises questions about Catholic moral teaching on the Eighth Commandment and mental reservations.

The report of the independent Commission of Investigation, headed by Judge Yvonne Murphy, said a mental reservation permits a church official knowingly to convey a misleading impression to another person without being guilty of lying.

The report on how allegations of clerical child abuse were handled in the Dublin Archdiocese gave the following example: "John calls (on) the parish priest to make a complaint about the behavior of one of his curates. The parish priest sees him coming but does not want to see him because he considers John to be a troublemaker. He sends another of his curates to answer the door. John asks the curate if the parish priest is in. The curate replies that he is not. This is clearly untrue but in the church's view it is not a lie, because, when the curate told John that the parish priest was not in, he mentally reserved to himself the words 'to you,'" the report said.

In his evidence to the commission, Cardinal Desmond Connell, who served as archbishop of Dublin 1988-2004, explained. the concept: "The general teaching about mental reservation is that you are not permitted to tell a lie. On the other hand, you may be put in a position where you have to answer, and there may be circumstances in which you can use an ambiguous expression realizing that the person who you are talking to will accept an untrue version of whatever it may be ...."

"It really is a matter of trying to deal with extraordinarily difficult matters that may arise in social relations where people may ask questions that you simply cannot answer," he told the commission. "Everybody knows that this kind of thing is liable to happen. So, mental reservation is, in a sense, a way of answering without lying."

Andrew Madden and Marie Collins, two abuse victims who campaigned for the Commission of Inquiry to be established, told the commission how mental reservations were used in their cases.

Madden was the first Irish clerical abuse survivor to go public. In 1995 he said the Dublin Archdiocese had paid him compensation for being abused by Father Ivan Payne and that the priest was still in parish ministry and in contact with children.

The Murphy Report, as the commission's report has become known, said that during a meeting in 2003, Cardinal Connell apologized for his handling of the Father Payne case.

In Collins' case, after her abuser was convicted in 1997, the archdiocese issued a press statement claiming that it had cooperated with police in relation to her complaint, a claim that upset her deeply.

The report said a friend of Collins, Father James Norman, told police that he asked the archdiocese about the statement and the explanation he received was that "we never said we cooperated 'fully," placing emphasis on the word 'fully.'"

"The American phrase, 'don't ask, don't tell' is appropriate to describe the attitude of the Dublin Archdiocese to clerical sex abuse for most of the period covered," the report said. "The problem as a whole never seems to have been discussed openly by the archbishop and his auxiliaries, at least until the 1990s. Complainants were told as little as possible. The note 'Gain his knowledge, tell him nothing' for dealing with complainants and witnesses, typifies the attitudes of the archdiocese."

Under the heading "Cover-up," the report said: "As can be seen clearly from the case histories, there is no doubt that the reaction of church authorities to reports of clerical child sexual abuse, in the early years of the commission's remit, was to ensure that as few people as possible knew of the individual priest's problem. There was little or no concern for the welfare of the abused child or for the welfare of other children who might come into contact with the priest. Complainants were often met with denial, arrogance and cover-up and with incompetence and incomprehension in some cases."

Accountability | Dublin abuse report asks: 'When is a lie not a lie?'