Editorial: In DC Archdiocese, the truth is a good starting point 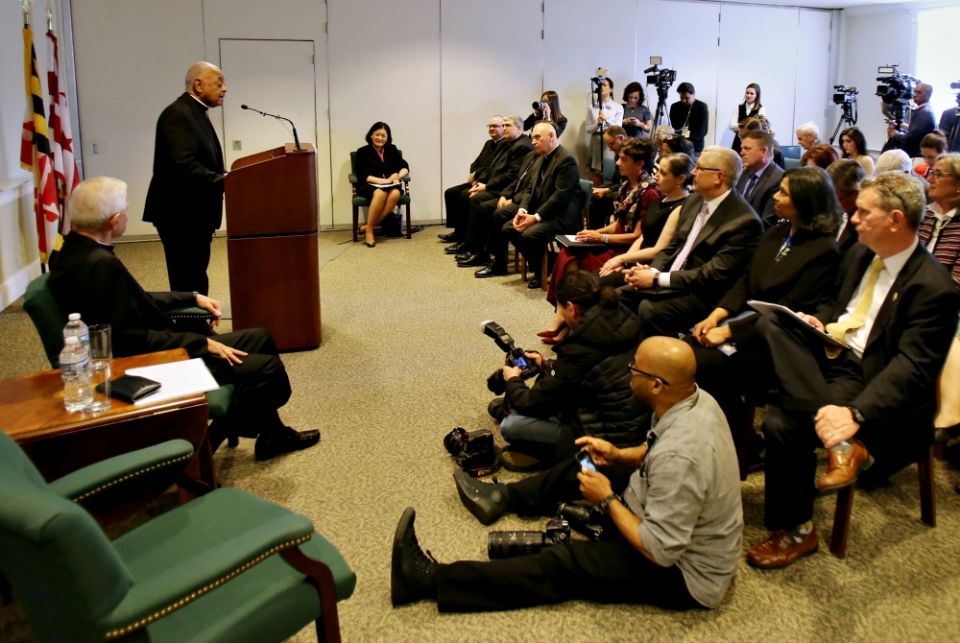 Archbishop Wilton Gregory speaks during a news conference in the pastoral center of the Washington Archdiocese April 4 after Pope Francis named him to head the archdiocese. Seated at left, Cardinal Donald Wuerl, retired archbishop of Washington, who has served as apostolic administrator of the archdiocese, looks on. (CNS/Bob Roller)

"I will always tell you the truth," said Wilton Gregory during his introductory news conference as newly appointed archbishop of Washington, D.C. "I believe the only way I can serve the local archdiocese is by telling you the truth."

Telling the truth would seem a minimum requirement for the leader of one of the most important archdioceses in the world. But Gregory seemed to be admitting that he had to place that marker clearly before his new flock, emphatically, because Catholics have come to associate the episcopal culture with deceit and cover-up.

The 71-year-old Gregory, who will be the first African American to head the Washington Archdiocese and likely the first to be named a cardinal, has already had a distinguished career. He knows he will go down in church history as the young president of the U.S. Conference of Catholic Bishops who cajoled, reasoned and otherwise managed to guide his colleagues in 2002 to their first meaningful measure of accountability for their complicity in covering up decades of horrendous crimes by thousands of priests against untold thousands of the Catholic community's children.

He is highly regarded in Atlanta, the archdiocese he's led since 2005. Most bishops his age would be looking to cement their legacy and toward submitting the retirement letter required of all bishops when they reach 75.

Instead, he's agreed to take on the substantial burden of leading a uniquely challenging archdiocese rocked by revelations during the past year that its immediate past archbishop, Donald Wuerl, improperly handled cases of abusive priests during his tenure as bishop of Pittsburgh in the 1990s. Far more disturbing were reports that Wuerl's predecessor, Theodore McCarrick, abused a youngster and sexually harassed seminarians.

Washington went from being fairly unscathed by the scandal to being at the center of it. It will be a tough end-of-career assignment.

Permit us to stipulate here the obvious: No perfect bishops exist. Gregory did not handle perfectly every situation in the long saga of the sex abuse crisis.

But Terry McKiernan, co-director of BishopAccountability.org, which has been tracking the sex abuse crisis for decades, had it right when he told The Washington Post, "I feel positive about the guy" despite his imperfections.

"He was put in the hot seat because he was president [of the U.S. bishops' conference] when everything broke, and I think he did in general an admirable job. He rode herd on bishops, many of whom were extremely reluctant to take any measures in 2002."

The questions of the moment don't fall entirely on Gregory. The rest of the community — we lay members — have to acknowledge our own complicity and imperfections in enabling and sustaining this scandal, as subtle and indirect as that involvement may have been. Have we learned, for instance, that no individual should ever turn over to another, no matter what his or her title, the amount of control we gave over to the Catholic clerical culture? Surrender of that sort is properly made to God alone.

Has it become clear that no sacramental magic exists that somehow elevates a man above the human condition? During the news conference, Gregory referred to himself as "an ordinary human being."' Believe him.

Are we willing to grow into Catholic adulthood, giving up our need for certainty as a substitute for faith? Are we willing to give up the security of pat answers and a narrowly defined Catholicism to wrestle with the complexities of the day and the signs of the times?

Can we who have been justifiably angered, disgusted and frustrated by the inept and even evil response of the hierarchy for nearly 34 years now dare the vulnerability inherent in trusting one more time?

Gregory may be an ordinary human, but he was thrust to national prominence by dint of the office he held during one of the most heated moments in the history of this awful scandal. He will end his career in an arena largely shaped by the ongoing crisis. As much as someone like McCarrick symbolizes the depths of the scandal, Gregory will come to represent whether and how the church might heal.

He has declared truth-telling central to the effort. To that end, he recalled meeting with Pope John Paul II during the explosion of the scandal in the early 2000s and telling the pope of the abuse of minors. The pope, he said, asked him if he was sure. "And I said, 'Holy Father, I am sure, and there is more.' "

He walked away from that period of leadership, he said, knowing that he had "told them the truth as I knew it."

The recollection is significant because it quite clearly sets aside the persistent trope that John Paul II was shielded by his minions from knowing the truth of the scandal. And that is an essential matter of truth for someone stepping into a situation like Washington, where truth has been so recently upended.

Pope Francis rightly chose someone in Gregory who does not come from a hot corner of the Catholic community. Gregory is a moderate, not a culture warrior. He said during his news conference that the church has "certainly given our faithful lots of reasons to leave."

It is a line — a stark admission of the damage done to the community — that would not have been spoken in the recent past by any archbishop appointed to a major see. We suspect they are words that issue from a hard-earned wisdom.

Gregory said he wants to rebuild trust and give hope, "neither forgetting the past nor being constrained by it."

We wish him well — and an abundance of grace to go with it.

A version of this story appeared in the April 19-May 2, 2019 print issue under the headline: In DC Archdiocese, the truth is a good start .

Editorial | Editorial: In DC Archdiocese, the truth is a good starting point