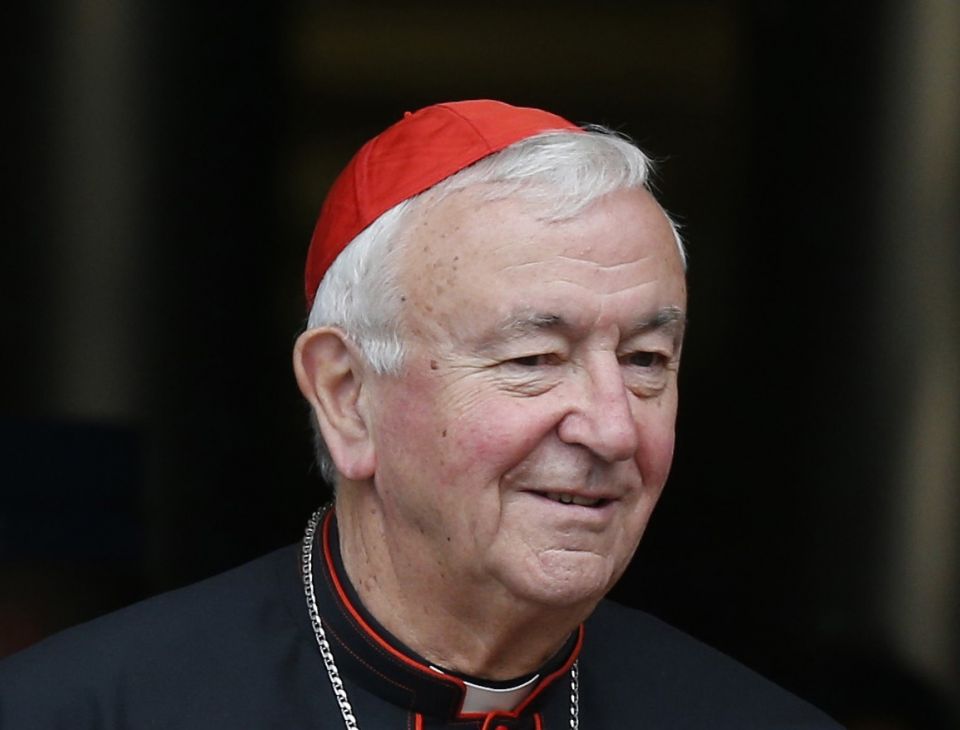 Cardinal Vincent Nichols of Westminster, England, is pictured Oct. 11 at the Vatican. Nichols told an independent Inquiry into Child Sex Abuse Dec. 13 that he was shocked to learn a now-deceased vicar in Birmingham tried to help two pedophile priests flee to United States. (CNS/Paul Haring)

London — An English cardinal has told an inquiry into child abuse of his shock at learning that a vicar general of his former archdiocese tried to help two pedophile priests escape to the United States.

The Independent Inquiry into Child Sex Abuse revealed for the first time that Msgr. Daniel Leonard, a former vicar general of the Archdiocese of Birmingham, ordered a priest to tip off Fr. Samuel Penney that he was about to be arrested and to give him cash to flee to the United States.

It also revealed that Leonard, who is now deceased, provided Fr. James Robinson with a good character reference so he could transfer to the Archdiocese of Los Angeles, even though the priest was facing allegations of child abuse in the U.K.

Giving evidence to the inquiry, Cardinal Vincent Nichols of Westminster said: "This comes as a shock to me that such a course of action could have been in the mind of the then vicar general.

"It is shocking. If I understand things correctly, it is criminal intent," said Nichols, president of the Bishops' Conference of England and Wales, at the Dec. 13 hearing in London.

The cardinal, who served as archbishop of Birmingham from 2000 to 2009, said Leonard was in a nursing home when he took over as archbishop, and he met him only once. Nichols said he found a "much-diminished old man who was clearly incapable of remembering much."

Fr. Gerard Doyle, a parish priest in Stone, England, said in the early 1990s that he received a call from Leonard, who instructed him to dress in plain clothes and visit Penney at the Gracewell Institute, Birmingham, where he was undergoing therapy following child abuse allegations.

Doyle said he was ordered to inform Penney that his arrest was imminent, to give him "several hundred pounds" and to tell him to leave for Ireland and from there to travel to America.

"I was in shock, I couldn't believe what I was being told to do," said Doyle, in a statement read by Jacqueline Carey, legal counsel for the inquiry.

"I was upset and stunned by Leonard's request. When the conversation ended, I put the phone down in a state of shock and confusion," he said.

Leonard changed his mind and called Doyle again to tell him to tip off Penney's sister instead, which he did.

"I would not have carried out the vicar general's first instructions," Doyle said. "I felt it was fundamentally wrong."

Penney was jailed for seven-and-a-half years in 1993 for the abuse of children on camping trips and in his rectory.

Robinson, however, moved to California in 1985, the year the archdiocese learned of abuse allegations against him, on the recommendation of Leonard.

U.S. church authorities revoked his faculties in 1993, when the Birmingham Archdiocese made the allegations known to them, with the intention of sending Robinson back to England.

But the priest disappeared; a decade later, British Broadcasting Corp. journalists found him managing a trailer park in California.

He was extradited to the U.K., where in 2010 he was sentenced to 21 years in jail for the abuse of six boys.

During the inquiry hearing, Nichols faced tough questions over his handling of claims of child abuse allegedly committed by Fr. John Tolkien, the son of J.R.R. Tolkien, the author of "The Hobbit" and "The Lord of the Rings" trilogy.

The cardinal was criticized for failing to disclose to the complainants the existence of a note showing that Tolkien had been sent for treatment following allegations in 1968 that he had ordered some Boy Scouts to strip naked.

Nichols argued, however, that he received no legal advice to disclose the letter and said police were in possession of the full file on Tolkien.

He said he also had to take into account representations made by lawyers acting for the Tolkien family, who were concerned that the priest was, at the time, in such poor health that he could not defend himself.

One of the complainants, Christopher Carrie, who said he was abused by Tolkien in 1957 as an 11-year-old, was nevertheless later awarded 15,000 pounds by the archdiocese in an out-of-court settlement.

Nichols told the inquiry he was "still learning" about how to address the "terrible evil" of child abuse.

The inquiry noted that he had met victims of abuse on 17 occasions.

"I should have made it easier for more people to come, but some who came I learned to know well and among them I count as friends," Nichols said.

"What I learned most of all was the lasting, corrosive, destructive influence, effects and impact of child sex abuse," he said.

He continued: "Any abuse committed by someone who represents the Catholic faith is destructive of the trust that the victim might have found in the truths of faith.

"It is destructive of one of the places were many people find succor and encouragement and comfort, and that is why the abuse of children in the context of a church and in the context of faith is such a terrible, terrible thing. In a way, it poisons the very wells of our salvation, and it indeed breaks my heart and will forever mark ministry as a priest."

The Birmingham Archdiocese is one of the worst afflicted by clerical abuse in England and was nominated as a case study to represent the church at the inquiry, which is investigating child abuse throughout a range of U.K. institutions.

In homily, Calif. priest says he was abused, hears from dozens of victims