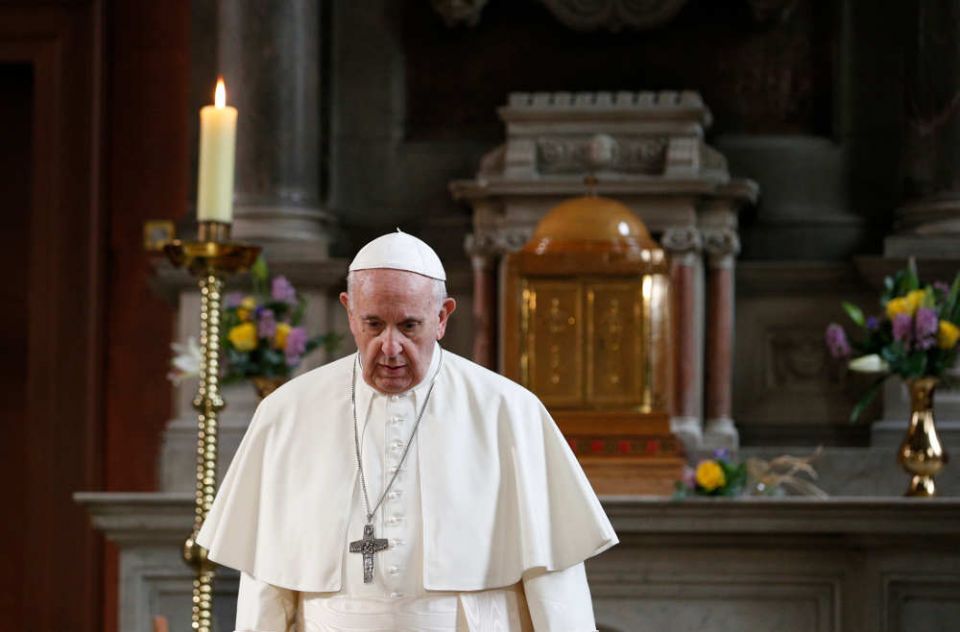 Pope Francis walks in front of a candle in memory of victims of sexual abuse as he visits St. Mary's Pro-Cathedral in Dublin Aug. 25. A baby cried in the cathedral as the pope prayed in front of the candle in the Blessed Sacrament chapel. (CNS/Paul Haring)

Update: A second update was added to this story at 9:55 a.m. U.S. central time to include information about the pope's visit to St. Mary's Pro-Cathedral.

This article was updated at 7:49 a.m. U.S. central time to include reactions to the pope's speech.

Dublin — Pope Francis began his two-day trip to Ireland by acknowledging that Catholic leaders in the country failed over decades to protect children from sexual abuse by priests and clergy, saying bishops and superiors had caused what he termed "grave scandal."

In a speech to Ireland's political leaders shortly after landing from Rome Aug. 25, the pontiff said the church's inability to prevent "repugnant crimes" of abuse "has rightly given rise to outage, and remains a source of pain and shame for the Catholic community."

"I myself share those sentiments," said Francis, before quoting a 2010 letter to the Irish people from Pope Benedict XVI that promised "just and effective" measures would be taken to protect children going forward.

While the pope did not outline specific steps being taken to hold bishops who protected abusive priests to account, he said that with his recent Aug. 20 letter on the issue to all Catholics around the world he had made "a commitment ... to eliminating this scourge from the church no matter the cost."

Francis is visiting Ireland Aug. 25-26 primarily to take part in the ninth World Meeting of Families, a triennial Vatican-hosted gathering that seeks to share the Catholic Church's family teachings and show its closeness to families around the world.

But the focus of attention ahead of the visit has been on how he would address clergy sexual abuse in the country, where a series of government inquiries in the 1990s and 2000s uncovered wide spread abuse of children by individuals, enabled by church institutions and systemically covered up by church officials.

Several prominent abuse survivors had called on Francis ahead of the visit to admit to the Vatican's role for decades in helping cover-up abuse cases, which he did not do in the Aug. 25 speech.

Instead, speaking to about 250 Irish political, civil and religious leaders at the 13th-century Dublin Castle, Francis said he was "very conscious of the circumstances of our most vulnerable brothers and sisters."

"With regard to the most vulnerable, I cannot fail to acknowledge the grave scandal caused in Ireland by the abuse of young people by members of the church charged with responsibility for their protection and education," the pontiff continued.

"The failure of ecclesiastical authorities -- bishops, religious superiors, priests and others -- adequately to address these repugnant crimes has rightly given rise to outrage," he said.

In his speech greeting Francis, Irish Taoiseach (Prime Minister) Leo Varadkar directly asked the pontiff to "use your office and influence" to "bring about justice and truth and healing for victims and survivors.

"There can only be zero tolerance for those who abuse innocent children or who facilitate that abuse," Varadkar told the pope. "We must now ensure that from words flow actions."

The prime minister also referred to the recent release of a grand jury report in Pennsylvania that revealed that Catholics priests in the state abused at least 1,000 minors over a period of seven decades.

"We have all listened to heart-breaking stories from Pennsylvania of brutal crimes perpetrated by people within the Catholic Church, and then obscured to protect the institution at the expense of innocent victims," said Varadkar. "It is a story all too tragically familiar here in Ireland."

Colm O'Gorman, an Irish survivor and founder of survivor support organization One in Four, said on Twitter that the pope had been given an opportunity to "finally acknowledge the proven truth of Vatican's role in the cover up of crimes perpetrated against so many people here."

"He failed to do so," said O'Gorman, who now leads Amnesty International Ireland. "This seems to me to be a shameful deflection of responsibility on the part of the Pope, and an insult to faithful Catholics."

"The Pope addressed the crisis but again chose to give no specific plan for ending it," said Doyle. "Nor did he squarely acknowledge his own responsibility for it: nothing in his tone suggested a 'buck-stops-here' mentality."

Marie Collins -- an Irish abuse survivor, former member of the Pontifical Commission for the Protection of Minors, and attendee of the pope's speech -- said simply: "Disappointing, nothing new."

Francis is only the second pope to visit Ireland, after John Paul II in 1979. The country has changed in ways large and small in the intervening 39 years, transforming from the Catholic bastion of Europe into a more modern, secular society.

In one example of the dramatic shifts over the past four decades, an overwhelming majority of the country voted in May to repeal an amendment to the Irish constitution that made abortion illegal in nearly all circumstances. Three years earlier, a similar referendum approved same-sex marriage.

Francis did not mention either issue in his address at Dublin Castle, but did say that the World Meeting of Families is a "prophetic witness to the rich patrimony of ethical and spiritual values that it is the duty of every generation to cherish and protect."

The pontiff also did not refer to the pending exit of the United Kingdom from the European Union, which many Irish fear may impact relations between the Republic of Ireland, an EU member, and Northern Ireland, which is part of the UK.

Pope Francis said he has made "a commitment ... to eliminating this scourge from the church no matter the cost."

Of particular concern is the border between the two entities, which is currently open and essentially unnoticeable. Some fear the process could lead to the re-imposition of border controls, which were removed after the Good Friday Agreement.

The pope did praise the Irish peace process, and expressed hope that Ireland and Northern Ireland will "overcome every remaining obstacle and help give birth to a future of harmony, reconciliation and mutual trust."

Francis landed in Dublin mid-morning Aug. 25. After a somewhat austere greeting on the tarmac, the pontiff headed in a Czech-made Skoda car to the country's presidential palace, known as the Áras an Uachtaráin, for a more formal welcoming ceremony and a private meeting with President Michael Higgins.

Crowds along the pope's route through the capital were sparse, but there were small clumps of people flying Vatican flags and holding signs. One read: "We love the pope, he gives us hope."

Later in the afternoon the pope visited St. Mary's Pro-Cathedral, where he responded to questions from two young couples. The cathedral is a 19th century structure built during the era of Ireland's anti-Catholic penal laws that now maintains a perpetually lit candle for victims of sexual abuse.

Upon arriving at the cathedral, Francis sat in prayer before the candle for about three minutes.

Read this next: Ahead of World Meeting of Families, event amplifies excluded voices

In the evening Francis will take part in the "Festival of Families," a large concert and celebration for the last evening of the World Meeting of Families being held at Dublin's 82,000-capacity Croke Park Stadium.

In between songs and dances, the pontiff will hear testimonies from Indian, Canadian, Iraqi, Burkinabe, and Irish families before giving his own speech.

This year's World Meeting of Families is taking the theme "The Gospel of the Family: Joy for the World," drawn from the pope's 2016 apostolic exhortation on family life, titled Amoris Laetitia, or, "The Joy of Love."

Francis will conclude his visit to Ireland Aug. 26 with a visit to a Marian shrine in Knock, about 120 miles west of Dublin, before returning to the capital for a public Mass and a meeting with the country's bishops. 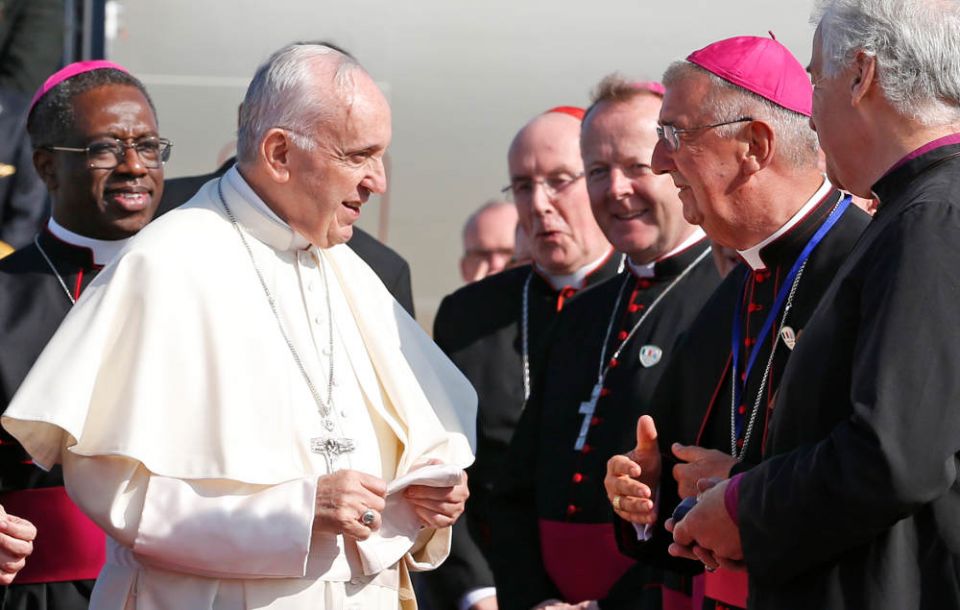 Pope Francis greets Archbishop Diarmuid Martin of Dublin as he arrives in Dublin Aug. 25. The pope is attending the World Meeting of Families in Dublin and is scheduled to meet with survivors of clerical sexual abuse. (CNS/Paul Haring)