by Sarah Mac Donald
World
This article appears in the World Meeting of Families 2018 feature series. View the full series. 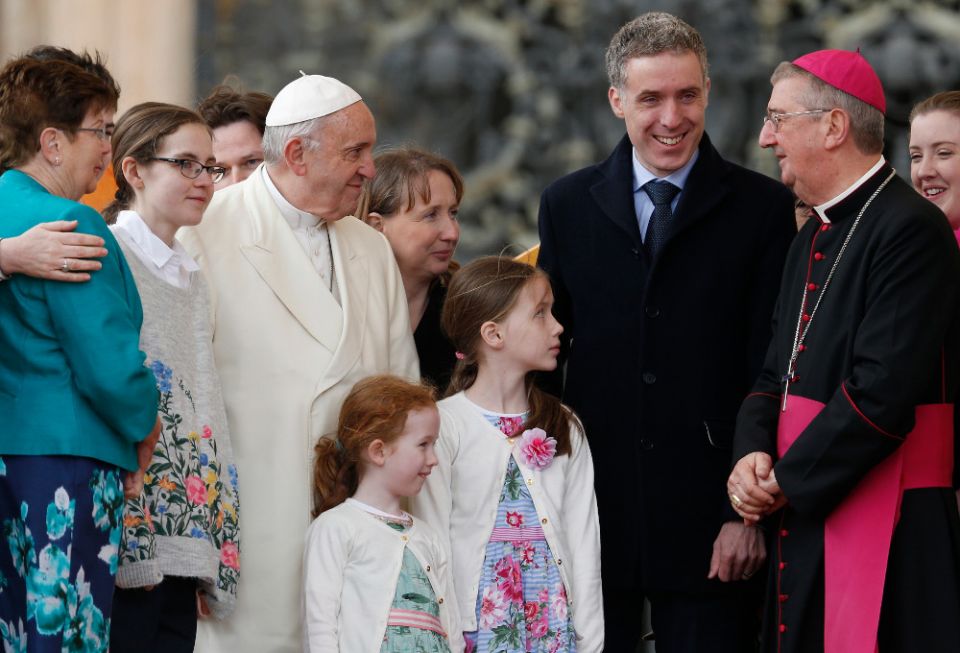 Pope Francis talks with Archbishop Diarmuid Martin of Dublin as he meets an Irish delegation of families during his general audience in St. Peter's Square at the Vatican March 21. At the audience the pope confirmed that he will visit Ireland Aug. 25-26 for the final days of the World Meeting of Families. (CNS/Paul Haring)

Dublin — Despite Irish Catholics' many misgivings about the sexual abuse scandals in the church and the treatment of women and LGBT people, there is much enthusiasm for the ninth World Meeting of Families, scheduled to take place Aug. 21-26 in Dublin.

Even with gloomy predictions of the Catholic Church's terminal decline, concerns about a low turnout have proved unfounded. More than 37,000 visitors are signed up for the Pastoral Congress Aug. 22-24 at the Royal Dublin Society, and tickets have long been booked. In addition, a half a million tickets for the Aug. 26 papal Mass in Phoenix Park booked out within two weeks, and tickets for the Aug. 26 papal event at Knock Shrine went even faster.

The triannual event has registered a record number of overseas visitors. Over 15,000 pilgrims from 116 countries will descend on the Irish capital for the congress, the highest overseas representation since the meeting was established in 1994.

"We have the highest number of children under 18 coming to this event — almost 6,000 registered," said Fr. Timothy Bartlett, secretary general of World Meeting of Families 2018.

The theme of this year's World Meeting of Families is "The Gospel of the Family: Joy for the World." Pope Francis' apostolic exhortation on the family, Amoris Laetitia, underpins the congress proceedings, and participants will hear keynote addresses from prelates like U.S. Cardinal Donald Wuerl of Washington, Cardinal Vincent Nichols of Westminster, England, and Cardinal Mario Zenari, the apostolic nuncio to Syria.

Thousands of volunteers on the ground aim to ensure the smooth running of the congress, which involves over 80 workshops and panels, some 300 national and international speakers and 300 exhibition stands.

While organizers may be happy with how preparations have gone so far, there has been some disquiet over the exclusion of certain groups and the inclusion of specific speakers.

American Jesuit Fr. James Martin, who has sought to build a bridge between the LGBT community and the church, is scheduled to give a workshop on how parishes can welcome LGBT Catholics, their parents and families. But Martin has been targeted by the Irish branch of the international movement Tradition, Family, Property with a petition requesting that he withdraw from the congress. The petition has garnered more than 11,000 signatures.

In the petition, an open letter to Dublin Archbishop Diarmuid Martin, president of the World Meeting of Families, the Irish Society for Christian Civilisation claims Fr. Martin should not have been invited because he "is a supporter of New Ways Ministry, a pro homosexual and lesbian religious organization which has been declared gravely unacceptable by the United States Conference of Catholic Bishops." It is NCR's understanding that organizers have no intention of rescinding the invitation to Fr. Martin.

Global Network of Rainbow Catholics, an international coalition of 32 Catholic LGBT organizations, failed to secure an exhibition stand at the Royal Dublin Society. We Are Church Ireland, a lay reform group, also failed to secure a stand. Censured Redemptorist Fr. Tony Flannery, a member of We Are Church Ireland's steering group, told NCR that the group's request was stalled by World Meeting of Families organizers.

"We applied in February and paid the requisite 1,250 euro, which is half of the total 2,500 euro for a stand," Flannery said. "At no stage did we get an answer from the organizers; we were constantly told the matter was still under consideration. When the final date passed for booking a stand, we had had no answer. The 1,250 euro check had not been cashed. This is a hopeless way to run any event."

Christopher Vella, Global Network of Rainbow Catholics co-chair, believes it is important for LGBT Catholics to be represented at the event.

"The reality is that LGBTI people and families are part of the church," he said. "They deserve effective ministry and pastoral care, just like everyone else in our church."

Though Flannery will not be attending the World Meeting of Families congress, he is attending the papal Mass as a mark of his admiration for Francis. Flannery is also speaking in a panel discussion "Voices Pope Francis Will Not Hear" on Aug. 20 at Trinity College Dublin, ahead of the official opening of the congress. Organized by Wijngaards Institute for Catholic Research, the discussion will see theologians and campaigners discuss some of the topics excluded from the World Meeting of Families. Flannery, who also feels let down by his Redemptorist superiors, will criticize the Congregation for the Doctrine of the Faith's processes as "blatantly and obviously unjust."

"My case is typical of the process that has been used by the CDF," he said. "I am disappointed that somebody isn't doing something about this, and I don't just mean the Vatican — I also mean the Irish bishops, because there are a number of us [priests] here in Ireland who have been treated in this shameful way."

Other topics speakers will discuss at Trinity College Dublin include the marginalization of women and LGBT persons in the church, the harm caused by the ban on contraception, and the recent abortion referendum in Ireland.

"The hierarchy must move beyond the notion that it is God's plan for humanity that women should never be able to be leaders in the church, and that same-sex relationships are incapable of reflecting the love of God," said NCR books editor and columnist Jamie Manson, who is participating in one of the panels.

"Catholic doctrine teaches that God is everywhere and is present is all persons," she added. "And yet, when it comes to women who want to be priests or LGBT persons who want to love, the church tells them that God cannot work within them and their relationships in a sacramental way. Our church leaders must, in essence, stop telling God where God can and cannot be."

The aim of the panel discussion is to let women and LGBT Catholics know that theologians and academics from all disciplines are determined to continue questioning the church's teaching where it is based on prejudice and the misinterpretation of texts, said Miriam Duignan, communications director and trustee of the Wijngaards Institute. The Wijngaards Institute is also launching a new research report into church teaching and treatment of LGBT Catholics with Mary McAleese, former president of Ireland, who argues that there is a need for a theological review of the church's teaching and practice on this matter. 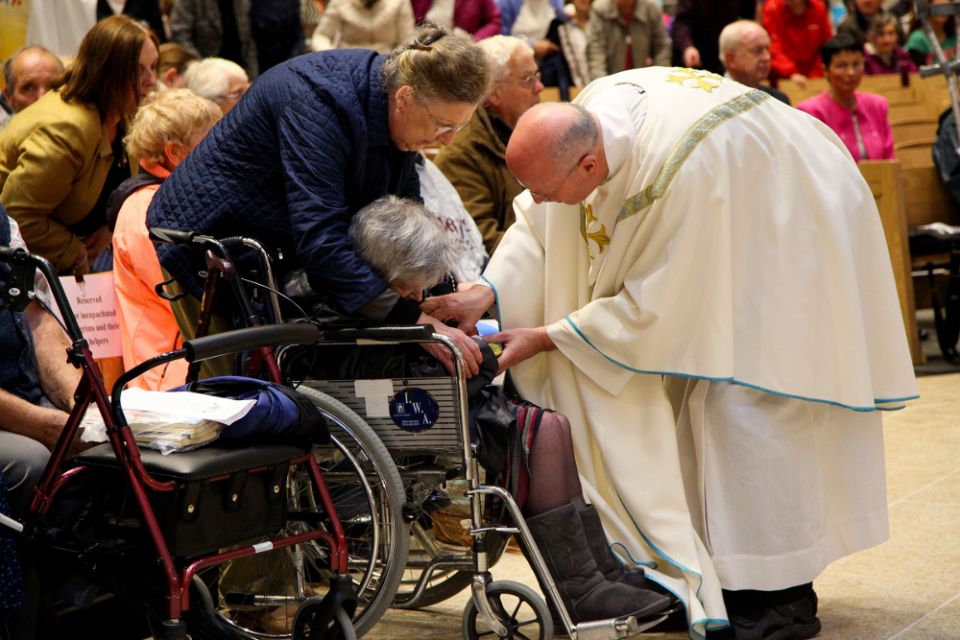 A priest blesses an elderly woman in 2017 at the Knock Shrine in Ireland. Pope Francis is scheduled to visit the shrine during his Aug. 25-26 trip to Ireland for World Meeting of Families in Dublin. (CNS/Courtesy of John McElroy)

"Over the coming months, academics from different disciplines are going to tackle the various aspects of the question from the perspectives of biology, psychology, sociology and theology," said Duignan. She anticipates the research will show that one of the key arguments behind the papal teaching affirming that homosexuality is against nature — namely, that it is intrinsically non-procreative and so against the "natural" purpose of sex — "is a gross misunderstanding of the meanings and purposes of human sexuality."

A protest is being planned by Women's Ordination Worldwide to coincide with the Aug. 26 closing papal Mass celebrated by Francis. Kate McElwee, executive director of Women's Ordination Conference, a member of the umbrella group Women's Ordination Worldwide, told NCR a prayerful public witness for women's equality in the church will be held at the entrance to the park before Mass. The group, which received permission to protest from the Irish police, will be calling on Francis to open the door to dialogue on women's ordination and to "recognize that there is no credibility in a church that denies equality to more than half of its members," McElwee said.

"The Vatican's repeated attempts to limit God's priestly call to celibate men causes great pain to the women who have discerned their vocation to the priesthood, as well as to the people of God who are deprived of women's gifts and sacramental leadership," McElwee said. She highlighted how the exclusion of women from ordained ministries affects their access to decision-making in the church, "leaving the experiences and voices of women marginalized from church policies that impact their lives."

In what may be a bid to stave off such criticism, the World Meeting of Families has introduced a special add-on women's symposium to its program. "Voices of Impact: Women Leaders Shaping Global Change," scheduled for Aug. 25, will discuss the global impact of women's leadership. Among the speakers are Norwegian Major General Kristin Lund, the first woman to lead the U.N. Peacekeeping Forces.

However, We Are Church Ireland described the symposium as "a stunt to present the Catholic Church as women-friendly." In a statement, the group said it was "disingenuous" for Archbishop Martin and World Meeting of Families organizers to seek to "celebrate the success of women in business and society while ignoring their continued second-class status in the Roman Catholic Church."

"The reality is that LGBTI people and families are part of the church. They deserve effective ministry and pastoral care, just like everyone else in our church."

Meanwhile, the Lumen Fidei Institute is hosting "Conference of Catholic Families" Aug. 22-23 in Dublin. Spokesman Anthony Murphy told NCR that it will focus on Pope Pius XI's encyclical Casti Connubii, which anticipated Humanae Vitae in its teaching on marriage, procreation and contraception. Those attending the conference will hear a recorded address from U.S. Cardinal Raymond Burke via video and Kazakhstani Bishop Athanasius Schneider, both prominent critics of Francis.

A rally is also planned by Colm O'Gorman, the head of Amnesty International, who was abused at 14 by Fr. Sean Fortune. O'Gorman's protest will be held Aug. 26 at Dublin's Garden of Remembrance to coincide with the papal Mass as a mark of solidarity with victims of abuse.

He announced the gathering after Archbishop Martin appeared to suggest that Francis might not have time to meet abuse survivors. This provoked a strong reaction from Irish abuse survivor Marie Collins, who called on Francis both to meet with victims and "say what he is going to do about this crisis in the church."

Collins will take part, with Cardinal Sean O'Malley of Boston, in the first-ever workshop on child safeguarding at a World Meeting of Families congress.

"It is good to see the issue being included because it is important to families that their children are safe in their church and society," Collins told NCR.

This story appeared in the Aug 24-Sept 6, 2018 print issue under the headline: Ireland prepares for World Meeting of Families .