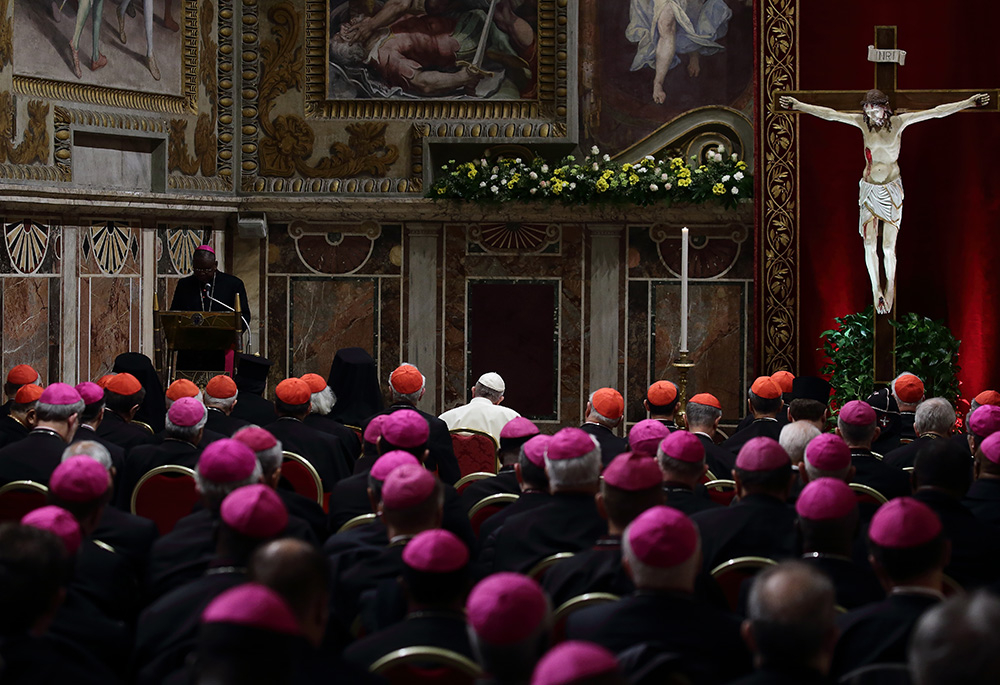 Pope Francis, cardinals and bishops attend a penitential liturgy during a meeting on the protection of minors in the church Feb. 23, 2019, at the Vatican. In 2019, Francis introduced a church law that promised to hold bishops and religious superiors accountable for abuse that they commit or cover up. (CNS/Evandro Inetti, pool)

Three years ago, as the Catholic Church faced an unprecedented reckoning with clergy sexual abuse, Pope Francis introduced a church law that promised to hold bishops and religious superiors accountable for abuse that they commit or cover up.

Entitled Vos Estis Lux Mundi ("You Are the Light of the World"), the law was touted by papal spokesmen as a turning point in the fight to end child sexual abuse in the Catholic Church.

"The silence, omertà and cover-ups can now become a thing of the past," said Maltese Archbishop Charles Scicluna, the pope's trusted abuse investigator.

Vos Estis, a motu proprio that was signed on May 9, 2019, was originally enacted for a three-year trial period that ends this June 1. As we wait to see if Francis will now make the law permanent, it is a good time to assess what will likely be this pope's most significant response to the Catholic abuse crisis.

So far, the Vatican has released no information about the number or names of bishops investigated under Vos Estis. BishopAccountability.org has been able to identify 28 cases where it has been used to process allegations of cover-up or abuse by bishops. We hope it is being used more widely than this — there are 5,600 living Catholic bishops! — but we can't be sure.

At least 11 of the Vos Estis or Vos Estis-like cases have been in the United States. Two of these bishops have been sanctioned, three have been "cleared," and six face ongoing probes.

But the largest concentration of cases, interestingly, has been in Poland, where Vos Estis procedures have been applied against 16 of the country's 209 active or retired bishops. Eleven appear to have been found guilty by the Vatican of negligence, with sanctions announced in eight of these cases; one archbishop "self-punished"; two others have been cleared; and two other cases are ongoing. 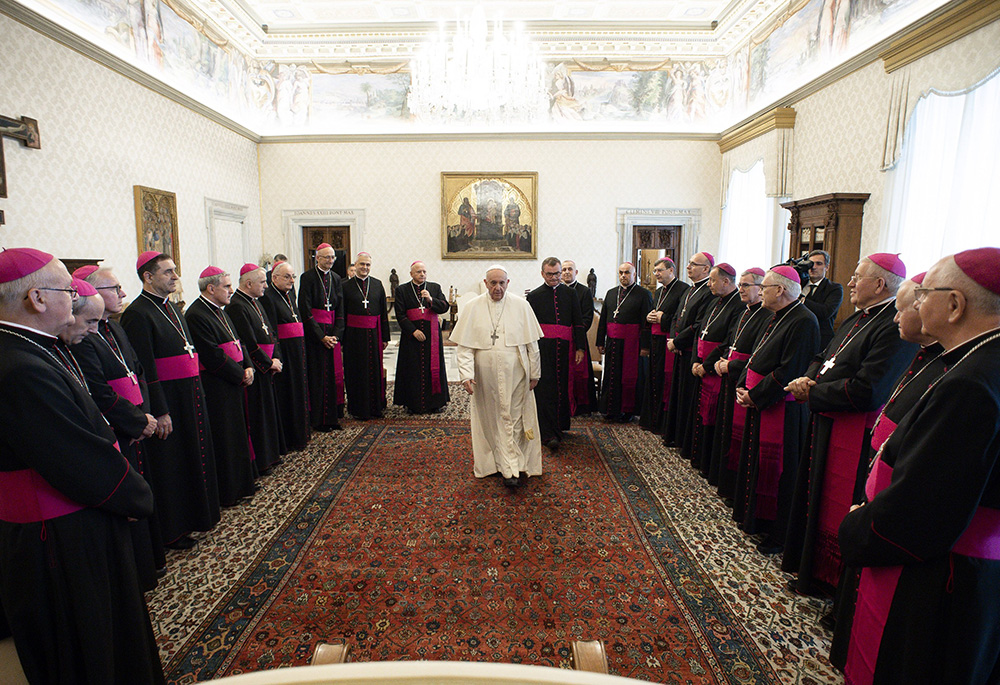 Pope Francis meets with Polish bishops at the Vatican Oct. 12, 2021, during their "ad limina" visit to Rome. (CNS/Vatican Media)

Why the focus on Poland? It's likely Vatican officials saw an opportunity to do damage control in this most Catholic of countries, which has become a flashpoint in the church's global crisis. Since 2019, due to media investigations and two searing documentaries, Poland has been rocked by revelations of widespread complicity by its bishops. Half of all Poles surveyed last fall said that the entire episcopacy should resign.

And despite the spate of sanctions, a cadre of alleged enablers remains in power in the Polish church.

Cardinal Kazimierz Nycz, the archbishop of Warsaw, is accused of allowing two different priests to minister following their convictions for child sex crimes. Cardinal Stanislaw Dziwisz, archbishop emeritus of Krakow, was recently pronounced not guilty of negligence in a clergy abuse case in Poland, despite a whistleblower priest's insistence that he had notified Dziwisz of the abuse in person. The Vatican's verdict concerned only the one Polish case; it did not consider allegations that as secretary to Pope John Paul II, Dziwisz had dismissed abuse reports against both Fr. Marcial Maciel Degollado, the disgraced founder of Legion of Christ, and ex-Cardinal Theodore McCarrick.

Our assessment so far of Vos Estis, based on the cases we've tracked in Poland, the United States, and elsewhere: Too few bishops have been found guilty, they've been punished too lightly, and next to no information about their misdeeds has been disclosed. 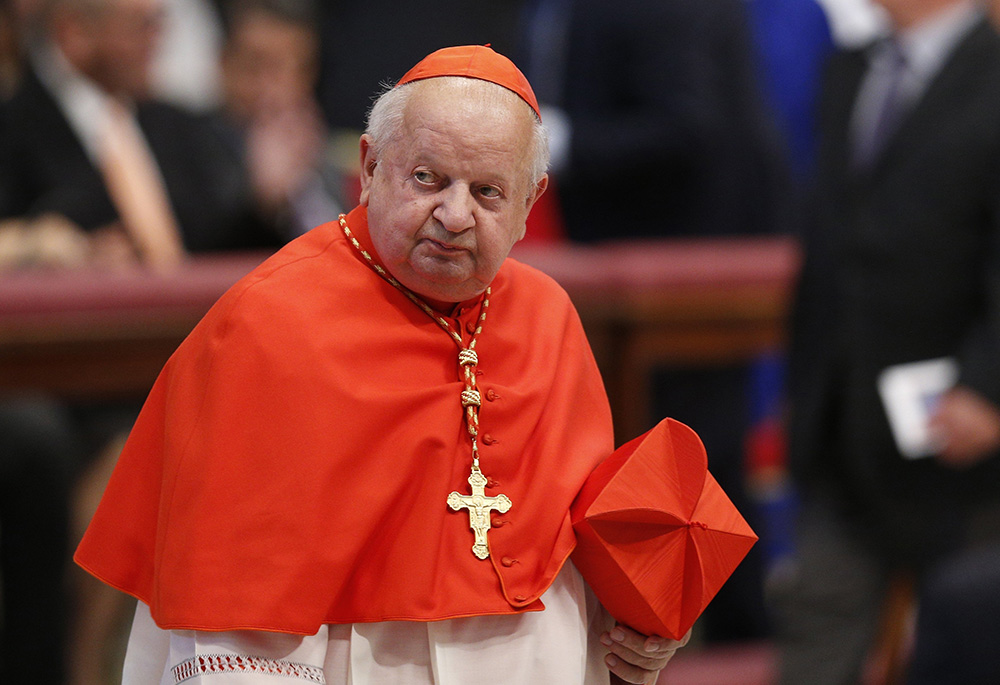 Polish Cardinal Stanislaw Dziwisz of Krakow, Poland, arrives for a consistory in St. Peter's Basilica at the Vatican in this June 28, 2018, file photo. (CNS/Paul Haring)

To be sure, under Vos Estis, a dozen or more complicit or abusive bishops have been removed from office — and that's not nothing.

But it's a drop in the bucket.

The collective complicity of the Catholic hierarchy, ranging from negligence to willful ignorance to wily deceit, has facilitated the rapes and sexual assaults of hundreds of thousands, if not millions, of children. A remorseful church committed to ending its culture and system of cover-up would have demoted and defrocked hundreds of complicit supervisors — not one or two dozen.

Moreover, the majority of Vos Estis cases were necessary for PR reasons. In all but two of the U.S. cases, for instance, the bishop's ability to lead was already impaired by public allegations. Similarly, nearly all of the Polish bishops penalized under Vos Estis had already been tarred by public scandal.

The weakness of Vos Estis lies mainly in its design: It is self-policing packaged as accountability.

In crafting Vos Estis, the pope prioritized insularity and containment, keeping the hierarchy in total control of the reporting and investigative process. He chose not to require notifying civil authorities. He chose to omit any obligation to notify the public. He limited lay involvement to roles that are fragmented, powerless and (almost certainly) bound by confidentiality.

To be the transformative tool that's needed, Vos Estis must be revamped. Here are five (admittedly major) changes that would make it effective.

Under Vos Estis, most of the world's bishops are allowed not to tell civil authorities that a priest is raping a child. That's because in most civil jurisdictions, clergy are not mandated reporters, and Vos Estis at most requires reporting only when civil law requires it.

Delete Article 19, Vos Estis' minimal nod to cooperation with civil law. Replace it with mandatory reporting to civil authorities whether or not local law requires it. That is, instruct every priest and religious to notify civil authorities of suspected or known sexual offenses, as well as suspected cover-up by church officials.

Exempt clergy from this requirement in those few jurisdictions worldwide where there is good reason to fear that such reporting would imperil the safety of accusers and/or suspected offenders. Reputable human rights organizations such as Amnesty International could be called on to generate the list of exempted countries.

Vos Estis was a doubling down of the pope's and the Vatican's control over matters of episcopal discipline — an ironic move by a pope who decries clericalism.

Under Vos Estis, the Vatican controls every key decision. Only it has the power to authorize an investigation, to render a verdict, and to determine penalties.

The problem? Almost invariably, the pope and Vatican officials are lenient towards accused bishops.

Consider Francis' 2020 decision to reinstate Argentine Bishop Gustavo Zanchetta to a Vatican post, even though the bishop was still under investigation in his native country for alleged sexual abuse. (Zanchetta eventually had to return to Argentina for trial and was recently sentenced to four years in prison.)

Or consider the Vatican's shocking verdict last year in the canonical case of Bishop Joseph Hart, who ran the Cheyenne, Wyoming, Diocese from 1978 to 2001. Despite allegations that Hart had sexually assaulted more than 15 children, and despite the current Cheyenne bishop's unwavering insistence that the victims are credible, the Congregation for the Doctrine of the Faith cleared Hart on every count. (Note: Hart's was not a Vos Estis case, presumably because the Vatican began its inquiry before Vos Estis was enacted, but the canonical process was similar.) 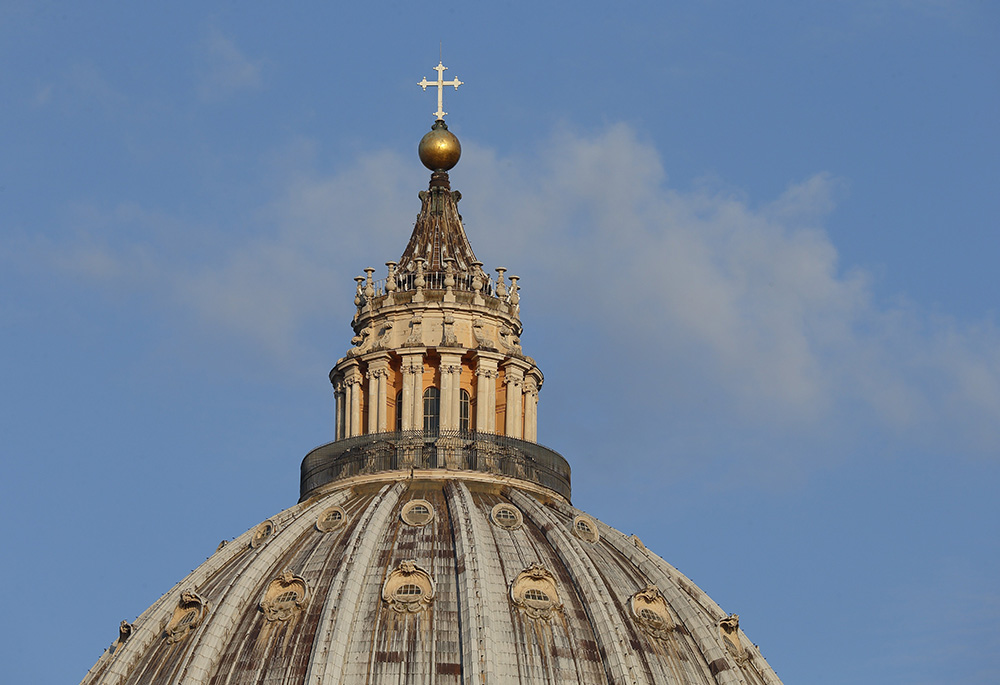 Vos Estis tasks metropolitans — residential archbishops who symbolically lead their ecclesiastical provinces around the world — with initially assessing and overseeing investigations of accusations against bishops in their provinces.

Not surprisingly, the result has been conflicts of interest, actual and perceived. Archbishops are investigating neighboring bishops who are their colleagues, their collaborators, and, sometimes, their friends.

Consider the Vos Estis case of retired Brooklyn Bishop Nicholas DiMarzio. After he was accused of child sexual abuse in late 2019, the Vatican tagged his metropolitan, Cardinal Timothy Dolan of the New York Archdiocese, to oversee the investigation.

In his podcast a few weeks later, Dolan made no effort to appear impartial. "I love the guy, he's a good friend," he said of his colleague. (In September 2021, Dolan announced that the Vatican had found DiMarzio innocent.)

In another Vos Estis case, the metropolitan is implicated in an alleged act of cover-up along with the bishop he's investigating. Bishop Richard Stika of Knoxville, Tennessee, is being investigated for cover-up by retired Louisville Archbishop Joseph Kurtz, who preceded Stika as Knoxville bishop.

Stika is facing a slew of allegations, including one that surfaced in a lawsuit he settled last July. A woman accused the diocese of negligence in its response to her alleged sexual abuse and exploitation by a longtime diocesan priest, Fr. Michael Sweeney. In 2005, Sweeney had admitted to his then-bishop — none other than Kurtz — that he had started having sex with the woman after converting her to Catholicism and serving as her spiritual director. 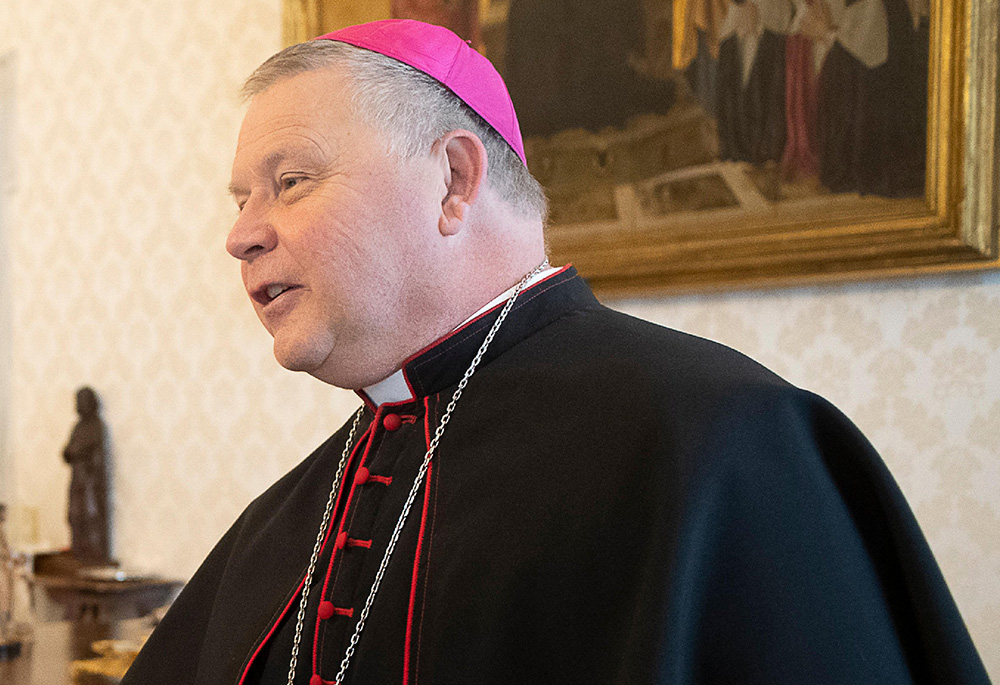 If the Vatican's control is loosened, and the metropolitan model scrapped, who will judge allegations against bishops?

How about non-clerics? Many have observed that Vos Estis doesn't mandate lay involvement. Few have pointed out that it effectively prohibits the possibility of lay boards anywhere being allowed to review allegations against prelates. It allows only the enlisting of individual lay experts on an ad hoc basis (Article 13). These persons must be deemed "suitable," and they are required to take an oath.

This must change — external oversight is crucial. For each episcopal conference, there should be a permanent lay commission dedicated to evaluating bishops. This would be similar to the model promoted in the fall of 2018 by Archbishop Allen Vigneron and Cardinal Daniel DiNardo — but it must be more independent and powerful than what those bishops proposed. It should include no clergy, its members should include outspoken critics of the church's handling of abuse, and it must be empowered to report to civil authorities.

Vos Estis enables secrecy. Under Vos Estis, it is permissible to keep the public in the dark from start to finish. It includes no requirements to inform the faithful.

Change this. Mandate disclosure. To quote Scicluna, "Information is of the essence if we really want to work for justice." It's also crucial to deter crimes and cover-ups.

Begin by requiring that the public be notified of all plausible allegations against clergy and bishops. Require public notification of outcomes too. Adopt the sensible recommendation of Australia's Royal Commission into Institutional Responses to Child Sexual Abuse to "publish decisions in disciplinary matters relating to child sexual abuse, and provide written reasons for [the church's] decisions."

Most importantly, honor a complainant's right to information. Require church authorities to regularly update victims and other reporters on the status of investigations. Upon request, release to the victim the files about her case, redacting the names of other victims.

In April, Francis asked the Pontifical Commission for the Protection of Minors to produce written reports tracking the church's anti-abuse initiatives. He hopes the reports will show progress.

"Without that progress," he warned, "the faithful will continue to lose trust in their pastors."

It's baffling that this pope still has not enacted the bold reforms that would make the hierarchy more lawful, responsible and honest in preventing abuse and cover-up.

The problem is that the pope wants trust restored on his own impossible terms. Vos Estis reflects his refusal to accept the irrefutable lesson of this catastrophic crisis: The Catholic hierarchy cannot self-police.

It's possible that Vos Estis, along with the removal of the pontifical secret in abuse cases, will be the final major abuse legislation of Francis' papacy. Let's hope it can be revised. In its present form, it will not achieve the transformation that children and Catholics so desperately need and deserve.