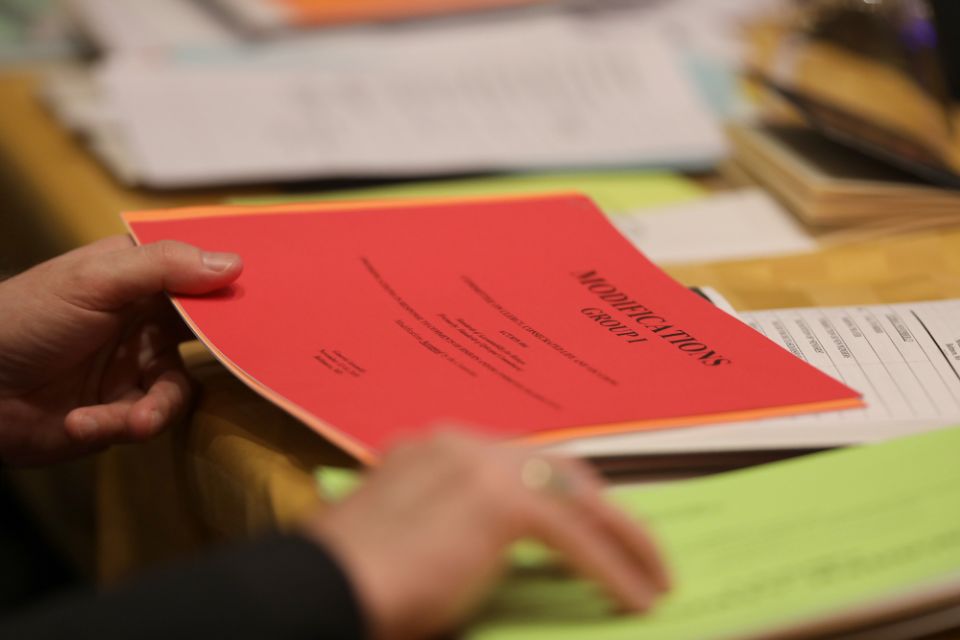 A bishop sorts through documents on sexual abuse for discussion Nov. 13 at the fall general assembly of the U.S. Conference of Catholic Bishops in Baltimore. (CNS/Bob Roller)

Baltimore — A proposed new system for reporting allegations of misconduct by U.S. Catholic bishops was met with wide criticism on the floor of the prelates' annual assembly, with clerics across the ideological spectrum raising a diverse set of concerns.

The leadership of the bishops' conference has suggested creation of a new commission to receive and investigate accusations of misconduct by prelates, as part of its response to the outcry over this year's revelations about now disgraced ex-cardinal Theodore McCarrick.

According to the draft proposal, the commission would be a non-profit organization separate from the conference. Composed of nine members and a board of directors, it would be tasked with evaluating accusations and then passing them on to the Vatican's ambassador to the U.S. for further review.

But more than a dozen bishops raised concerns on the floor of the meeting Nov. 13.

Retired Bishop Gerald Kicanas of Tucson, Arizona, referred to the possibility of allegations against a bishop being forwarded to the metropolitan archbishop of the region of the country in which he is stationed, who could then forward them to the ambassador.

"We're struggling to find ways to hold ourselves more accountable," Kicanas noted, but added: "It seems like we're adding something that doesn't have a particular purpose."

Chicago Cardinal Blase Cupich asked if the bishops' executive committee, which drafted the proposal, had considered the ecclesiological dimensions of their idea.

"It seems to me that we are separating this function away from ... the life of the church, as a separate entity, when in fact we already have a system," said Cupich.

"I'm wondering if we're going to get into a mentality ... of seeing this as something that we're outsourcing, rather than taking responsibility for ourselves as pastors in terms of complaints," he said.

Chaput, who is a member of the executive committee, said that in drafting the proposal the group thought using metropolitans in such a way would require a change in canon law, and that it might be easier to develop a new commission than change canon law.

"Perhaps what we should pursue is to ask [the Vatican] for a change in the law," he suggested.

Detroit Archbishop Allen Vigneron, the incoming secretary of the bishops' conference, presented the proposal for the new structure, which would be formally named the "Special Commission for Review of Complaints Against Bishops for Violations of the Standards of Episcopal Conduct."

Given that the conference does not have power to require that any bishop participate in such a process, the text of the proposal envisions that each individual prelate voluntarily choose to do so.

It also envisions that the non-profit would "maintain appropriate corporate distinctions" from the bishops' conference. It says the nine members of the commission would include six laypeople, two bishops, and one priest.

After receiving an allegation, it states, the commission "will first assess whether the allegation pertains to the sexual abuse of a minor, and if so will report that allegation to civil authorities promptly."

The commission would then notify the ambassador of the accusation, conduct an investigation into it, and create "a substantial report that summarizes the facts, circumstances, imputability regarding the allegation, and recommendations for future actions."

Vigneron said the conference estimates that the initial cost of the group, which would be partly funded by the dioceses of the bishops taking part, would be about $500,000.

Bishop Steven Biegler of Cheyenne, Wyoming, wondered if that cost estimate was conservative.

Referencing his own investigation into one of his predecessors — Bishop Joseph Hart, who is accused of abusing young men as a priest in the 1970s — Biegler said: "I think your cost estimate is far too low."

The bishops' gathering started Nov. 12 with a surprise announcement that the Vatican's Congregation for Bishops had asked the group to delay planned votes on proposals to address the clergy abuse crisis, including for the new investigatory structure.

The prelates are planning now to discuss the measures without taking any formal votes.

Cupich pointed to one possible reason for the requested Vatican delay in his Nov. 13 comments on the floor, saying that the bishops had only received the proposal for the commission 10 days ago.

"Is there a reason we got these documents so late?" he asked.

Editorial: It's time to end pattern of deceit and denial on clergy sex abuse cases

Will the Vatican step up and hold bishops accountable?

Philadelphia priest ordered to return to prison after bail hearing