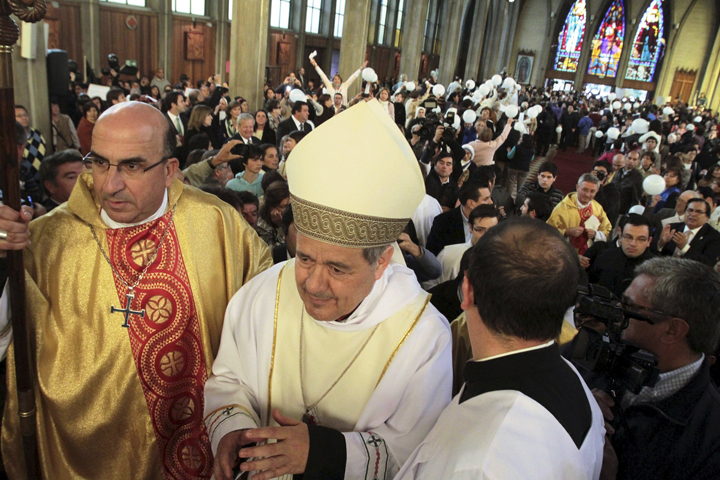 On Oct. 2, a Chilean news channel brought to light a May 6 recording of Pope Francis defending Bishop Juan Barros, who was recently assigned to Osorno, Chile, despite allegations that the new bishop covered up clergy sex abuse by a priest in the 1980s and 1990s.

Though evidence of the priest’s abuse was verified by Chile’s judicial court, statute of limitations allowed Fr. Fernando Karadima to dodge prosecution. When a separate Vatican investigation found the priest guilty of abuse, he was condemned in 2011 to a life of prayer and penance in a convent outside of Santiago.

“[The diocese] lost its independence once it let its head be filled with what politicians say, who are judging a bishop without any evidence, even after 20 years as bishop,” Francis said in the May 6 recording, before a group of Chilean Catholics in Rome who asked the pope to send a message to those in Osorno disappointed by the arrival of Barros. “Think with your heads and do not be led by the noses by the lefties who orchestrated this whole thing,” he said in Spanish, as translated by NCR.

Though Barros was never tried for covering up Karadima’s abuse, testimonial evidence has suggested Barros destroyed incriminating correspondence, while other victim testimonies claimed Barros was present during the sexual acts. Though Chilean courts uphold the testimonial evidence, Barros has denied the allegations and has never faced a canonical or civil case.

Francis appointed Barros bishop of Osorno in March, meeting stiff resistance by its people, most notably demonstrated by the hundreds of protestors at Barros’ installation Mass March 21. Francis made the appointment despite the objections, which haven’t abated.

In the video from May, Francis said, “The only charges brought against Barros were discredited by the judicial court, so please do not lose serenity,” he continued. “Osorno suffers, yes, but for being foolish, because they do not open their hearts to what God says, and instead get carried away by all this silliness that everyone speaks of.”

The Karadima case touches Francis not just through Barros: In 2013, Francis appointed Cardinal Francisco Javier Errázuriz Ossa – Karadima’s most powerful defender, and Santiago’s archbishop from 1998 to 2010 – as one of nine on the Council of Cardinals, a group that advises the pope. But Juan Carlos Cruz, one of Karadima’s alleged victims who testified that Barros was present during the sexual acts, has long been outspoken in accusing Errázuriz of conspiracy.

Then, in early September, a Chilean newspaper published an email exchange (dated 2013 and 2014) between Errázuriz and his successor, Cardinal Ricardo Ezzati. In the emails, which the archdiocese confirmed were authentic, the two cardinals discussed how to block Cruz from being invited to speak at a meeting of the pope’s child protection commission.

According to the Associated Press, Ezzati’s office said the emails were merely private exchanges of opinion, acknowledging that they had no influence on the Vatican’s decision. But the email scandal reignited outrage throughout Chile just months after Francis appointed Barros as Osorno’s new bishop.

The video of Francis was released two days after Errázuriz testified in a civil lawsuit against the archdiocese, filed by Cruz and two other victims of Karadima’s abuse. The accusations against Errázuriz asserted that the cardinal was fully aware yet chose to ignore the abuse as early as 2003. In his five-hour testimony, Errázuriz admitted that he knew of the allegations against Karadima, but said he failed to act because he sincerely believed the charges were untrue.

“I am the first to try and punish someone with these types of accusations,” Francis continued in the recording. “But in this case there is no proof – on the contrary. I say this from the heart. Do not be fooled by those who only look for fuss, who look for scandal.”

[Soli Salgado is an NCR Bertelsen editorial intern. Her email address is ssalgado@ncronline.org. Follow her on Twitter @soli_salgado.]