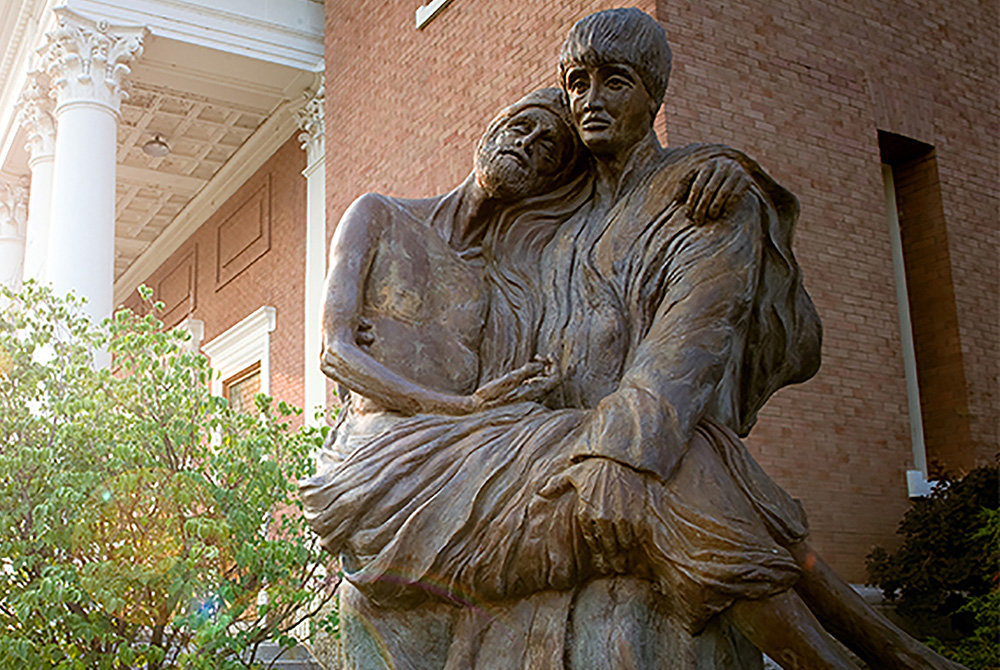 Gonzaga University, a Jesuit-run institution in the state of Washington, has established a special research fund to study sexual abuse in the Catholic Church and is taking steps to support local community members who have been particularly impacted by the crisis, especially Indigenous and Native students.

Those initiatives are among several recommendations that were outlined in a 46-page report that the university released Sept. 1 from its University Commission on Gonzaga's Response to the Catholic Sexual Abuse Crisis. The commission's work coincided with media reports that detailed a decadeslong pattern of sexually abusive Jesuits being permitted to live on campus while being shielded from accountability.

The Gonzaga report symbolizes the culmination of more than a year's worth of commission meetings, presentations at faculty conferences, lectures and open listening sessions for students, faculty and staff where deep reservoirs of community pain, hurt and distrust related to sex abuse in the church and the university's own complicity in the crisis were made evident.

"We could not and did not want to ignore the reality that this had actually impacted people right here as well," Gonzaga University President Thayne McCulloh told NCR in a Sept. 1 interview to discuss the report.

McCulloh was joined in the interview by the commission's co-chairs: Michelle Wheatley, Gonzaga's vice president for mission and ministry, and Megan McCabe, an assistant professor of religious studies.

"We listened to a lot of different kinds of responses in our community, and varying levels of awareness about sexual abuse within the Catholic Church," said Wheatley, who added that there will be a forum for the campus community to discuss the report's recommendations and ask questions.

In also speaking with commission members from Native backgrounds, McCabe said she and others learned how sexual abuse within a Catholic context is in many ways bound up in and an extension of colonialism for Native communities.

However, the Gonzaga report was criticized for being "unsubstantive" and "dismaying" by Terence McKiernan, the co-founder of BishopAccountability.org, a website that tracks the bishops' response to the clergy sex abuse scandals.

"Just the spectacle of a group of academics entirely beholden to the person they're advising, for the most part, dancing around the issue; that, I think, is my first takeaway," said McKiernan, who in an interview with NCR said the report sidesteps uncomfortable questions about the relationship between Gonzaga and the Jesuits' U.S. West Province.

McKiernan said that by his count, the province had at least 34 men credibly accused of sexual abuse who worked or were housed at Gonzaga's campus over the years.

"Nowhere in the report, as far as I can see, is there any interest in figuring out who made these decisions, and actually advising or even establishing some kind of accountability about what happened. You just don't see it," McKiernan said.

Gonzaga officials said the idea for a commission to study what the university could do in response to the ongoing problem of clergy sex abuse took root in the summer of 2018, when the public first learned the revelations that now-former cardinal Theodore McCarrick was credibly accused of sexually harassing seminarians and young priests over decades.

That August, the Pennsylvania state attorney general released a grand jury report documenting a decadeslong pattern where 301 priests were alleged to have sexually assaulted more than 1,000 children over a 70-year period, with their crimes covered up by the bishops. Those scandals reignited public anger and demands for accountability for bishops.

The Catholic clergy sex abuse scandals in 2018 "followed the MeToo movement, it followed a greater awareness of sexual violence in general, and it certainly pointed to the structural dimensions involved in covering up sex abuse," McCabe said.

In April 2019, McCulloh appointed the commission, which was composed of 12 people with backgrounds as pastors, theologians, psychologists, academics, medical students, Native Americans and lay ministers.

The group met more than a dozen times over 13 months, soliciting feedback through in-person meetings and via the commission's website. The commission's charge, according to the report, was "to identify, discuss, and make recommendations to the president regarding a set of formal actions" the university could undertake in light of the crisis and Gonzaga's institutional experience of clergy sexual abuse.

Before the commission began its work and later as it was wrapping up its draft recommendations in June 2020, Reveal — a weekly investigative reporting radio show and podcast — published two devastating reports on clergy sexual abuse cover-up that implicated the West Province and Gonzaga University.

The first report indicated that one notorious predator-priest, the late Fr. James Poole, who sexually abused Alaskan Native girls, and other abusive Jesuit priests were sent to spend their later years at the Cardinal Bea House, a retirement home on Gonzaga University's campus.

Following the second Reveal report, the commission's report says its members gathered for an unplanned meeting to wrestle with the content, which they said underscored the importance of their work.

"The commission members discussed if their draft recommendations needed to be revised, and they found that the recommendations still resonated, that they still pointed us in a direction that we felt still made sense at that point in time," Wheatley said.

The commission grouped its recommendations in five key areas; academics, memorials and liturgies, mission identity, policy and procedure, and tribal relations. One main recommendation was establishing a $10,000 annual fund for faculty research and scholarly activities related to the topic of sexual abuse in the Catholic Church.

McCulloh, the university president, adopted the recommendation and approved a minimum of $15,000 for the new Social Justice & the Catholic Sexual Abuse Crisis Fund. Beginning this academic year, faculty can apply for grants for independent research, bring scholars to campus or create other collaborative engagements.

"We're hoping to get people from across the university who maybe hadn't thought about addressing these issues before," McCabe said.

McKiernan, of BishopAccountability.org, said it is "not a bad idea" for a major Catholic university to tackle the sex abuse issue, but opined that the Gonzaga report "is almost a kind of perfect example of how not to go about this."

"They're pretending to take ownership, establish context, encourage accountability, when they're actually avoiding all of the above," he said.

A version of this story appeared in the Oct 1-14, 2021 print issue under the headline: Sex abuse report recommends actions.