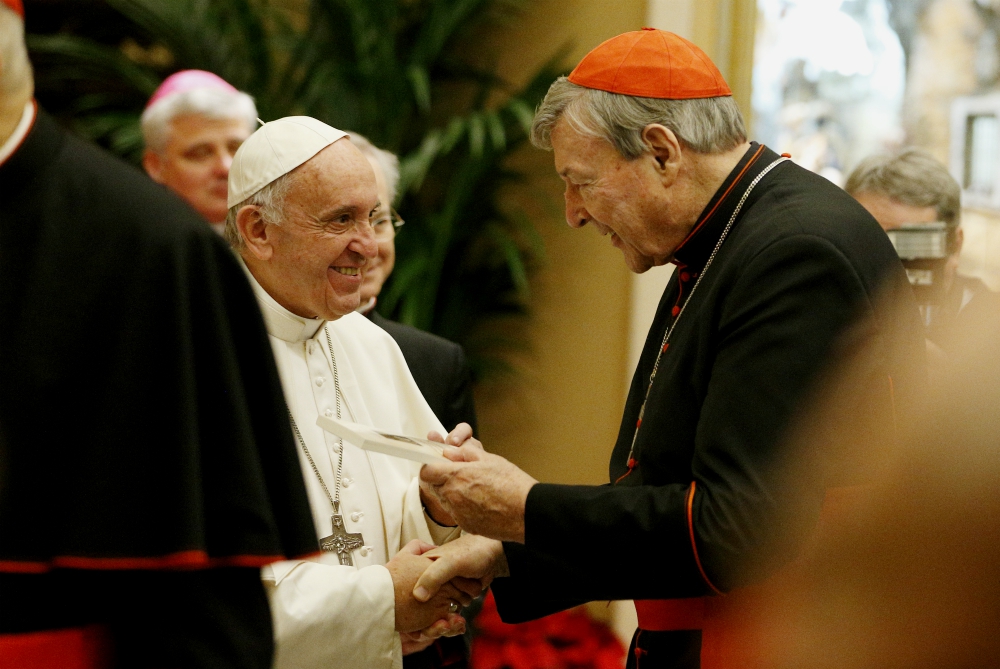 Pope Francis greets Australian Cardinal George Pell during an audience to exchange greetings with members of the Roman Curia in Clementine Hall of the Apostolic Palace at the Vatican Dec. 22, 2016. (CNS/Paul Haring)

About two weeks into his pontificate in March 2013, Pope Francis uttered a phrase that would quickly become one of his greatest hits in his canon of quotes: "This I ask you: be shepherds, with the 'odor of the sheep.' "

Francis spoke those words to thousands of clerics who had gathered at the Vatican for the annual chrism Mass, a liturgy traditionally held on the morning of Holy Thursday that celebrates the holiness of the priesthood.

The phrase became a common refrain for any progressive Catholic testifying to the promise of Francis' pontificate.

But the metaphor never sat well with me. Sure, Francis was suggesting that members of the clergy not stay aloof and removed from the people they serve. But what did it say about the laity? Are we a lost, unwashed and simple herd who were utterly dependent on our priests and bishops for guidance?

The metaphor of the Good Shepherd works great for Jesus. He is, Christians believe, fully divine, the Light of the World, the Alpha and the Omega. But the analogy strains to the breaking point under the weight of our all too human, fallible, and sometimes even criminal priests and bishops.

Francis, who has had many choice words for the culture of clericalism, betrayed his own clericalism in this metaphor. He suggested that there was something superior, something set apart, about priests and bishops.

Never has Francis' clerical disposition been on clearer display than in the way he has dealt with Australian Cardinal George Pell, who was found guilty on Wednesday, Dec. 12, on five charges of "historical child sexual offenses."

Within the first month of his pontificate, Francis had tapped Pell to serve on a new Council of Cardinals, nine advisers known informally as the "C9" or the pope's "kitchen cabinet." In 2014, Francis appointed Pell to a five-year term as prefect of the Secretariat for the Economy, a dicastery of the Roman Curia that has authority over all of the economic affairs of the Holy See and the Vatican City State.

But by early 2016, reports swirled that Pell was being investigated for sexually abusing children as a priest and later as an archbishop. In October 2016, three Australian police flew to Italy to interview Pell, who refused to return to Australia for questioning due to "ill health."

In June 2017, Francis granted Pell's request for a leave of absence from his responsibilities to the Secretariat for the Economy so that he could return to Australia to defend himself against the charges.

After a pretrial in May 2018, an Australian court ordered Pell to stand for two trials for multiple charges of the sexual abuse of minors: one for events in Melbourne in the 1990s and one for events in Ballarat in the 1970s. This week's conviction was for Pell's abuses in Melbourne. His second trial will take place in March 2019.

Amid these years of questioning, charges and trials, Francis has chosen to remain silent and keep Pell in his positions on the C9 and in the Curia.

According to Gerard O'Connell, Vatican correspondent for America magazine, "Francis applied the principle of law known as 'in dubio pro reo' ('doubt favors the accused'), insisting that a person is to be considered innocent until proven guilty. The pope did not remove Cardinal Pell from his Vatican posts then because he believed to do so would be equivalent to an admission of guilt."

Pope Francis leads a meeting of the Council of Cardinals at the Vatican in February 2017. At right is Cardinal George Pell and Cardinal Francisco Javier Errázuriz Ossa is second from right. (CNS/L'Osservatore Romano, handout)

Unlike in the U.S. church, where a credible accusation is enough to get a priest removed from ministry, in Francis' view even a shred of doubt about the guilt of a prelate is enough to keep him in power.

This isn't the first time that Francis has favored an accused member of his kitchen cabinet. Francis also kept Chilean Cardinal Francisco Errázuriz Ossa on the C9. He was accused of covering up for abusive priests while archbishop of Santiago, including the notorious predator Fernando Karadima, who was sentenced to a life of prayer and penance in 2011 and finally defrocked in September 2018.

Errázuriz was Karadima's "most powerful defender," according to a 2015 NCR article by Soli Salgado.

The article goes on to state, "The accusations against Errázuriz asserted that the cardinal was fully aware yet chose to ignore the abuse as early as 2003."

"I am the first to try and punish someone with these types of accusations," Francis said about Errázuriz at the time. "But in this case there is no proof — on the contrary. I say this from the heart. Do not be fooled by those who only look for fuss, who look for scandal."

The Karadima case would come back to haunt Francis in January 2018 when he vigorously defended Bishop Juan Barros, who Karadima's victims say witnessed the abuse. Francis made Barros a bishop in 2015.

"The day they bring me proof against Bishop Barros, I will speak," Francis said at the time. "There is not one piece of evidence against him. It is calumny. Is that clear?"

Though Francis would later apologize to Karadima's victims for essentially calling them liars, this was another clear case of the pope privileging abusive clerics over the abused laity.

Even amid all of this rot in his kitchen cabinet, Francis kept Errázuriz and Pell in their privileged places, waiting for civil authorities to decide their guilt or innocence before he saw fit to remove these men from their privileged positions.

It was only after Pell was found guilty on Wednesday that the Vatican decided to announce that both Errázuriz and Pell would no longer be serving on the C9. But even the announcement made it sound as if the pope was simply reorganizing his council, rather than suggesting that they had been removed due to any criminal or nefarious or sexually violent activities.

In fact, Greg Burke, director of the Holy See Press Office, said that Francis had written to the men in October thanking them for their service.

"That's a good question," said Burke, when asked at a briefing on Wednesday, just hours after Pell's conviction.

"The Holy See has the utmost respect for the Australian judicial authorities. We are aware there is a suppression order in place and we respect that order," he added.

Burke was referring to an Australian court order forbidding the media from publishing news about Pell's trial as a way to maintain impartiality.

But isn't being convicted of sexual abuse in one trial while awaiting a second trial on the same charges — two details that have been made public — enough to get one kicked out of the Curia? Apparently not in the Vatican's world of radical clerical privilege.

The bigger question is, why wasn't Pell removed the moment he was asked to stand trial, if not even earlier? It should never have taken this long, and it did because of Francis' approach to privileging the abuser.

In one of his many diatribes again clericalism, Francis said in a homily in December 2016:

There is that spirit of clericalism in the church, that we feel: Clerics feel superior; clerics distance themselves from the people. ... [It happens] when the cleric doesn't have time to listen to those who are suffering. ... The evil of clericalism is a really awful thing; it is a new edition of this ancient evil.

Francis' strategy of favoring the accused reeks of clericalism. It gives the clergy an odor of superiority and brazenly ignores the cries of those who have suffered horrific abuses. The next time Francis points a finger at the evils of clericalism, one hopes he'll notice the evils of Barros, Pell and Errázuriz, among many other prelates, pointing right back at him.