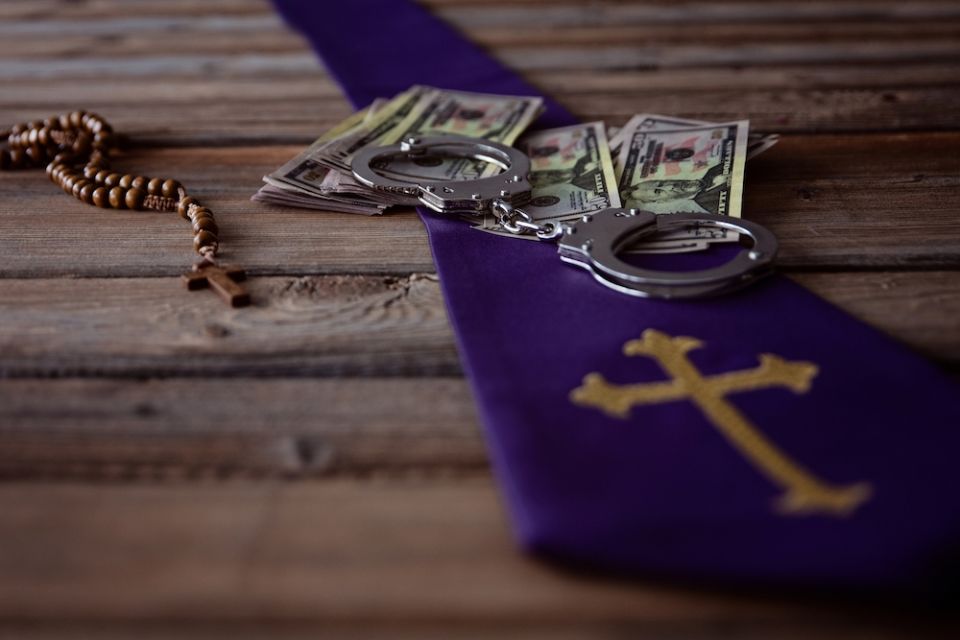 Last February, Fr. Lenin Vargas was indicted on 10 counts of wire fraud in the Northern District of Mississippi. In July, the Diocese of Jackson, which was also being investigated for its alleged inaction, agreed to tighten its financial controls under a deal it reached with the feds. (Dreamstime/Djedzura)

Fr. Lenin Vargas' request for money seemed more fitting for a spam email than from a Catholic priest.

From 2014 until 2018, Vargas allegedly solicited funds from parishioners at St. Joseph Catholic Church in Starkville, Mississippi, where he was the pastor, for what he claimed were expenses for his cancer treatment and for charities in his native country of Mexico. But according to a federal indictment, there was no cancer treatment. Vargas had HIV and his medical expenses were covered by his employer, the Diocese of Jackson. Still, Vargas was able to raise over $33,000.

Furthermore, the Diocese of Jackson failed to divulge the fraud, allowing Vargas to pilfer money for years, according to a report from the Clarion Ledger in Jackson, which cites an affidavit filed in federal court by Homeland Security Investigations, the investigative arm of the U.S Department of Homeland Security.

Last February, Vargas was indicted on 10 counts of wire fraud in the Northern District of Mississippi, according to court documents that were made available in July, the newspaper reported. If convicted, he faces up to 20 years in prison and $250,000 in fines.

In July, the Diocese of Jackson, which was also being investigated for its alleged inaction, agreed to tighten its financial controls under a deal it reached with the feds, according to the Mississippi Catholic, the diocesan newspaper.

As part of the deferred prosecution agreement, the diocese agreed to return the money to Vargas' alleged victims, form a review board to focus on ethical conduct, establish a hotline for callers to anonymously report any concerns to the diocese, revise collection processes and start a penal process against Vargas.

The odd episode — like the widespread sex-abuse scandal that has roiled U.S. dioceses for many years — marked another black eye for the church. But it points to the need for dioceses to pay attention to possible financial scandals as well as sexual abuse ones.

According to the affidavit, the Vargas affair goes back to 2014, when the priest tested positive for HIV. Afterward, Vargas told people that he had cancer, and then allegedly started to swindle parishioners at St. Joseph's and at Corpus Christi Catholic Church in Macon, Mississippi, where he was also pastor. According to the affidavit, the Diocese of Jackson became aware of Vargas' fundraising early in 2015.

The federal charges against the diocese were based on its alleged inaction.

But according to a statement from the diocese in November 2018, which it released after Homeland Security Investigations issued search warrants at St. Joseph's and the diocese's chancery, Bishop Joseph Kopacz, after receiving complaints about Vargas in 2015, ordered an audit of St. Joseph's finances and found the pastor was violating diocesan policy on donations. It placed constraints on Vargas' spending and told him to cease raising money unless he received prior approval from the diocese.

Despite the complaints in 2015, Vargas continued to solicit funds, claiming the proceeds were going to an orphanage and chapel in Mexico, according to the federal affidavit.

At least one parishioner defended Vargas, according to the Daily Journal, a newspaper in Tupelo, Mississippi.

Sue Allen, who was a parishioner at St. Joseph's and also coordinator of social justice ministry at Catholic Charities and who has since moved from Mississippi, said Vargas hid his HIV diagnosis out of fear that it would affect his ability to minister, and she told the Daily Journal that the charities Vargas allegedly was helping were real.

"We saw a slideshow of the orphanage," she told the newspaper.

Allen made her remarks in December 2018, a month after the investigation into Vargas' alleged misdeeds became public. Vargas was removed from ministry that December.

According to local reports, authorities corroborated evidence in the Vargas probe with four informants, at least three of whom are priests in the Jackson Diocese.

One of the informants was Fr. Rusty Vincent, who had served with Vargas at St. Joseph's. After the investigation became public, Vincent was transferred to St. Paul Catholic Church in Vicksburg, Mississippi, where he is still pastor.

Vincent reportedly had been concerned about the diocese's alleged lack of response to claims about Vargas.

"I was with [Vargas] for two and a half years, and I went to the diocese many times with issues about him, but nothing happened," Vincent told the Starkville Daily News. "There was someone that made it clear they didn't want me [in Starkville]. I found out a lot of stuff as I was there."

Vincent didn't return a phone call and emailed request for comment from NCR. The diocese said Vincent's transfer to Vicksburg was in the works before the investigation became public, according to Catholic News Agency. 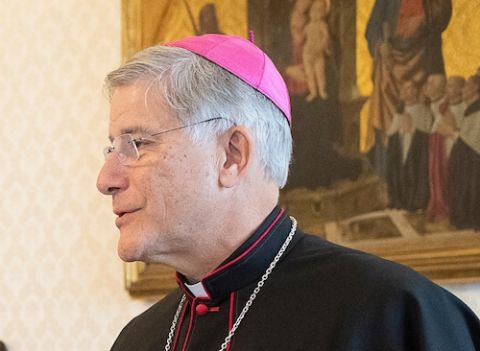 Bishop Joseph Kopacz of Jackson, Mississippi, pictured during a meeting of U.S. bishops from Regions IV and V at the Vatican, Dec. 3, 2019. (CNS/Vatican Media)

Many St. Joseph parishioners were upset at losing Vincent and sent a petition to Kopacz asking the bishop to keep Vincent at St. Joseph.

Kopacz didn't respond to interview requests that NCR made through a diocesan spokeswoman.

Another priest informant was Fr. John Bohn, who had served as pastor of St. Joseph from 2007 until 2013, when Vargas became pastor.

As a former pastor, Bohn heard rumblings about Vargas' alleged misdeeds from St. Joseph parishioners he kept in touch with, including claims that cash was stolen from the parish's weekly collection basket.

Another priest in Mississippi asked a federal prosecutor in Oxford about what should be done to stop Vargas, Bohn told NCR.

"That's when the whole thing blew up," Bohn said. He became an informant as well, explaining that he believes the church has not been good at investigating criminal behavior internally and so it was better to go to the authorities.

Vargas disappeared during the investigation and is believed to be in Mexico.

The affidavit claims Vargas used the money he raised for personal expenses. The Starkville Daily News reported that, according to informants, Vargas' trips to Mexico were troubling and Vargas was in communication with a man in Mexico named Sergio Picon, who according to investigators owned a bar in Vargas' hometown of Morelia, Mexico, called Heaven and Hell. The investigators through social media discovered that Vargas attended the bar's grand opening in the summer of 2018, the Daily News reported.

The report also said that federal investigators were told by PayPal, the online payment processing giant, that it received recurring payments from Vargas for a dating site, SuccessfulMatch.com, which contains a section, "Positive Singles," for those who have been diagnosed with sexually transmitted infections including HIV/AIDS.

Moving on with new reviews and rules

Hal Lanier, Vargas' attorney, said his client did not wish to talk about the case.

"These past years have been filled with so much pain that I rather not have to deal with a reawakening of the situation for the sake of my emotional and psychological state," Vargas said in a statement Lanier sent to NCR.

The federal investigation resulted in the indictment of Vargas that became public in July. The announcement of the indictment coincided with news that the Diocese of Jackson consented to a deferred prosecution agreement, a deal with the federal government that spells out conditions the diocese must meet in return for charges against it being dropped after 12 months.

In addition to the new ethics review board and hotline, the diocese has returned the donations and made staff changes at the chancery, naming a priest with an accounting background as vicar general. It also now requires second collections to be approved by the diocese first.

It also established a compliance board that first met in October. At the meeting, the board discussed ways "to ensure greater transparency and better communications between the diocese and parishes," a diocesan press release stated. Bohn, one of the priest informants, is on the compliance board.

The diocese has also hired a third party, Lighthouse, to process complaints. Lighthouse is a division of Syntrio, an Illinois-based company that provides online ethics and compliance training.

Lighthouse, according to the agreement between the diocese and the federal government, will forward complaints to a board that Kopacz, the bishop, formed in 2019 to "address abuse of vulnerable adults by church personnel." That board, the diocese says, will recommend to the compliance board actions to be taken against offenders and will report civil and criminal violations to local authorities.

In a statement in July to announce the deferred prosecution agreement, Kopacz said he expresses "deep regret for all who have been hurt by Lenin Vargas' actions. We still invite anyone to come forward with claims, and we will work to seek a just resolution for them."

Fr. Jason Johnston now serves as the pastor of St. Joseph, where much of Vargas' alleged fraud occurred. Johnston did not return requests from comment from NCR, but he told the Starkville Daily News, "For a lot of people, it has been trying. But, for the most part, we're getting along here at St. Joseph. We've been affected in a huge way, but I think we are trying to heal and move forward."

[Mark Nacinovich is a New York-based writer and editor, former managing editor of the Brooklyn Tablet; he has also written and edited for Catholic New York and the New York Post.]

Mark Nacinovich, a New York-based writer and editor, was formerly managing editor of the Brooklyn Tablet and has also written and edited for Catholic New York and the New York Post. He is a graduate of the University of Chicago.