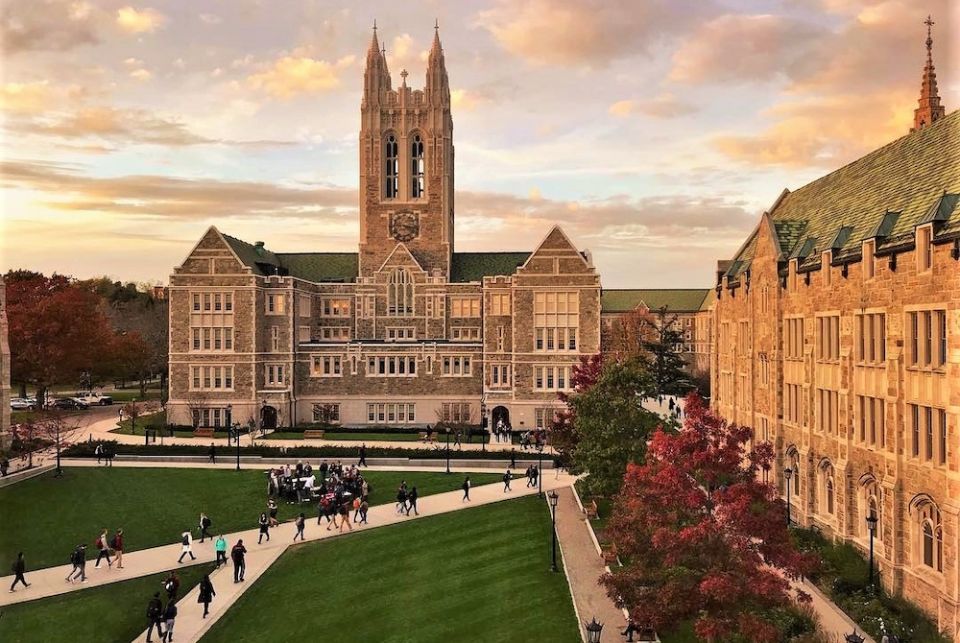 Editor's note: It is NCR's practice to permit anonymous attribution in only rare circumstances, usually when it's the only way to report important information or perspective. This is one of those times. Some identifying information has been removed.

Black college students and alumni have taken to social media to ensure that elite Catholic educational institutions face a reckoning on systemic racism.

Using Instagram, students and alumni are sharing their experiences — with prospective students, potential donors and each other — of what it is like for Black students to attend some of the country's most prestigious Catholic colleges and high schools.

In early June, in the wake of the killing of George Floyd, many Catholic colleges and high schools sent messages to their communities, pointing to their Catholic values as guideposts for fostering unity.

For example, Jesuit Fr. William Leahy, Boston College president, wrote in a June 2 letter: "Reflecting its Jesuit, Catholic heritage, Boston College insists that everyone should be treated with dignity, respect, and grace." Similarly, Mark Nemec, president of Fairfield University in Connecticut, wrote in a June 1 email: "Fairfield University is committed to a love of truth, to a respect for justice and to the loving compassion for the other that is our inheritance as a Jesuit institution."

As protestors marched in cities and towns across the country, Black students and alumni began launching Instagram accounts to provide evidence that those Catholic values are not always being met. Some accounts include dozens of individual posts, each featuring anecdotes from students.

In a June 22 statement posted to the Instagram account "Black at Fairfield," organizers explained that "the purpose of their page is to ensure that voices of students past, present and future are heard." The statement went on to criticize Nemec's email for completely downplaying "the extent to which racial discrimination takes place against Black students at Fairfield University."

"Every year when Black first-year students walk onto this campus for their orientation, they are told by the administration that if there is ever anything that goes wrong, there are an arsenal of people that want to make it right," the account "blackatbostoncollege" wrote in a June 19 statement. "However, Black students have repeatedly reported accounts of racism to the correct people to absolutely no avail."

"As our posts have shown, for decades, we have been denied the opportunity to speak our minds of how we feel. It is finally time to release ourselves from this trauma; a trauma which we have swallowed and suppressed, all the while convincing ourselves that it did not matter," the statement continued.

Blackatbostoncollege currently has over 11,000 followers.

NCR found similar "Black At" Instagram accounts connected to more than 10 Catholic colleges and universities including St. Louis University, DePaul University in Chicago, Providence College in Rhode Island, and the Catholic University of America and Georgetown University, both in Washington, D.C. There are more than 40 accounts dedicated to secular institutions as well.

The accounts are typically run by anonymous students and alumni of the universities. An organizer of the account "Black at Fordham" — a current graduate student who requested anonymity — told NCR via Instagram that anonymity is important because "people are being very vulnerable with us by sharing their stories."

"It's a platform for people to share their experiences. That's it. Our names are irrelevant," the organizer said.

Between the separate accounts and across individual posts, a number of common narratives present themselves. White classmates use racial slurs. White faculty minimize Black students' experiences, embarrassing them in class. Students of color are asked why they are on campus and told they don't belong.

Each account also paints a picture unique to its institution.

In New York City, the metal gates surrounding Fordham University's Gothic campus in the Bronx and the predominantly white student body have come under scrutiny on the "Black at Fordham" account. A number of posts describe how the same racism directed towards Black and brown New Yorkers living outside the gate often harms students of color inside it.

"As a Bronx native, I had been so excited to attend a university in my neighborhood but from the very start I felt out of place," a Fordham alumnus from the class of 2017 wrote in a June 28 post. "White students would remark on how disgusting the Bronx and its residents were. They made me feel like scum."

"The gates need to be torn down," another wrote in a July 13 post. "I've had guards ask me if I was a student after seeing me swipe [my ID card], physically block me from entering, and force me to justify where I was going. But none of this would bother me so much if the treatment of the white student body wasn't so radically different."

In a July 19 blackatbostoncollege post, an alumnus recounted being harassed by a security guard while studying in an on-campus building as a student. "What are you doing here?" the guard asked, apparently overlooking the student's textbooks. The student eventually reported the incident, despite fearing retaliation from the guard, to which a college official allegedly replied: "Boston College cannot prevent nor protect you from retaliation. The security officer handled the situation poorly, but there's not much that we can do."

Alumni of some prominent Catholic high schools have adopted the "Black At" strategy as well.

On July 6, a group of alumnae from Xavier College Preparatory — an all-girls high school in Phoenix — launched the Instagram account "BIPOC at Xavier" (BIPOC stands for black and indigenous people of color). Posts include alumnae expressing frustration with Xavier's administration for shutting down attempts to form a Black student union, as well as memories of a teacher using racial slurs, including the N-word.

Organizers from Alumni for Change, the group running the account, told NCR that Instagram is part of their broader strategy to pressure Xavier to take actionable steps to address racism. Social media raises awareness among parents, donors and the local media, they said.

"Our initiative is not about shaming the institution," said Julia Hammond, an Alumni for Change member. "We truly want them to acknowledge that there's a problem so we can fix it for the current students."

Official responses to "Black At" Instagram accounts have varied between institutions.

On July 10, Xavier sent an email to current students and recent alumnae committing "not to rest until our prayers and actions for healing and justice are heard." However, Alumni for Change found the response insufficient as it lacked any tangible action plans. Xavier did not get back to NCR for comment.

Jennifer Anderson, Fairfield University's vice president of marketing and communications, did not acknowledge "Black at Fairfield" when asked for comment via email. Anderson did say, "We are heartened by the progress Fairfield has made in these past few years," including increasing the enrollment of students of color and the number of tenure track faculty of color.

Boston College spokesman Jack Dunn told NCR in an email that the administration is "listening to the stories and recognize that we can learn much from them." However, Dunn said the postings "have been upsetting for individuals who are singled out in unattributed comments with no possibility of defending themselves. This is new terrain for us all."

The "Black at Fordham" organizer called McShane's letter a "good start." Still, they told NCR in a phone interview that they are disappointed the university has failed to acknowledge any specific incidents involving faculty members. But they understand change won't come all at once.

Black at Fordham was born out of a national reckoning moment generated by the murder of George Floyd in Minneapolis on May 25, which resulted in a wave of demonstrations across the country.

"All of a sudden people seemed to want to listen," the organizer said, "so we thought elevating the voices of Black students was more important than ever." Organizers say they're committed to this initiative for the long haul.

"We'll keep this going as long as people have stories to share."

Book uplifts the soul of a Jewish neighborhood after unspeakable horror

Black Catholics' history: Will US Catholic schools teach it?