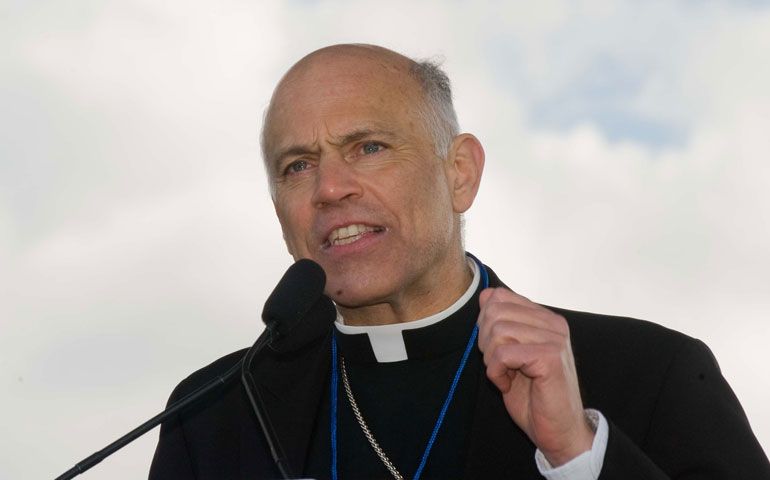 Archbishop Salvatore Cordileone of San Francisco addresses the crowd during the March for Marriage rally in Washington March 26, 2013. (CNS/Matthew Barrick)

The unprecedented United Nations interrogation of the Vatican regarding the scale of priestly child abuse is long overdue, but it remains to be seen how effective Pope Francis' child abuse commission will be. In the United States, aside from the unfolding story in Chicago, many questions about the lack of accountability of some American bishops must be answered before the Vatican child protection effort will have any credibility.

The Vatican was obligated to respond to the U.N. representatives because it is a 1990 signatory to the U.N. Convention on the Rights of the Child, which calls for all governments to take adequate measures to protect children. Rome ignored the requirements of this agreement and provided no annual progress reports for the last 18 years until 2012. But there is another story here.

While the Vatican blew off this U.N. mandate when it came to the sexual abuse of children, it took the agreement very seriously when it came to another matter. In 2003, the Congregation for the Doctrine of the Faith, then headed by Cardinal Joseph Ratzinger, issued an updated teaching against gay marriage. The teaching for the first time specifically prohibited same-sex couples from being adoptive parents, and cited the Convention on the Rights of the Child as support for the Roman prohibition. When it came to priests abusing vulnerable children, the agreement was ignored, but when it came to gay and lesbian couples adopting vulnerable children, it was run up the Roman flagpole. The irony is only exceeded by the hypocrisy.

In restoring church credibility, Francis can start by ensuring that the U.N. agreement is used to protect children and not discriminate against loving, nurturing adoptive parents. And if he wants to continue his compassionate and pastoral leadership, he should get rid of the harsh and disrespectful language in the 2003 Vatican document. In referring to same-sex couples, the Vatican language states, "Allowing children to be adopted by persons living in such unions would actually mean doing violence to these children."

The harshness and disrespect of the Vatican language is mirrored in the approach of some of our over-the-top bishops who oppose civil gay marriage. Springfield Bishop Thomas Paprocki conducted an exorcism after Illinois approved gay marriage. St. Paul-Minneapolis Archbishop John Nienstedt told a mother who asked him for acceptance of her gay child that her "eternal salvation may well depend upon" her accepting church teaching on homosexuality.

And then there's San Francisco Archbishop Salvatore Cordileone, energetically tilting at windmills all over the country in his failed effort to stop civil gay marriage. Cordileone has also spoken out aggressively against federal legislation prohibiting workplace discrimination against gays and lesbians.

In a presentation to a group of church communication directors in San Francisco last October, Cordileone urged them to not let proponents of gay marriage hijack the language of the debate. He doesn't want them to use the term "gay marriage." He also told the communication directors that when they are asked to explain their opposition to same-sex marriage, their response should be, "Why are you opposed to every child having a mother and a father?"

I don't know anyone, gay or straight, who is opposed to children having mothers and fathers. But I do know that there are hundreds of thousands of children in the foster care system in this country, and they are there because of the abuse and neglect of their heterosexual parents, and these "mothers and fathers" are living proof that sexual orientation has nothing to do with good parenting.

During a National Public Radio interview late last year, Cordileone said he has discovered that gays have "been disowned by their families. They've been harmed and they want to come to a place that will accept them for who they are. So it tenderizes us." Presumably he was attempting to respond to the pope's call for a softer approach toward gays and lesbians, but in his next comment he harshly condemned the Hawaii gay marriage law, thus making it clear that no matter how "tenderized" he may become, he is not buying off on equality nor backing away from condemnation.

Facts, political reality, the opinion of a Catholic majority, even a papal tone of compassion -- these factors don't seem to get in Cordileone's way. He is a single-minded, energetic advocate for his cause, a true believer, a nonstop culture warrior.

One could argue that Cordileone is only doing his job: The U.S. bishops, after all, appointed him to lead the fight against marriage equality. But he isn't alone in his zeal. Not to be outdone by Paprocki and Nienstedt, Detroit Archbishop Allen Vigneron declared last April that supporters of same-sex marriage should refrain from the Eucharist. Last month, the Catholic bishops of Kansas supported legislation that would prohibit government sanctions and anti-discrimination lawsuits when private companies cite religious beliefs as the basis for refusing to provide goods or services to legally married same-sex couples. (The legislation was withdrawn last month before a vote.) The Virginia bishops, in their losing battle on gay marriage, have vowed if the state attorney general won't defend a constitutional amendment defining marriage as "the union one man and one woman," they will. The material distributed by the bishops' conference to help parishes celebrate National Marriage Week (Feb. 7-14) is reflective of the hard-line position. Among other things, the package suggests arguments to refute the idea that campaigns for marriage equality have anything to do with human, political or civil rights.

This intense crusade against civil gay marriage calls to mind the cautionary words of the great American Protestant theologian Reinhold Niebuhr: "Frantic orthodoxy is never rooted in faith, but in doubt. It is when we are unsure that we are doubly sure."

Some American bishops seem to realize that they've lost the battle of civil gay marriage, that it's time to move on from a harsh, critical stance and begin instead to develop a more pastoral approach to gays and lesbians. These are the bishops we need to hear from, not the culture warriors who don't seem to know that this particular war is over.

Your thoughts on Cordileone barring Pelosi from Communion

What is really toxic in the new San Francisco teacher handbook