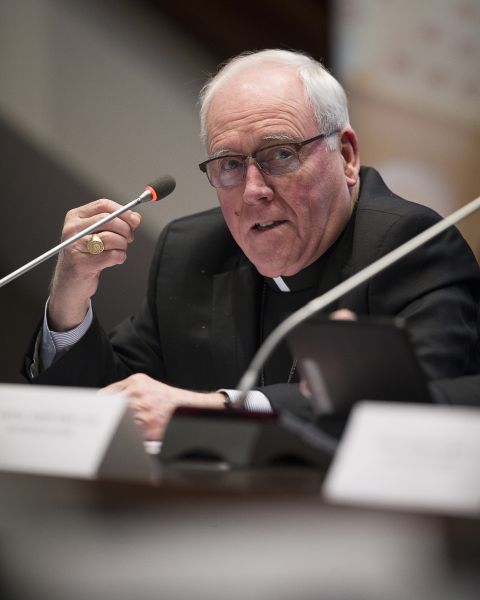 John J. Hurley, the first lay president of Jesuit-founded Canisius College, has become a key figure in an effort to reform the Diocese of Buffalo, New York, jolted by a string of sex abuse revelations and accusations of cover-up.

Hurley told NCR that he is lending his voice to those who "were horrified, disillusioned and frustrated" by the events of 2018, which left Buffalo Catholics reeling. Hurley has joined with eight other prominent local Catholics and donors who, calling themselves The Movement to Restore Trust Initiative, seek changes in the diocese. Canisius has served as a center in the area for those interested in church reform, sponsoring a seminar on the issue and offering its facilities for workshops organized by The Movement to Restore Trust Initiative.

While the events of 2018 reverberated all over, culminating in the revelations regarding disgraced former Cardinal Theodore McCarrick and the release of a Pennsylvania grand jury report detailing hundreds of cases of clerical sex abuse, Buffalo Catholics had reason to feel battered.

Once seen as having largely escaped the scandal's impact, in 2018 Buffalo Catholics learned:

It was, said Hurley, a case of "wave after wave of bad stories," which "didn't square with people's understanding and what we had been told by previous bishops."

Catholic colleges are usually seen as being on the sideline of diocesan concerns. But, said Hurley, president of Canisius since 2010, "these are the kinds of things we do. We promote a search for truth."

Hurley has been active in developing Buffalo neighborhoods, particularly those close to the campus. He is a graduate of Canisius and the University of Notre Dame Law School. An attorney, he has worked for Canisius in various administrative posts since 1997. He made headlines in the Buffalo area by publicly supporting a Canisius College student and track athlete who came out as lesbian.

Hurley was quick to caution that the college was not sponsoring any particular movement or cause for reform. "We are a Catholic institution but we are not the Catholic church," he said. But he did receive permission from his board of trustees before embarking on his personal involvement. He said he was convinced that the college's involvement "couldn't just be an academic exercise" and that it was positioned to bring concerned Catholics together.

The Movement to Restore Trust Initiative, is led, along with Hurley, by his wife Maureen, a former executive of Rich Products Corporation; Paul D. Bauer, a retired financial executive and co-founder of the BISON Children's Scholarship Fund; Thomas R. Beecher, Jr., an attorney and co-chair of the diocesan endowment campaign; Robert M. Greene, an attorney and chair of the Catholic Health System Board and former chair of Bishop's Council of the Laity; Carl J. Montante, Sr., president of Uniland Development Company and former chair of the Canisius College board; Mary Travers Murphy, executive director of the Family Justice Center of Western New York; Dr. Nancy H. Nielsen, senior associate dean at Jacobs School of Medicine at the University at Buffalo and former president of the American Medical Association, and Nancy W. Ware, founder and president of EduKids, a childcare provider in Western New York and member of the Canisius College Board of Trustees.

A Nov. 28 seminar at Canisius began the discussion which was followed up by a Dec. 6 conference which included speeches by sex abuse survivors.

The Movement to Restore Trust Initiative has been subdivided into six task forces. Those groups are focused on the handling of sex abuse cases in the Diocese of Buffalo; financial transparency in the diocese; the role of laity, particularly women, in church leadership; the laity's role in the selection of bishops; the monitoring of bishops by the laity and changes needed in seminary training and formation.

A message supportive of the group from Malone was read at its Dec. 6 conference. Hurley said The Movement to Restore Trust Initiative has not called for the bishop's resignation and has no position on that issue, which has been raised by some Buffalo Catholics. Hurley said the group will issue a report and recommendations in February.