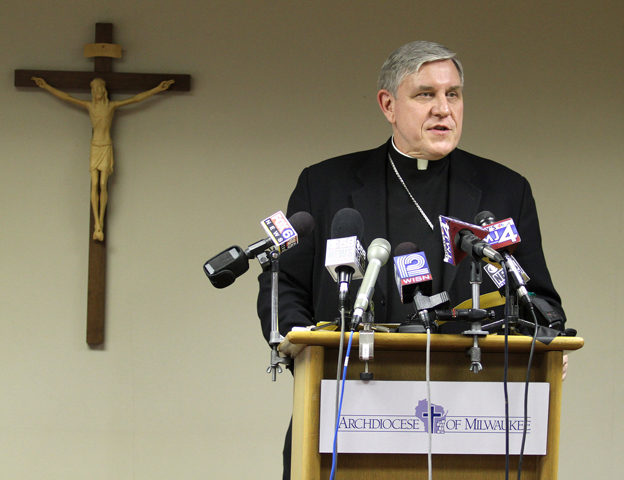 Milwaukee Archbishop Jerome Listecki addresses a press conference at the Cousins Center in St. Francis, Wis., Jan. 4, 2011, after announcing that the archdiocese will file for Chapter 11 reorganization of its financial affairs under the U.S. Bankruptcy Code. (CNS/Allen Fredrickson, Catholic Herald)

It took less than two hours for a federal judge to approve a plan that will allow the Milwaukee archdiocese to emerge from Chapter 11 bankruptcy after nearly five years of legal battles.

Archbishop Jerome Listecki spoke briefly Nov. 9 in a courtroom packed with sexual abuse survivors and more than 20 lawyers. Listecki praised the abuse victims for coming forward, saying they had raised the consciousness of the archdiocese and elsewhere.

"There is no resolution that will bring back what they have lost," said Listecki, adding that he hopes the confirmation of the plan will turn the corner for the archdiocese, allowing it to focus on charitable, educational and spiritual work. "When we have a strong church, we have a strong community."

One survivor, Mark Atkinson, stood up in court and questioned why it took so long for the archdiocese to deal with the issue.

"I went to the archdiocese in 1993 and nothing changed until 2002," Atkinson said, adding that the archdiocese was covering up the scores of allegations that had come forward. "Why did we have to wait until 2002?"

Later, he told NCR that he is not convinced that the archdiocese is sincere. "They promise changes, but I don't see them," Atkinson said. "What happens if it gets covered up again?"

Clearly, many of the survivors who filed claims with the archdiocese were unhappy with the settlement. One of the men who were abused as a child, who wished to remain anonymous, put it this way: "A lot of people think it was about money. It was about justice and there was not justice in this courtroom."

While the plan provides $21 million for victims, survivor and chairman of the creditors committee Charles Linneman said victims will only get about $14 million. Most, he said were represented by state court lawyers who have been working for years on a contingency basis -- meaning they only get paid between 30 and 40 percent of what their clients receive in judgments or settlements.

Meanwhile, the bankruptcy lawyers representing both sides will get about $20 million. Another $4.5 million was paid to lawyers representing the controversial trust fund for the perpetual care of nine archdiocesan-owned cemeteries. Survivors say the actual amount paid in legal fees is about $32 million.

Of the 575 survivors, about 120 will receive $2,000 each; 336 will share what remains and the remainder will get nothing.* The archdiocese reviewed the claims and assigned them to the various categories, a procedure criticized in court by survivor Steven Schmidt.

While 93 percent of those in the group who will get larger settlements voted to approve the plan, only 61 percent of the group receiving the smaller amount approved it.

Related: Winners and losers in the Milwaukee archdiocese's bankruptcy settlement

Initially, Schmidt -- who was identified in court as P9 -- was placed in the category of those who would receive nothing because he could not identify his abuser by name. After Schmidt filed a formal objection with the court, the archdiocese identified his abuser.

Schmidt questioned how thoroughly the archdiocese had looked for unnamed offenders, thus denying some victims payment. Schmidt said someone other than the archdiocese should evaluate the claims.

"They knew who these offenders were and covered up their crimes," Schmidt told NCR. "If you cover up the crime, you shouldn't be allowed to investigate it."

A dozen survivors gathered on the steps of the courthouse and vowed to continue their fight for justice.

Through an interpreter, three deaf men who were abused as children by a priest at St. John's School for the Deaf in St. Francis, Wis., said they asked Listecki to go to Rome with them and meet with the pope.

Peter Isely, the Midwest director of Survivors Network of those Abused by Priests (SNAP) and one of the first Milwaukee victims to come forward more than 25 years ago, called the amount of money that the lawyers will receive "obscene." He charged that about 100 priests named in the claims filed by victims remain unnamed by the archdiocese and called for an investigation of financial fraud, particularly that involving the transfer of some $57 million into a trust fund for the perpetual care of the archdiocese's cemeteries.

In court, Francis LoCoco, a lawyer for the archdiocese, said his clients had followed the U.S. bishops' Dallas Charter, relating to the handling of sex abuse cases. LoCoco said that all allegations had been sent to local prosecutors and, in the case of religious order priests, to their religious superiors.

"I expect one or more names [of abusers] will be added to the list," he said.

As for the fraud allegations, the archdiocese filed for bankruptcy protection in January 2011, but Archbishop Timothy Dolan, who was named head of the New York archdiocese in 2009 and a cardinal in 2012, had been talking about the possibility of filing for bankruptcy as early as 2004.

The $57 million was moved from the general fund into a trust fund shortly after the Wisconsin Supreme Court opened the door to lawsuits against the church for "fraud": The church could not be sued for the negligent supervision of its priests but it could be sued if it knew a priest was abusive and did nothing to warn potential victims, a fraudulent act.

Faced with several lawsuits poised for trial in state court in 2007 and perhaps dozens more in the wings, money was moved from the archdiocese's general fund into the cemetery trust. Years later, thousands of pages of secret records were released by the bankruptcy judge, Susan V. Kelley.

Among those documents was a letter from Dolan to the Vatican in which he said, "I foresee an improved protection of these funds from any legal claim and liability," if the transfer were approved.

Dolan's letter and the Vatican's rapid approval of the plan made international headlines. In an editorial, The New York Times called the revelations "shocking."

The issue of whether Dolan committed fraud when he moved the money will not likely be answered, according to legal experts who have been following the case. They said the $16 million contribution from the cemetery trust fund ($3 million of it in the form of a loan to the archdiocese) makes the issue moot.

"The whole idea of bankruptcy is to get rid of your debts and deal with the issues that put you in the position of having to file for bankruptcy," said Ralph Anzivino, a Marquette Law School professor with expertise in bankruptcy. "Ultimately, the issue of fraud was never legally resolved. After the agreement, it was of no procedural value."

Pamela Foohey, an associate professor at Indiana University Maurer School of Law, agreed but added that because the settlement includes some $16 million from the cemetery trust fund, $3 million of it a loan to the archdiocese, the money was included in the plan for settlement. "It is a completely appropriate and desired use of the [bankruptcy] process," said Foohey.

Still, Isely and members of his group questioned why the U.S. trustee's office didn't act.

"It seems very clear to us that the trustee's office was created and is mandated by Congress to ensure that no fraudulent or criminal acts occur before or during the course of Chapter 11," said Isely. He asserted that the trust was created, in part, to prevent courts from compensating victims of clergy sex abuse.

"There seems to be sufficient evidence and justification, we believe, to warrant an investigation," he said.

Michelle Cramer, a trial lawyer with the regional trustee's office, was in court Nov. 9, as she has been for most of the hearing, but said nothing. Her boss, David Asbach, confirmed that he met with Isely and others from the group but said he could not comment on the case or on whether he made a referral to the U.S. Attorneys Office for prosecution.

The transfer of the money was unusual, said Jack Ruhl, a professor of accountancy at Western Michigan University who has extensively studied Catholic diocesan finances. He told NCR that he's never seen a "reclassification" of funds like this one, although one California bishop was scolded by a bankruptcy judge for not being forthcoming with financial data, and the Minneapolis-St. Paul archdiocese had renamed a fund, making it the property of parishes, before filing for bankruptcy.

"It probably has been done in the past in other dioceses, but it's hard to detect," Ruhl said. "They don't have to release any financial data and what is released is not useful."

Ruhl also said the lack of information on how the Milwaukee archdiocese arrived at the amount of money needed for the perpetual care of the cemeteries was not transparent. "I found no explanation in the court documents for how they arrived at that number," he said.

He also attempted to get financial information on 1,900 Catholic cemeteries in the country on operational costs and how much was set aside for future care. "Only one or two had budgets and those were not very helpful," he said.

In court Nov. 9, the judge asked lawyers to make final changes to the proposed order and said she would sign it.

*The number of survivors who will receive nothing from the settlement was inaccurate in an earlier version of this story.