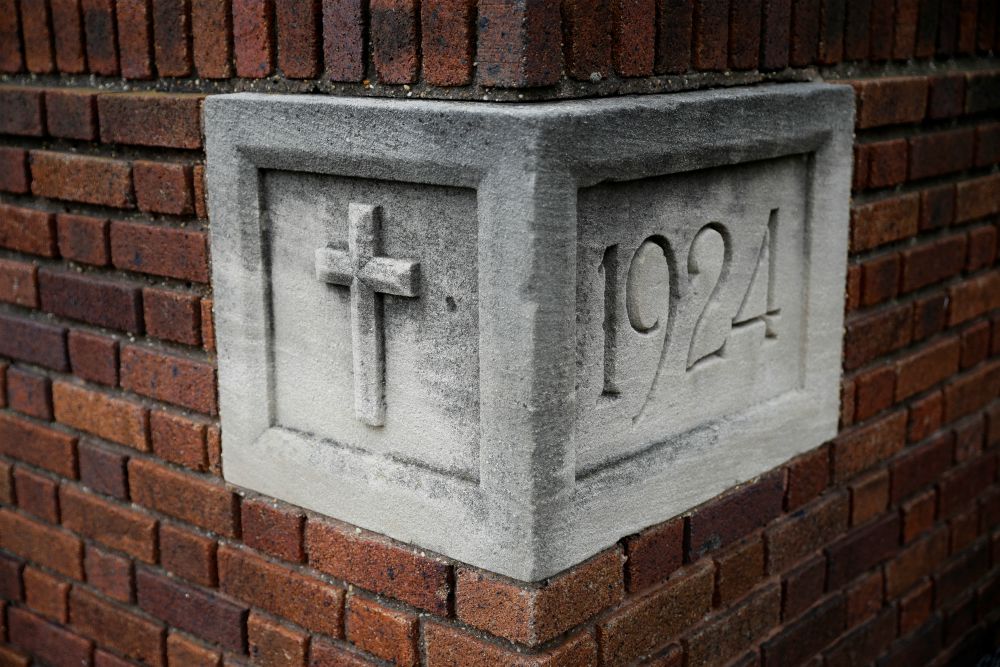 A building marker outside Divine Redeemer Catholic Church in Mount Carmel, Pennsylvania, in the Diocese of Harrisburg, one of the dioceses cited in the Pennsylvania grand jury report released Aug. 14 (CNS/Reuters/Carlos Barria, Reuters)

Pennsylvania is bad enough. What if the other 49 shoes drop?

Will other U.S. attorneys general follow Pennsylvania's lead? Will they launch investigations? Will they rid of us these troublesome priests … and bishops?

Probably not. Even as we reel in heartsick disbelief at staggering stories, the problem's roots may be too deep.

We must assume decay began long before the Pennsylvania report's 1947 start date. In the U.S., as elsewhere, a generational infestation now exhibits its epic proportions. Too many priest-abuser's stories begin with their own abuse at the hands of a priest or priests.

Maybe we should have paid more attention to last century's priestly exodus. Many priests left to marry. Many others simply left. Why? Not all who remained are dishonest, but what honest man could maintain sanity and remain silent if he knew bishops and others hid more than simple shenanigans? For years.

Today, we know more about problem priests and bishops — from pederasts to ephebophiles to philanderers and more — all over the world. Electronic media immediately spreads the word. The removed cardinals in Scotland and the U.S., bishops in Mexico and Guam, priests everywhere no longer hide behind a curtain of time, space and language. The church universal is a victim of its own internationality, and everything is landing — quite publicly — on Pope Francis' desk.

The people of God, the 1.2 billion Catholics in the world, want answers and want them now. Actually, they want them yesterday.

But the church does not and cannot respond that quickly; Pope Francis is not about to fire bishops using Twitter. In Spain, El Diario reports he has removed Cardinals George Pell of Australia and Francisco Errázuriz Ossa of Chile from his C9 group of cardinal-advisers, but it took a while. Pell is under indictment in Australia; Errázuriz told the pope the Chile stories were all lies.

The pope is doing what he can. He began by digging into church finances. He closed or collapsed some of its bloated bureaucracy. He regularly requests, and gets, resignations from ne'er-do-well bishops. He appointed women as consultors and commissioners in important areas.

At least Francis recognizes the church is not only its clergy.

Yet large pockets of the U.S. episcopacy are caught in a tone-deaf, whirling denial of the right. Following release of the Pennsylvania report some, notably former Pittsburgh priests, now Cardinals, Daniel DiNardo and Donald Wuerl, suggested a panel of bishops should investigate the U.S. church. Of course, the laity will be involved. …

Excuse me. Who controls this "investigation"?

Remember former FBI agent and Oklahoma Gov. Frank Keating, first chair of the USCCB sex abuse commission? Remember how he resigned, likening some U.S. bishops to the Mafia? He wrote: ''To resist grand jury subpoenas, to suppress the names of offending clerics, to deny, to obfuscate, to explain away; that is the model of a criminal organization, not my church.''

Other countries have placed their legal systems in the service of the good. In Australia, retired Archbishop Philip Wilson of Adelaide will spend a year in his sister's home wearing a tracking device. The point is not the sentence or its conditions. The point is that an Australian magistrate and jury found him criminally liable for using some Pennsylvania bishops' tactics:

You have to wonder whether every diocese has enough archival evidence to convict a bishop or three. I do not know the answer; I do know that evil lurks in every corner of the church.

As the Pennsylvania grand jury report stated: "Now, we know the truth: it happened everywhere."