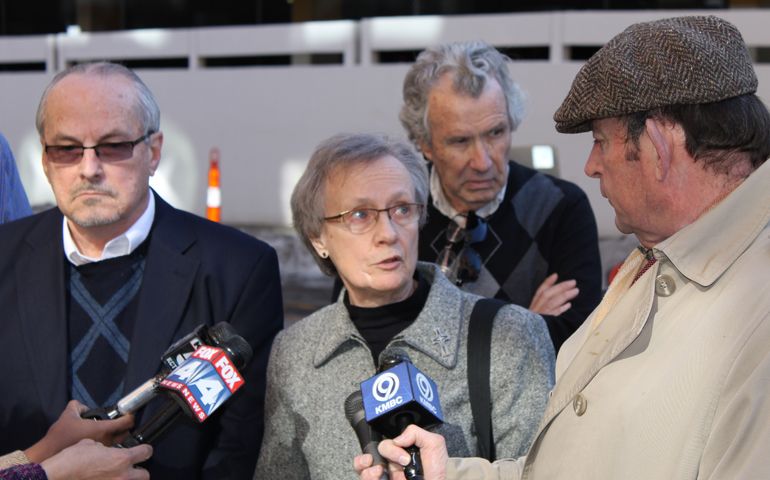 "Civil law has done what civil law can do. The church has done nothing in terms of calling Bishop Finn to accountability. He continues as bishop as if nothing really ever happened," said Mercy Sr. Jeanne Christensen, a former victims' advocate for the diocese co-heading the appeal. She spoke at a press conference Monday outside the diocesan offices.

In September, Ratigan was sentenced to 50 years in prison on child pornography charges; a year earlier, a Jackson County, Mo., court convicted Finn of a misdemeanor for failing to report and sentenced him to two years of probation. To avoid a similar charge in Clay County, Mo., Finn entered an agreement that requires him to meet monthly with the county prosecutor for five years.

"This lack of action by the Catholic Church to do justice and to repair scandal contributes to the ongoing scandal among the faithful that is a result of the Catholic clergy sexual abuse crisis," wrote Fr. James Connell in the formal appeal.

Connell, a retired Milwaukee priest and member of the Catholic Whistleblowers victims' advocacy group, acted as the catalyst to the appeal and contends that Finn's actions -- or inactions -- violate ecclesiastical law and thus requires some form of church response. However, he refrained from suggesting an action to the pope, instead limiting his request that an investigation begin.

In the petition, Connell argues that Finn's failures in the Ratigan case to protect children create a poor example others could follow, and in addition, "could lead other people to alter their faith life and their religious practices."

For Jim McConnell, the alteration was abandoning his preparation for the permanent diaconate a week before his ordination. Speaking at the press conference, he said he spent five years preparing to become a deacon for his parish of 30-plus years, Holy Family Church, in Kansas City.

As the Ratigan news began to emerge in May 2011, McConnell requested a meeting with Finn "to discuss my disillusionment about the handling and mishandling" of the case by the bishop.

"After a one hour discussion with Finn, I told him that I could not go before him and promise respect and obedience as required for ordination because I told him I had lost respect for him," McConnell said.

He said much the same in a note in his parish bulletin announcing his decision at the time, saying it came "after a great deal of soul searching, prayer and reflection ... To me this breakdown in the system that was put in place to protect God's children is inexcusable."

"That's scandal," the Milwaukee priest Connell commented. "... He might have a vocation from almighty God to be a deacon. ... This is not a minor thing."

In his letter to the pope, Connell outlined the canonical justifications for a penal review, specifically citing canons 1389 and 1399. Canon 1389 states that person who abuses ecclesiastical power or is culpably negligent "is to be punished with a just penalty," which can include the privation of office. Canon 1399 adds that a violation of canonical law warrants a just penalty "only when the special gravity of the violation demands punishment and there is an urgent need to prevent or repair scandals."

Speaking to NCR Monday, Connell said unlike the common definition of "scandal," in the church, the term refers to "an action or an omission that causes someone to sin, alter their faith practice or do something they should not be doing." For McConnell, it meant ending his pursuit of his diaconate vocation; for other area Catholics, several of whom wrote letters included in the appeal dossier, their disenchantment highlights the fallout of the Finn case.

After the bishop's conviction, Liz Donnelly said she felt she could no longer contribute to her parish's collection and ultimately left the church for a United Church of Christ community. Others wrote they, too, halted their financial support. In other cases, the response was sacramental.

"I have had to sit back and watch as Bishop Finn is allowed to confirm the very children he swore to protect, but didn't," wrote Sarah Harrison of Kansas City. "When the pastor of my church asked for permission to confirm the children of families that were not comfortable with the Bishop confirming their kids, [Finn] refused."

"It's an embarrassment to say this man confirmed one of my children," wrote a woman who was among the signees to the Change.org petition begun by Jim Weis of Kansas City -- who also wrote a letter for the appeal -- that has garnered more than 113,000 signatures from around the world calling for Finn's removal.

"My children went to Catholic school but I will not send my children or my money to the Catholic Church as long as Finn is still the bishop," said another signer.

"I plan to send my yet-to-be-born child to a Catholic school and I refuse to do so under the leadership of Bishop Finn," said a mother.

Such a dynamic that pits the hierarchy against the people resulted from the church's attempt to manage rather than punish misconduct, said McConnell, who joined the appeal effort after seeing a lack of action since Finn's conviction.

"It becomes an 'us versus them' scenario," McConnell said. "This causes disunity and weakens the mission of the church, which is to spread the Gospel for the salvation of souls."

"If he wants to heal and help get rid of the hurt he caused in this diocese by his actions, he will resign and leave the diocese," he said.

Christensen, too, prefers Finn resign, but clarified that such a position is not an attack against the bishop but one seeking justice. When asked if a lesser penalty, such as a suspension, would represent an adequate response, she said it would at least represent "a step forward, so you say, 'OK, they heard what we said, they took some action.' "

She said the appeal represents the most optimism she and others have had that the church might address the situation. She said she hopes the latest effort will keep the issue at the forefront, afraid that if nothing happens before Finn's probation ends later this year, nothing will happen at all.

"We don't want this to disappear, and if we don't continue to talk about it, he'll be done and it won't have cost him," she said at the press conference.

Connell said he could not handicap the probability of a Vatican response, but said he will continue to steadfastly monitor its progress. He mailed two copies of the appeal documents (his letter, those from parishioners, and Finn's court records) to Archbishop Carlo Maria Vigano, the apostolic nuncio to the U.S., with instructions to forward one to the pope via diplomatic pouch -- an expedited method for transporting official correspondence between foreign offices. Additional copies were sent to Finn and St. Louis Archbishop Robert Carlson.

As of Monday, Vigano had not indicated he had sent the package to Rome. Should things remain silent after a few months, Connell said he will have to "make some more thunder. We can't let this sleep."

As for what that next step is, the priest wasn't sure but was more certain of the necessity to keep vigilant.

"I've got no set formula that's in place other than we all got to keep watching it. It's for the good of the church, the good of the people, to protect the children," he said.