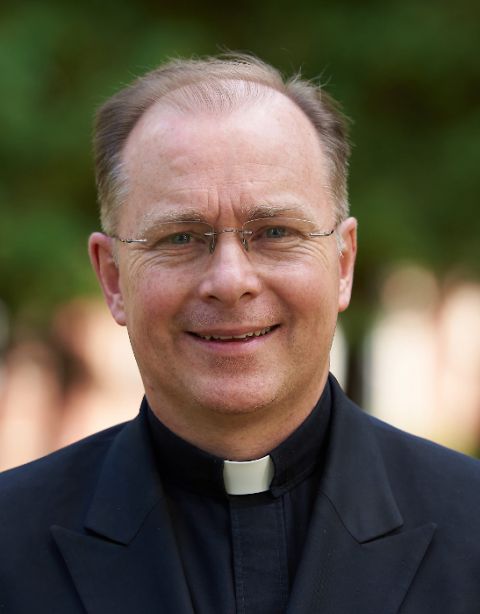 U.S. Father John O'Connor, the newly elected superior general of the Legionaries of Christ, is pictured in an undated photo. In a Feb. 26, 2020, news release, Father O'Connor pledged to investigate all past credible claims of the abuse of minors by its members, no matter how long ago the abuse occurred, and to publish the names of all priests who have been convicted of abuse-related crimes. (CNS/Legionaries of Christ)

Rome — The Legionaries of Christ has pledged to investigate all past credible claims of the abuse of minors by its members no matter how long ago the abuse occurred and to publish the names of all priests who have been convicted of abuse-related crimes.

U.S. Father John O'Connor, the newly elected superior general, said in a press release Feb. 26 that he and his council "will vigorously pursue the investigation and determination of responsibility for each of the cases of past abuse," specifically those listed in a report the congregation released Dec. 21, 2019, about known cases of sexual abuse of minors and vulnerable adults from 1941 to 2019.

The congregation furthermore publicly asked forgiveness from victims, officially retracted "the negative judgments" made against the victims and thanked them "for their courage and for the good they have done for the Legionaries of Christ and for the Catholic Church," it said in the same press release, which was published online.

"The renewal, through which the Holy See has led us in past years, has prepared us to take responsibility for the consequences of our history," Father O'Connor said. Now aware of lessons learned "we have decided to keep taking decisive steps to advance on a path on which there is no turning back."

Concrete steps in that renewal were established in two key documents dealing with safeguarding and healing that the Legionaries of Christ issued Feb. 26 during their general chapter, which has been meeting in Rome since Jan. 20.

The first document, titled "Protect and Heal," is a 21-page decree officially establishing clear principles, policies and norms for the protection of minors and vulnerable adults in all institutions run by the Legionaries.

The norms cover mandatory structures and procedures for reporting and investigating suspected cases as well as emphasizing there will be sanctions for those guilty of negligence or the cover-up of abuse.

The new regulatory measures are meant to expand on and strengthen the Safe Environment Policy promulgated by the 2014 general chapter, and to improve and expedite the way the congregation responds to new claims. The new norms become mandatory for all congregation members and institutions as of June 1.

However, they also include commitments to assisting survivors and "investigating and clarifying cases of abuse from its past in order to reach out to those affected and restore justice," the document said.

Not only will allegations that were not properly addressed in the past be submitted to civil or church authorities for investigation, any evidence of "a crime of concealment or grave negligence" will be reported to the proper authorities, it added.

Members and institutions of the Legionaries cannot impose confidentiality clauses on victims, and they must report probable, suspected crimes to civil authorities and fully cooperate with them, the regulations say.

The Legionaries will inform all members and make public proven cases of sexual abuse by its members. They also said they will consider authorizing the publication of the names of former or deceased members who were never convicted by either the church or the state, but there is a "moral certainty" of their guilt and the additional transparency would help protect others, it said.

It said, "priests who were not tried in a formal process in the past and who, after investigating the facts, are found to have committed a notorious and undoubted crime or to have admitted their participation in a crime, the case will be presented to the Holy See requesting that the statute of limitations be lifted in order to initiate the due canonical process."

The second document, titled "Conversion and Reparation," is a 10-page "communique" addressed to all members, pledging the start of a new "mindset" and culture of empathy, conversion, reparation and justice through concrete action and change.

It also addresses all survivors and their families, asking for their forgiveness and officially retracting the negative "judgments" lodged against people "who made legitimate and necessary accusations," recognizing their voices as being "prophetic" in favor of truth and justice.

It specifically named several people who had been reporting in vain for decades abuse by its disgraced founder, Father Marcial Maciel and other Legionaries. Though reports go back at least to 1954, it was not until 2010 that the Vatican announced its findings that Maciel, who died in 2008, had been guilty of "seriously and objectively immoral behavior" and "real crimes."

The document calls on every member to conduct a continual personal examination of conscience, asking whether they: listen to and thank survivors; acted against the truth; harmed people's dignity through "lack of empathy, pretense, propaganda, lies, manipulation, any other type of abuse"; and contributed positively in some way to eradicating the abuse of minors and repairing injustice.

"No matter how many concrete steps we take, and no matter how much we delve into the past and bring to justice all those involved, we must accept the shortcomings of our actions, and persevere on the path of conversion and reparation, trusting in God's mercy," it said.