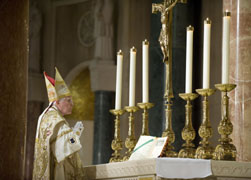 Bishop Edward J. Slattery of Tulsa, Okla., celebrates a solemn high Mass in the extraordinary form at the Basilica of the National Shrine of the Immaculate Conception in Washington April 24. (CNS)

WASHINGTON -- More than 3,500 people crowded into the Basilica of the National Shrine of the Immaculate Conception April 24 to attend the first traditional Latin Mass in decades to be celebrated at the high altar there.

Sponsored by the Paulus Institute for the Propagation of Sacred Liturgy, the Mass in the extraordinary form was celebrated by Bishop Edward J. Slattery of Tulsa, Okla., in honor of the fifth anniversary of the papacy of Pope Benedict XVI.

Close to 100 priests and seminarians assisted at the nearly two-and-a-half-hour pontifical solemn high Mass that was sung entirely in Latin. Cardinal William W. Baum, a retired archbishop of Washington, also attended the Mass, which was celebrated with ancient chants and with pomp, splendor and majesty.

During the Mass, the faithful prayed that God would "look mercifully upon thy servant, Benedict" and asked that "by his word and example he may edify those over whom he hath charge, so that together with the flock committed to him, may he attain everlasting life."

Although the Maryland-based Paulus Institute has been planning the Mass for three years to honor Pope Benedict, it generated negative publicity in the week leading up to the celebration. The originally scheduled celebrant, Colombian Cardinal Dario Castrillon Hoyos, was criticized for writing a letter in 2001 as the head of the Vatican's Congregation for Clergy, praising a French bishop for not reporting an abusive priest to authorities. In response to the controversy, the Vatican emphasized that bishops are expected to comply with all civil laws that mandate reporting of sex abuse allegations and to cooperate in civil investigations.

The Paulus Institute announced April 21 that in consultation with Cardinal Castrillon, it decided to seek another celebrant for the Mass.

Members of the Chicago-based Survivors' Network of those Abused by Priests had planned to protest Cardinal Castrillon outside the shrine but did not do so after the choice of Bishop Slattery was announced.

In his homily, delivered in English, Bishop Slattery did not speak directly about the controversy or recent criticism of the pope, but he did not ignore it.

"We have much to discuss, you and I -- much to speak of on this glorious occasion when we gather together in the glare of the world's scrutiny to celebrate the fifth anniversary of the ascension of Joseph Ratzinger to the throne of Peter," he said.

He added that pain and suffering "could dehumanize us, for it has the power to close us in upon ourselves such that we would live always in chaos and confusion, if we do not remember that Christ -- our hope -- has been raised for our sakes."

Bishop Slattery urged the faithful to turn to God in times of suffering because "he makes himself most present in the suffering of his people." God's saving presence and infinite love, the bishop said, "can never be overcome by the darkness, no matter how thick, no matter how choking."

He said suffering -- "yours, mine, the pontiff's" -- is "the heart of personal holiness ... It is the means by which we are made witnesses of his suffering and sharers in the glory to come."

"Do not be dismayed that many in the church have not yet grasped this point, and fewer still in the world will even consider it," Bishop Slattery said. "You know this to be true -- and 10 men who whisper the truth speak louder than a hundred million who lie."

Noting that the celebration and the controversy that preceded it has drawn much attention, the bishop offered advice to those at the Mass.

The April 24 Mass was celebrated following the last version of the Roman Missal used before and during the Second Vatican Council. It is different from the missal published in 1970.

Among the differences between the extraordinary form of the Mass and the Masses commonly celebrated in this country are that the entire liturgy is sung in Latin, the priest faces the altar with his back to the congregation, he wears gloves for parts of the liturgy, and a blessing and additional reading of the Gospel are offered after the dismissal.

During the distribution of Communion, the faithful came to the altar rail, where they knelt and received the Eucharist on the tongue. Many women at the Mass wore veils.